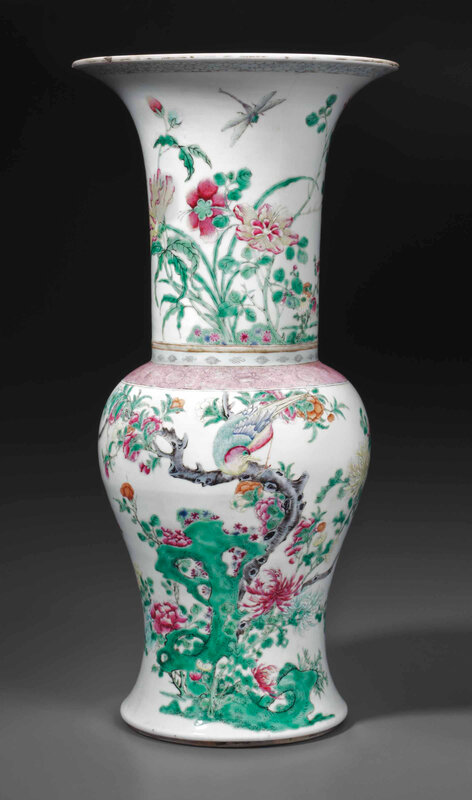 The body is decorated with a bird perched on the trunk of a flowering crabapple tree above chrysanthemum and roses growing around a blue-green rock, all below a pink decorative border on the shoulder, and the neck is decorated with hibiscus and other flowers below a dragonfly shown in flight at the flared rim. There is a double blue line circle on the base.

Property from the Collection of Sarah Jamison Messmore.

Note: A similar white or ivory-glazed vessel, also with incised Yongzheng mark, is illustrated in Qingdai yuyao ciqi, Vol. I, Part 2, Beijing, 2005, pp. 212-3, no. 92. Compare to another Yongzheng-marked vessel of similar form covered in a robin's-egg-blue glaze in the Beijing Palace Museum Collection, illustrated in The Complete Collection of Treasures of the Palace Museum - 37 - Monochrome Porcelain, Hong Kong, 1999, no. 187. See, also, an aubergine-glazed example illustrated in Imperial Perfection; The Palace Porcelain of Three Chinese Emperors: The Wang Xing Lou Collection, Hong Kong, 2004, no. 95, which is incised with a Qianlong seal mark. Also illustrated, no. 74, is a celadon-glazed example with carved decoration, bearing a Qianlong seal mark in underglaze blue, where it is suggested that vessels of this type may have been used to hold not only incense sticks but flowers,

The inspiration for the shape of these vessels may have been small glazed pottery vessels of earlier Tang dynasty (AD 618-907) date, such as the white ware example with cover, illustrated by W. Watson, Tang and Liao Ceramics, New York, 1984, p. 38, no. 14., where the author notes that the slightly greenish tint of the clear glaze on the white body gives the appearance of a cream color.