AMSTERDAM.- Christie’s Post-War and Contemporary Art Amsterdam auction will move to an online-only platform, taking place from 2 to 18 June 2020. Reflecting the breadth of works offered in the highly successful live sale, the new format will offer a survey of contemporary sculpture over the last 60 years, ranging from Shinkichi Tajiri to Yayoi Kusama and from Tony Cragg and Ulrich Rückriem to Isa Genzken. An early pre-war painting by Ernst Wilhelm Nay will be presented alongside works by A. R. Penck, Günther Förg, Arnulf Rainer and Anselm Kiefer to form a focused group of German and Austrian artists. Dutch artists are represented by Rob van Koningsbruggen, Carel Visser, Henk Visch and Bram Bogart. Further highlights include Cap de Boc Marinat (2005, estimate: €250,000-350,000), a monumental painting by Miquel Barceló and Untitled (2000, estimate: €50,000-70,000) by Julian Schnabel. Estimates range from €800 to €350,000 providing opportunities for collectors at all levels.

Miquel Barceló
With its intricate fossilised surface stretching four metres in width, Cap de Boc Marinat (2005, estimate: €250,000-350,000) is a monumental work that exemplifies Miquel Barceló’s tactile, organic painterly language. The work captures the artist’s fascination with nature and decomposition, as well as his experimental approach to painterly textures and materials. German and Austrian Artists
Alive with glowing colour and joyful rhythmic vitality, Menschen in den Lofoten (People in the Lofoten) (estimate: €100,000-150,000) is a visionary work from Ernst Wilhelm Nay’s seminal early series of ‘Lofoten-Bilder (Lofoten Pictures)’. Painted between 1937 and 1938, the paintings were based on watercolours that Nay made while staying on the Lofoten Islands: a majestic, peaceful archipelago off the northwest coast of Norway, where – at the invitation of Edvard Munch – he found a temporary escape from the economic and psychological hardships of Nazi Germany. The work captures the carefree joie de vivre of life on the islands. Günther Förg’s Untitled (2001, estimate: €100,000-150,000) embodies the artist’s assertion that a painting is like a window. A recurrent motif throughout the artist’s multidisciplinary practice, its crossbar shape evolved from Förg’s fascination with the relationship between architecture and art. Contemporary Sculpture
Shinkichi Tajiri saw his three-dimensional icons as reminders of war experiences which had left him with what he described as psychological scars. By giving these demons a form, he hoped it would rid him of their constant presence, as exemplified in Untitled (Samurai) (1961, estimate: €20,000-30,000). Playful, provocative and psychologically charged, Untitled (Phallus Bottle) (1965, estimate: €20,000-30,000) dates from the height of Yayoi Kusama’s radical practice in 1960s New York. An array of soft protrusions sprout organically from a bottle; the entire work is coated in lustrous gold paint. Over three metres in height, Wirbelsäule (1997, estimate: €120,000-180,000) is a largescale sculpture in Tony Cragg’s unmistakable biomorphic style. The sculpture’s rich, honeyed hue, shot through with warm veins of brown, heightens its impression of organic origin but in fact is composed of sanded fibreglass. Tempel (1986, estimate: €50,000-70,000) is a totemic example of Ulrich Rückriem’s celebrated stone sculptures, which stands at around 2.5 metres in height. Its rough-hewn granite surface is incised with a pattern of holes and vertical incisions, imbuing its solid, monumental form with a sense of otherworldly mystery. By contrast, Isa Genzken’s Chicago (1991, estimate: €20,000-30,000) typifies the artist’s exploration of architecture and the experience of urban life. 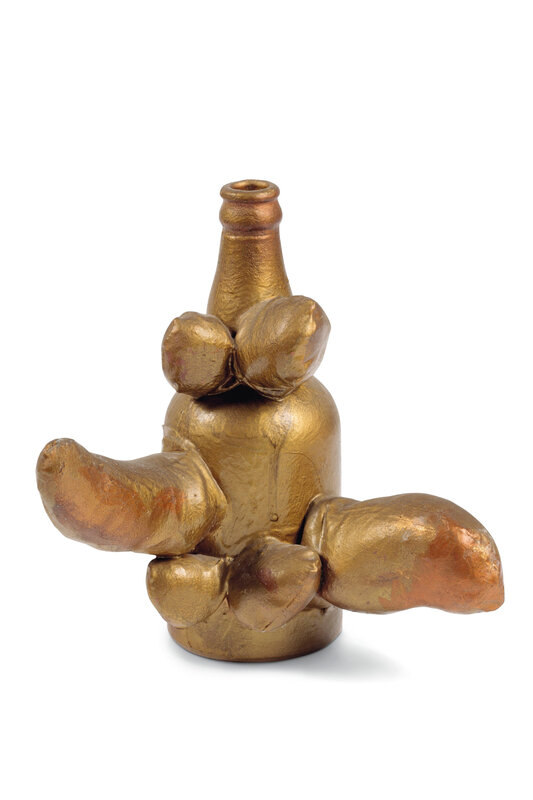 Julian Schnabel
Julian Schnabel is an artist committed to forging his own path in contemporary art history, first as a painter, then as filmmaker, and always as a champion for individualized creativity. Untitled (2000, estimate: €50,000-70,000) contrasts a found image, a perfect composition with bold, gestural brushstrokes which signify his tireless sense of painterly urgency. 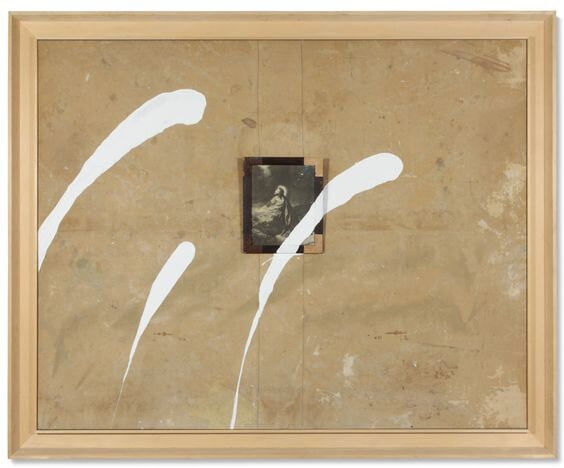 Dutch Artists
With its thick, near-sculptural slabs of colour, Blauwraam (Blue Window) (1965, estimate: €20,000-30,000) is a mesmerising early example of Bram Bogart’s distinctive abstract paintings. Modelled like a window, the work captures Bogart’s architectural conception of the picture plane: Bogart treated his supports more like walls than painterly surfaces, often working flat on the floor and conceiving his creations as objects in their own right. Carel Visser’s Romeo and Juliet (circa 1958, estimate: €20,000-30,000) is a minimalist representation of forms and patterns found in nature which the artist used as inspiration throughout his career as a means of exploring symmetry and balance. Following the extensive exhibition in 2019 at the Kunstmuseum Den Haag, Rob Van Koningsbruggen’s Geel Rood Blauw II over I III over I (Yellow Red Blue II over I III over I) (1975, estimate: €20,000-30,000) completes the group. 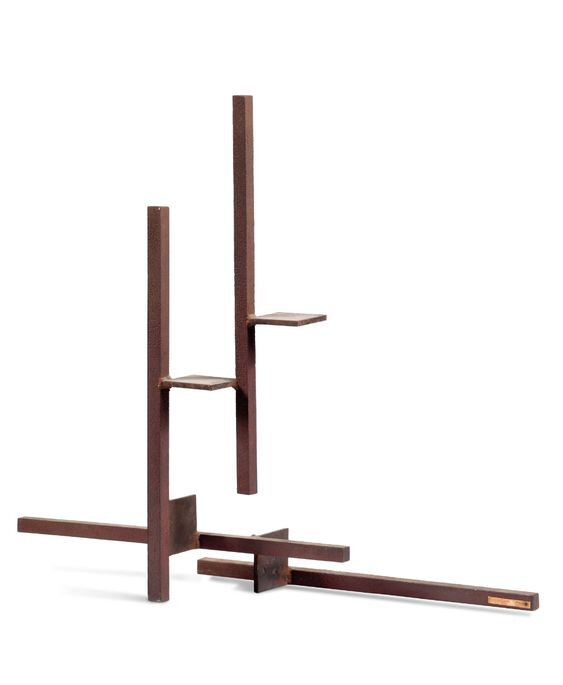