A selection of archaic bronzes from the Jane and Leopold Swergold Collection at Christie's New York, 15-16 March 2015

A selection of archaic bronzes from the Jane and Leopold Swergold Collection at Christie's New York, 15-16 March 2015 The body is horizontally grooved below a band of dissolved dragons confronted on abstract taotie masks, which is repeated on the cover below a shallow groove encircling the circular, collared handle, which is pierced on two sides, and acts as a pedestal foot when the cover is inverted. The body is applied with a pair of animal-head handles with coiled horns suspending loose rings which flank the incurved rim, and is raised on three paw supports issuing from animal heads that join the supports to the ring foot. The mottled patina is of yellowish-green color.

Note: Compare the present piece to a gui of this type illustrated by J. Rawson in Western Zhou Ritual Bronzes from the Arthur M. Sackler Collections, Arthur M. Sackler Foundation, Washington DC, 1990, vol. IIB, no. 56, and an excavated example, the Wang Chen gui from Shaanxi, Chengcheng Xian, dated Middle to late Western Zhou, fig. 56.7, which has the same profile and handles, but a ribbed rather than grooved body. The Sackler vessel, dated to late Western Zhou, has a similarly grooved body and decorative bands on the body, cover and ring base, but the handles are of C-scroll form issuing from animal masks with short snouts, projecting tusks, and flat ears, mirroring the ears of the taotie masks around the foot ring. Compare, also, a gui of similar proportions and with fluted sides, but without the grooved scrolls and eyes on the base and cover, illustrated in Important Inscribed Ancient Chinese Bronze Vessels from the Li Yingshuan Collection, The Shanghai Museum, 1996, p. 81. no. 32. The vessel is raised on four flat scrolled dragon supports and is cast with a band of interlaced dragon scroll below the rim. The loop handle is formed by the arched body of a dragon with its mouth biting the rim and its head surmounted by two confronted dragons with truncated bodies. The surface exhibits pale green encrustation.

Note: The yi was a water vessel that was used in conjunction with a pan for the ritual washing of hands. It was a late Western Zhou adaptation of the gong or the he, and continued into the Eastern Zhou period.

Of the similar yi published, none appears to have plain sides below the band of interlaced dragon scroll and none appears to have as intricate a dragon head terminal on the handle as does the present example. See the similar related yi decorated with a band of interlaced dragon scroll above ribbed sides excavated at Luoshan, Henan province, illustrated in Wenwu, 1980:1, pp. 51-2, fig. 2; and another illustrated by B. Karlgren, 'Yin and Chou in Chinese Bronzes', B.M.F.E.A., No. 8, Stockholm, 1936, pl. XLV, C 39. The lower tripod bowl is of li shape and is raised on three legs. It is decorated with taotie masks and applied with two arched handles. The upper bowl has a flaring rim and two free-standing dragon handles, and the interior base is perforated with cruciform steam vents. Each section is decorated below the rim with a shallow-relief band of scrolling birds on a leiwen ground, and has heavy areas of malachite encrustation. 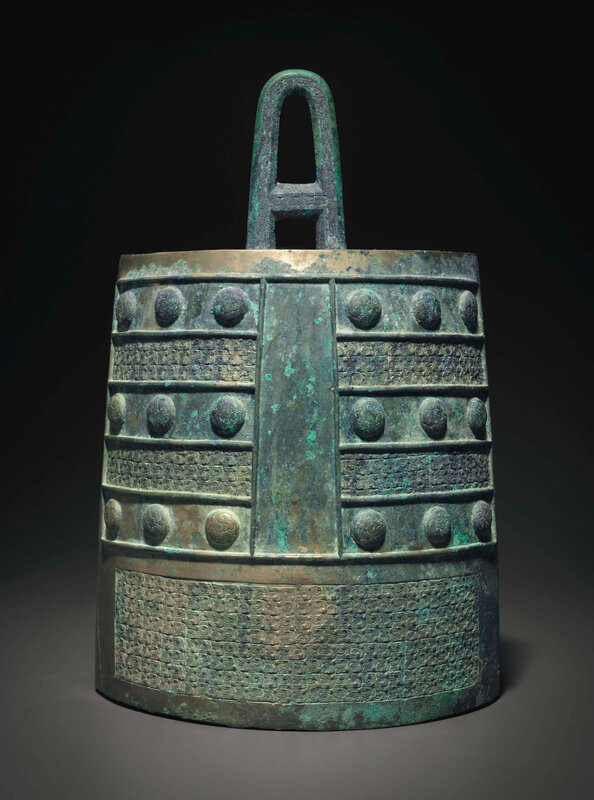 The heavily cast bell is of oval section and is decorated on each side with a plain, central, vertical panel dividing two quadrangular panels outlined by raised thin borders, each enclosing three horizontal rows of three rounded bosses decorated with whorl motifs, and dividing bands of dense overlapping scroll motifs interspersed with small knobs. The latter pattern is repeated in a wide band above the mouth, and on the flat top below the 'A'-shaped loop handle, which is decorated with shell motifs. The silvery grey bronze shows an uneven patination, with areas of bright malachite-green and azurite-blue encrustation on the surface, stand.

Note: Compare a smaller, very similarly-decorated bell, but with dragon-form handle, in the St. Louis Art Museum, illustrated by George W. Weber, Jr. in The Ornaments of Late Chou Bronzes, A Method of Analysis, New Jersey, 1973, pl. 50, p. 242, and a related, yet smaller, bell from the Pillsbury Collection, Minneapolis Institute of Art, pl. 49. The bulbous vessel and the cover are cast in mirror image so that the cover, when inverted, can be used as a bowl. Both are flat-cast with two different bands of a repeating pattern of intertwined serpents on a granular ground, and the slightly recessed bands at the rims are also decorated, as are the faceted loop handles. The spreading ring surmounting the cover is centered by a flower head encircled by three further serpents with split and entwined bodies. There is light encrustation in the interior and on the exterior. Both flasks are of flattened oval form, with the curve of the sides accentuated by shallow recessed panels that flank the pair of loop and loose ring handles on the narrow sides. One is raised on a spreading rectangular foot, and the other on an oval foot. Both of the slightly domed covers have a band of chilong scroll encircling the small loop finials. Both vessels have mottled olive-brown and green encrustation.

Commentaires sur A selection of archaic bronzes from the Jane and Leopold Swergold Collection at Christie's New York, 15-16 March 2015