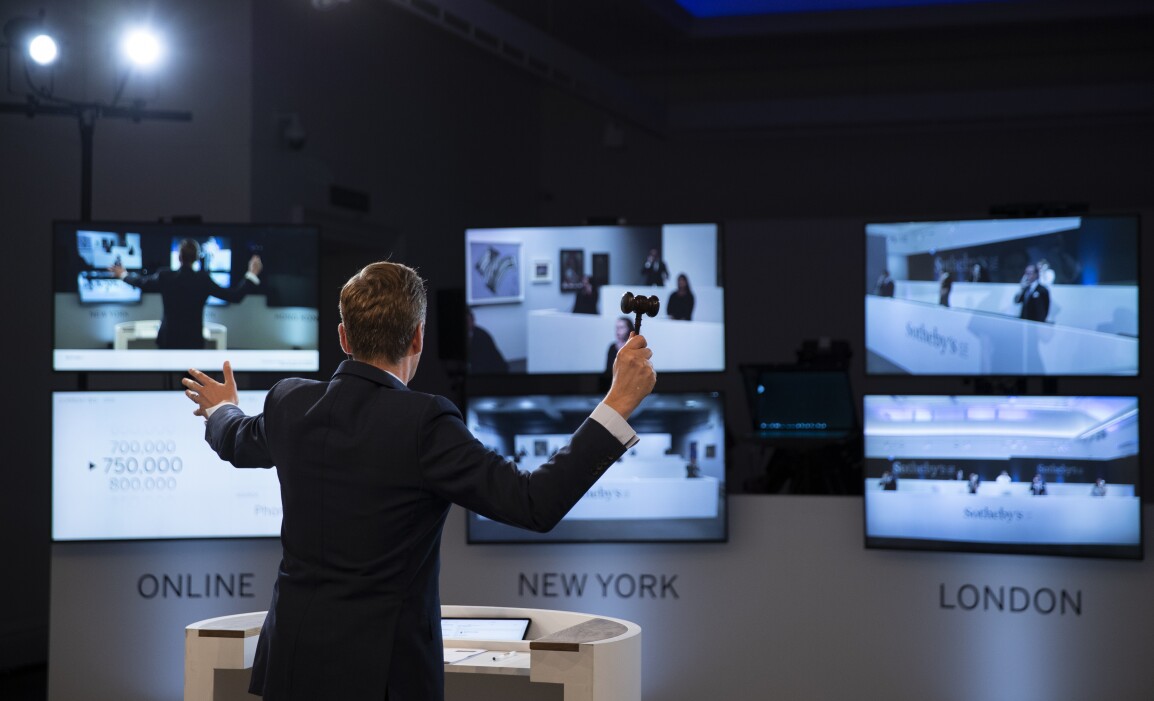 29 June 2020 – Oliver Barker, Chairman of Sotheby’s Europe, and tonight’s auctioneer said, “Being on the rostrum tonight was like being at the epicentre of a cinematic production. We would never have envisioned, even a few months ago, that it would be possible to hold a series of flagship New York sales as an unprecedented live-streamed event, with banks of telephone- bidding colleagues beamed in from around the world. But, just as throughout its 276-year history, Sotheby’s was ready to pivot at a moment’s notice – and tonight we redefined the boundaries of what is possible.”

Grégoire Billault, Head of Sotheby’s Contemporary Art Department in New York, commented: “There is no artist more perfect to star in a new, ground-breaking auction format than Francis Bacon. His masterful triptych has long been celebrated in museum exhibitions, and tonight it left its mark on the market, setting a new benchmark for any bid ever cast online – $73.1 million – before hammering down as the third highest price ever paid for the artist at auction. Witnessing heated competition from New York, London and Hong Kong in real time tonight, it’s clear that the market is very much alive and that the door has been opened to the future of auctions.”

David Galperin, Head of Sotheby’s Evening Auctions of Contemporary Art in New York, said: “The depth of bidding was seriously impressive tonight, with heated competition for a wide range of works; from six bidders battling for the exquisite early 1962 Judd wall relief, to the 20+ collectors who competed for the exceptional Matthew Wong painting that opened our various-owner auction, the night was full of moments we will all remember. The enthusiasm for exceptional works of art reiterated the great demand for quality that stands strong in the market. Our sales were anchored by works emerging from two exceptional private collections. The Ginny Williams Collection began a great evening for female artists overall, and it was particularly poetic to see the same painting for which Ginny set an auction record for Helen Frankenthaler’s work in 2011 smash another record price for the artist tonight. The success of the grouping assembled by Harry W. and Mary Margaret Anderson—with landmark results for significant works by Clyfford Still, Sam Francis, and Richard Diebenkorn— was a testament to their lasting legacy as among the most transformative collectors of Post-war American art, and market yet another season of great results for postwar American abstraction at Sotheby’s.”

Julian Dawes, Sotheby’s Head of the Impressionist & Modern Art Evening Sale in New York, remarked: “We are thrilled with the results from tonight’s sale, which was marked by tremendous lot-by-lot successes, led by Pablo Picasso’s stunning Head of a Sleeping Woman, a new auction record for Wifredo Lam, and more strong results from The Vanguard Spirit, one of the most distinguished collections of Surrealist & Modern art that has come to market in recent memory. The group of Surrealist women artists from The Vanguard Spirit surged to achieve several new artist records for Leonor Fini, Remedios Varo, and Alice Rahon, with all of them and others far surpassing their high estimates. These results showcase how Surrealism continues to grow as a category to include more diverse artists from around the world and achieve new benchmarks that compete with their peers. As the market continues to embrace new artists, alongside strong results from established mainstays, there is no doubt the market remains resilient and growing, as tonight’s sale clearly showed.”

Anna Di Stasi, Sotheby's Director of Latin American Art, commented: “Tonight’s groundbreaking result for Wifredo Lam’s masterpiece Omi Obini, also from The Vanguard Spirit, not only resoundingly set a new auction record for the artist, but it also asserts Lam’s place as one of the premier Surrealist artists of his time. The undisputed masterpiece ranks among his finest works, comparably perhaps only to his well-known painting The Jungle, in the permanent collection of MoMA in New York. In the same vein, the Chilean artist Mario Carreño’s Cortadores de caña also established a new auction record, and is one of the most iconic images of la vanguardia Cubana. Since Sotheby’s began featuring Latin American artists in the Impressionist & Modern Art Evening Sales rather than separate Latin American Art sales, we have seen them continue to achieve record prices each season, and The Vanguard Spirit emphatically asserted that trend.”

Each sale offered works emerging from notable private collections, including:

18 works from The Ginny Williams Collection were 100% sold, totaling $65.5 million

10 works from the Collection of Harry W. and Mary Margaret Anderson were 100% sold, totaling $66.3 million

The evening opened with a dedicated ‘white glove’ auction (100% sold) of 18 works from the collection of Ginny Williams, the trailblazing dealer and collector of Abstract Expressionist and contemporary art

Featuring works by trailblazing female modernists, the sale featured three works by Joan Mitchell that together achieved $22.7 million. The group was led by Straw from 1976, which sold for $8.8 million (estimate $5/7 million). Mitchell’s Garden Party from 1962 achieved $7.9 million (estimate $4/6 million) - at the time marking Sotheby’s highest-ever price for a work sold to an online bidder, which was surpassed later this evening Williams set a new world auction record for the artist when she acquired Royal Fireworks in 2011.

The luminous and monumental canvas extending nearly 15-feet across is a masterpiece from her highly acclaimed period of production in the mid-1970s.

The previous Frankenthaler record was set at Sotheby’s in May 2018 when Blue Reach sold for $3 million in our Contemporary Art Day Auction.

Lee Krasner’s Re-Echo from 1957 led the auction, achieving $9 million (estimate $4/6 million) - the second- highest price for the artist at auction. 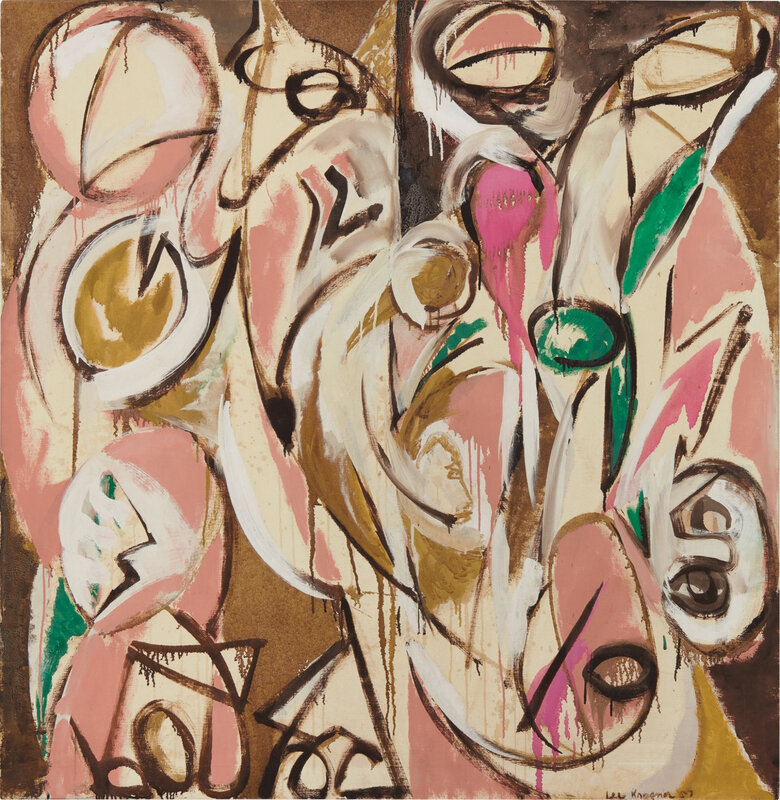 Sotheby’s sales of works from The Ginny Williams Collection continue throughout 2020, including in tomorrow’s Contemporary Art Day Auction as well as a dedicated sale of Photographs from the collection on 14 July.

The two Contemporary Art auctions this evening together achieved $300.4 million - surpassing our November 2019 evening total for the category ($270.5 million)

The Contemporary auction was led by Francis Bacon’s large-format masterpiece Triptych Inspired by the Oresteia of Aeschylus from 1981, which sold for $84.6 million - surpassing its $80 million high estimate and marking the third-highest price for the artist’s work at auction

The work sold to a phone bidder with Grégoire Billault of Sotheby’s NY Contemporary Art Department following a ten-minute bidding battle with an online bidder participating from China.

The work is one of 28 large-format triptychs that Bacon created between 1962 and 1991, and only the 6th example ever to appear at auction.

Inspired by Aeschylus’s trilogy of Greek tragedies dating to the 5th century B.C., the present triptych stands as one of the most ambitious, enigmatic, and important works of Bacon’s oeuvre, and a landmark of 20th century art.

Acquired in 1984 by the Norwegian collector Hans Rasmus Astrup, the triptych has been in the care of Astrup Fearnley Museet in Oslo since its founding by Mr. Astrup in 1993.

A spectacular group of abstract masterpieces from the Collection of Harry W. and Mary Margaret Anderson highlighted the auction. All 10 works were sold, for a total of $66.3 million

One of the finest works by the artist to appear at auction since Sotheby’s 2011 sales on behalf of the city of Denver to benefit the Clyfford Still Museum. Jean-Michel Basquiat’s masterwork ‘Untitled (Head)’ achieved $15.2 million, marking a new world auction record for a work on paper by the artist, as well as Sotheby’s highest-ever price for a work sold to an online bidder (following the Mitchell earlier this evening), following an eight minute bidding battle. The work represents one of the most accomplished of Basquiat's iconic ‘Heads’ on paper. Sotheby’s offered a number of artists for the first time in our Contemporary Art Evening Auctions, including:

Vija Celmins, whose Night Sky #7 sold for $6.6 million – a new world auction record for the artist. The painting was included in Celmins’s major retrospective at The Metropolitan Museum of Art, New York in 2019. 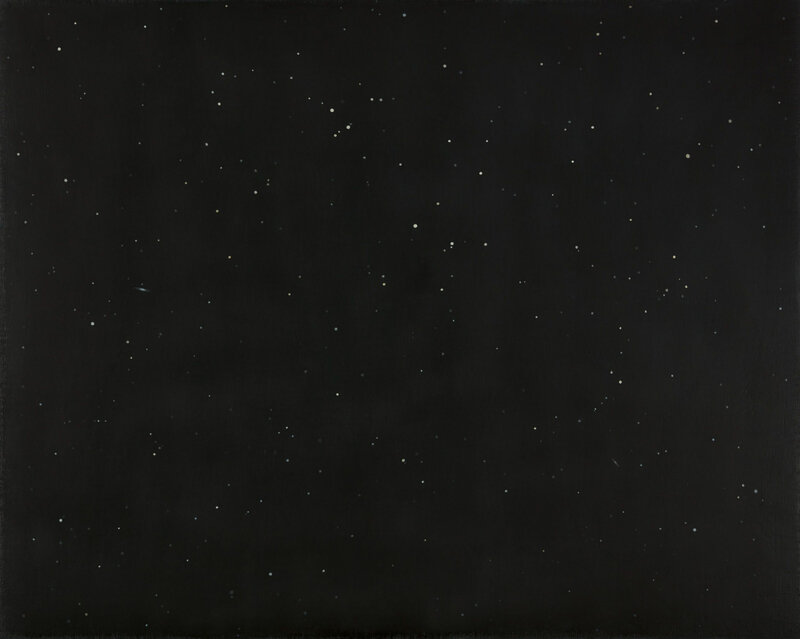 Matthew Wong, whose The Realm of Appearances sold for $1.8 million – a new world auction record for the artist (estimate $60/80,000). Sotheby’s established the previous record of $62,500 in our online Day Auction in May.

Tonight’s auction featured Roy Lichtenstein’s White Brushstroke I from 1965, which sold for $25.4 million. The work is one of the most striking examples from Lichtenstein’s iconic series of Brushstroke paintings, which comprises 15 canvases executed in 1965-66 that are regarded as pivotal masterworks of the Pop Art movement. The final auction of the night featured 11 works from The Vanguard Spirit, which together achieved $26.6 million and set 5 new world auction records (estimate $16.3/23.7 million). The collection represents one of the most distinguished private assemblages of Surrealist and Modern Art from Latin America ever to appear at auction.

The group was led by Wifredo Lam’s Omi Obini from 1943, which sold for $9.6 million – a new world auction record for Lam.

Painted at the apex of Lam’s career, the painting is only comparable to his masterwork The Jungle, also from 1943, which resides in the Museum of Modern Art, New York’s permanent collection 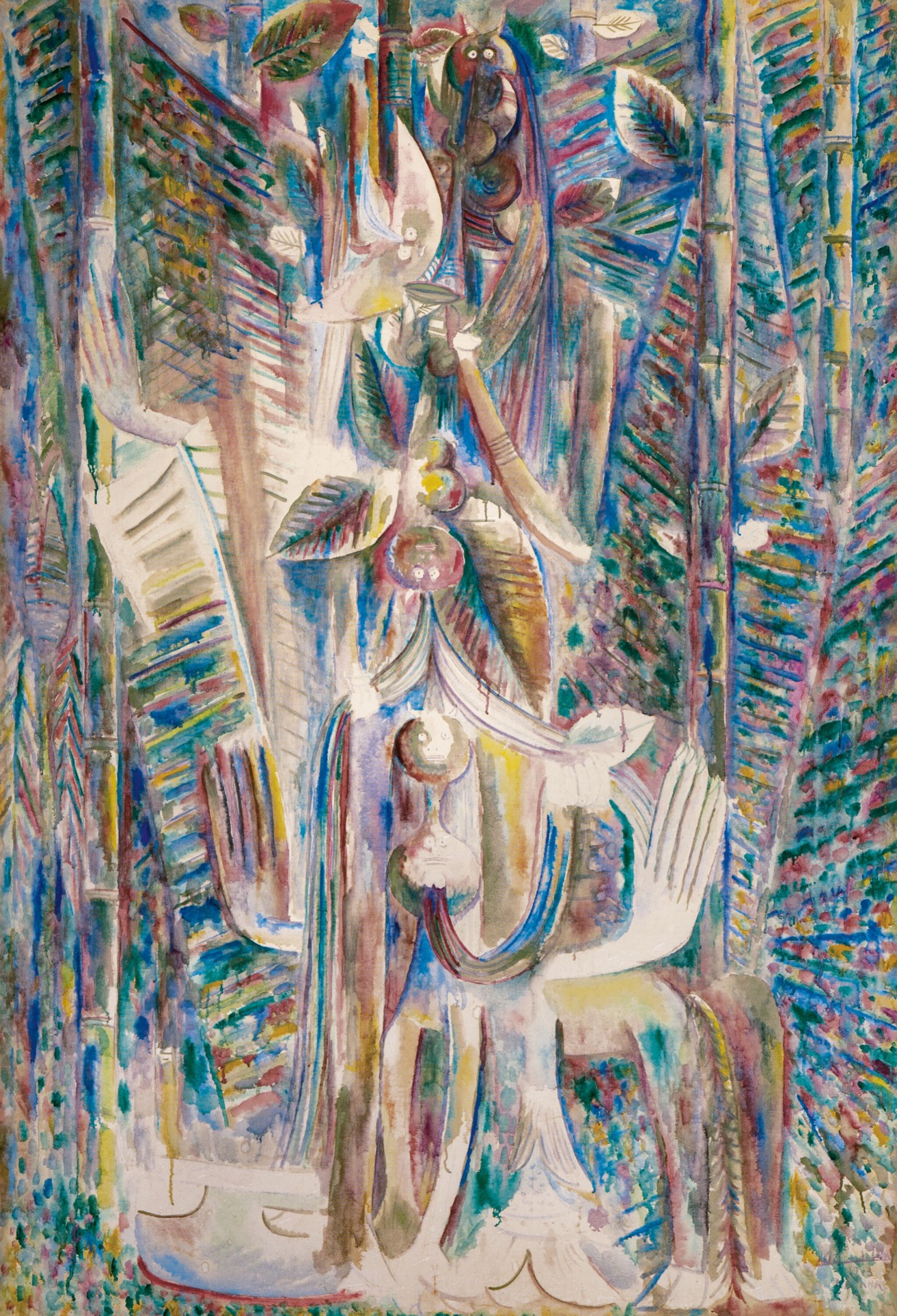 Seven works by women Surrealists in the collection totaled $13.7 million, led by two oils by Remedios Varo: Armonía (Autorretrato Sugerente) from 1956 which brought $6.2 million – a new world auction record for the artist; and Microcosmos (or Determinismo) from 1959 which achieved $1.8 million.

Realized in the final years of Varo’s life, the two works are exemplary of her signature fantastical imagery and complex narratives.

The previous auction record for Varo was $ 4.3 million, set at Sotheby’s in November 2014. Additional world auction records for female Surrealist artists were achieved for Leonor Fini, whose Figures on a Terrace (Composition with Figures on a Terrace; La Terrasse) from 1938 sold for $980,000 and Alice Rahon, whose Los Cuatro hijos del arco iris from 1960 brought $512,000.

One of the most iconic images of la vanguardia Cubana, the work was included in the landmark MoMA exhibition Modern Cuban Painters, organized in 1944 by Alfred H. Barr.

The previous auction record for Carreño was $2.6 million, established for another 1943 work sold at Sotheby’s in May 2007. 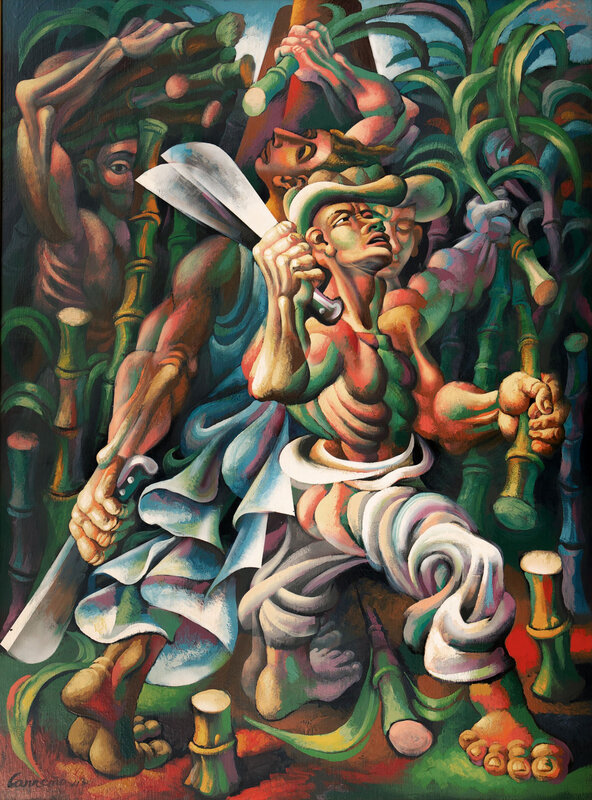 The running total for The Vanguard Spirit is $29.2 million, with additional works to be offered in.

The final auction of the night was led by Pablo Picasso’s 1934 depiction of his golden muse Marie-Thérèse Walter, Tête de femme endormie (Head of a Sleeping Woman), which sold for $11.2 million.

The work last appeared at auction in 1960, when it sold for £4,500 GBP, and has remained in the same collection for seven decades since it was acquired by Carmen and David Lloyd Kreeger in 1962. Two other works by Picasso also brought strong prices: Femme assise from 1929, a Surrealist painting which depicts his first wife, Olga Khokhlova, sold for $4.8 million; and Le reservoir, one of his finest landscape paintings from the 1950s, achieved $2.9 million. 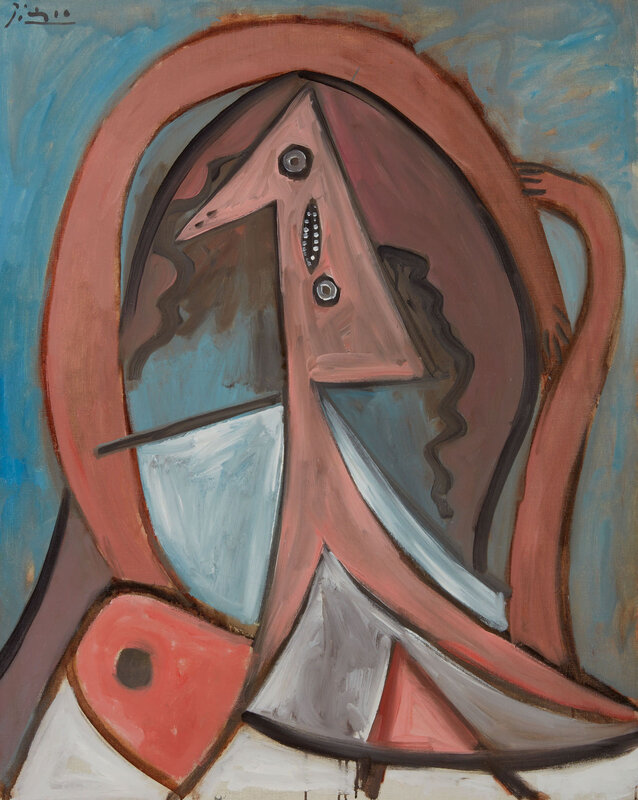