THE HAGUE.- The Mauritshuis has acquired a portrait of Jakob Omphalius, painted by Bartholomäus Bruyn the Elder. This reunites a husband and wife who were separated at an auction almost 125 years ago.

The Cologne painter Bruyn immortalised Jakob and his fiancée Elisabeth shortly before their marriage in 1539 in two panels that together form a diptych. The acquisition of the panel is an important addition to the Dutch public art collection since the reunited couple represent Northern European portrait art at its highest level. The purchase of the portrait of Jakob Omphalius this spring was made possible with the support of the BankGiro Lottery, the Vereniging Rembrandt (thanks in part to its Schorer Romeijn Grothe Fonds and its Themafonds Middeleeuwen en Renaissance) and a private donor.

Bittersweet
Some 350 years ago, the couple were literally joined together in a ‘diptych portrait’: two panels that were attached to each other with hinged frames. Jakob appears behind a stone parapet, which he leans on with his right arm. The parapet continues through into the portrait of his fiancée Elisabeth Bellinghausen, strengthening the visual unity of the two portraits. Jakob has a folded letter in his hand, while Elisabeth holds a sprig of bittersweet as a token of her love. The braids that protrude from her pearl-encrusted cap indicate that she was not yet married when the portrait was painted. The details of the clothing have been magnificently rendered: the red velvet sleeves, the soft fur of his cloak and the embroidery on the shirt. Together with the striking turquoise background, red and gold form the most important colours in the paintings.

Separation and Reunion
Elisabeth lost her husband – or rather the portrait of her husband – in 1896, when the diptych was sold at an auction in London. In 1912 her portrait ended up in the collection of the Rijksmuseum, which in 1951 gave it to the Mauritshuis on long-term loan. Which is where Elisabeth hung alone, the identity of her husband and whereabouts of his portrait no longer known. Twenty years ago, however, Ariane van Suchtelen, curator of paintings at the Mauritshuis, uncovered an old photograph of the portrait of Jakob Omphalius at the RKD – Netherlands Institute for Art History. Also at the RKD was the catalogue from an 1896 auction, which contained sketches of the family coats of arms that appeared on the back of the paintings. Clever detective work led to Jakob and Elisabeth being linked via these coats of arms. But Jakob’s whereabouts continued to be a mystery. Until May 2019, when he turned up in a small auction house in Paris as a ‘portrait of an unknown man’. Galerie De Jonckheere in Geneva purchased the portrait, unaware of the sitter’s identity. It was only when a curator from a German museum tipped off a curator at the Rijksmuseum that the Mauritshuis too became aware that Jakob had been found and an effort to reunite the couple could be launched. After Jakob was first on view at TEFAF in Maastricht, he was finally reunited with Elisabeth after 125 years.

Bartholomäus Bruyn
Bartholomäus Bruyn the Elder (1493-1555), known as ‘the Elder’ because his son of the same name also became a painter, was in great demand as a portrait painter – an entire generation of Cologne dignitaries was painted by him. Characteristic of his portraits are the lifelike details in the faces and hands, the use of vivid colours and the meticulous rendering of clothing and props. Bruyn received very few commissions for independent portraits – his output consisted mainly of engagement and marriage portraits in the form of diptychs.

Jakob Omphalius
Jakob Omphalius (1500-1567) was a prominent lawyer and scholar in Cologne. He studied in Cologne, Utrecht and Leuven, graduated in law from the Sorbonne in Paris in 1529-30 and again in Toulouse in 1532-33. He occupied various high-ranking posts, lectured in law at the University of Cologne and in 1559 was elevated to the nobility. The dates for Elisabeth Bellinghausen’s birth and death are not fixed – in her portrait she appears considerably younger than her fiancé. She and Jakob would go on to have 13 children, and after his death Elisabeth remarried.

New Frames and Conservation Treatment
New frames for the portraits of Jakob Omphalius and Elisabeth Bellinghausen have been made, based on another example by Bruyn. As a result, the portraits once again look like a diptych as they were originally intended (the original frames had been largely lost).

The portrait of Elisabeth has previously undergone extensive conservation treatment at the Mauritshuis. The ‘diptych’ will be displayed in the museum until 4 October, after which time the portrait of Jakob will also undergo extensive treatment in the museum’s conservation studio. The paintings, which now both form part of the Dutch national art collection, will then once again be on view as a diptych in the Mauritshuis. 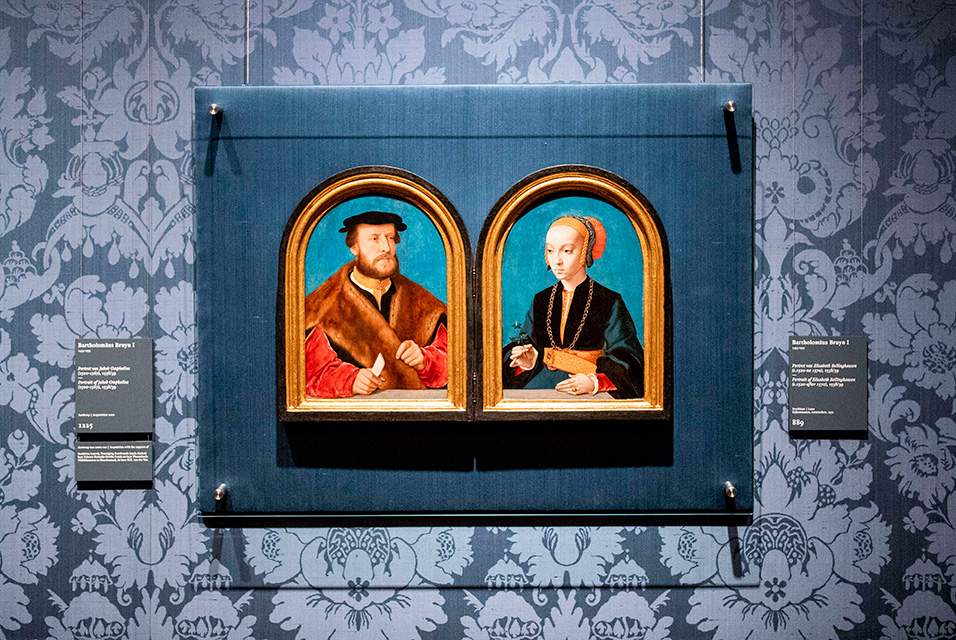 Portraits of Jakob Omphalius and Elisabeth Bellinghausen by Bartholomaeus Bruyn (1493–1555) are pictured during its press presentation at the Mauritshuis art museum in The Hague, on June 30, 2020. The acquisition brings a bridal couple back together that was separated at auction almost 125 years ago. The Cologne painter Bruyn immortalized Jacob and his fiancée Elisabeth Bellinghausen, shortly before their marriage in 1539, on two panels that together form a diptych. Sem VAN DER WAL / ANP / AFP.
Posté par : Alain Truong à 12:26 - Art du XVème siècle / 15h century Art - Commentaires [0] - Permalien [#]
Tags : Bartholomäus Bruyn the Elder