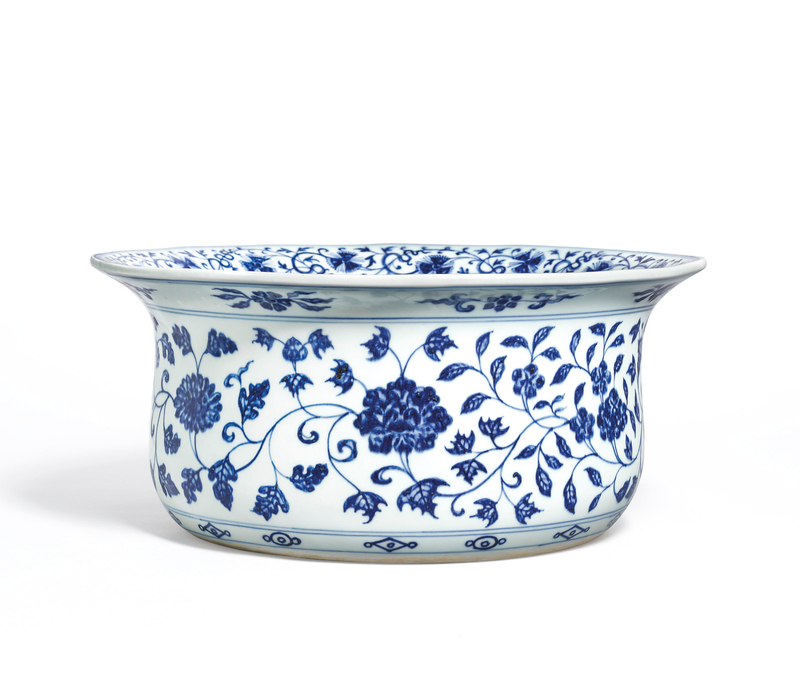 The interior of the vessel is finely painted in vibrant shades of cobalt blue to depict a large open-form flower, with each petal containing an auspicious emblem. The flower is encircled by a keyfret border, with the interior of the walls decorated with seven stylised lotus blooms supported on leafy scrolls, below a narrow band of floral sprays to the splayed mouth. The exterior is further decorated with seven various flower blooms with leafy scrolls, including peony, yellow hibiscus, chrysanthemum, camellia, crab-apple, convolvulus (morning glory) and lotus. The base is left unglazed, box.

Note: This exceptional Yongle basin belongs to a small group of porcelain vessels decorated in underglaze cobalt blue, which are of a shape inspired by vessels from the Near East, where it was produced both in metal and in glass. A 14th century Syrian enamelled glass example (d: 29.2 cm.) in the collection of the Metropolitan Museum, New York, is illustrated by John A. Pope, Chinese Porcelains from the Ardebil Shrine, Philip Wilson, London, 1981, plate 135, B. Compare also a Syrian/Egyptian brass basin with silver inlay dated to the 14th century in the Metropolitan Museum of Art, illustrated by Feng Xianming, ‘Yongle and Xuande Blue-and-White Porcelain in the Palace Museum’, Chinese Ceramics Selected Articles from Orientations 1982-1998, Hong Kong, 1999, p. 177, fig. 10 (fig. 1); where it is illustrated together with a Yongle blue and white basin in the Palace Museum. A further inlaid silver metalwork example dated to 13th-14th century Egyptian Mamluk period is now in the collection of the Los Angeles County Museum of Art, and was exhibited at the Hayward Gallery and published in The Arts of Islam, Arts Council of Great Britain, London, 1976, p. 189, no. 213. The authors of this exhibition catalogue point out that these basins follow a form that was already known in Syria and Egypt in Ayyubid times (AD 1238-40) and refer to one in the same volume, cf. ibid., p. 181, no. 198. This earlier version, however, lacks the very slightly waisted, straight sides and the sharp angle to a flattened rim that is characteristic of the later form that inspired the Chinese porcelain basins. A further example in the collection of Nasser Sabah al-Ahmad al-Sabah is illustrated in Islamic Art in the Kuwait National Museum, The al-Sabah Collection, Marilyn Jenkins (ed.), London, 1983, p. 94. 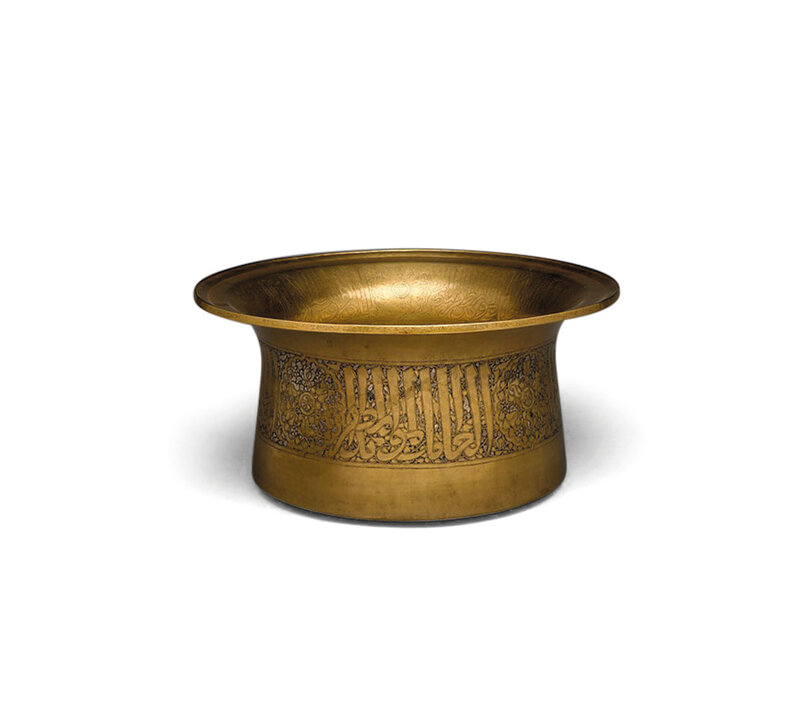 The inclusion of these Yongle porcelain basins in the Chinese imperial collections, and the fact that none appears in the Ardebil collection, and only one in the collection of the Topkapi Saray in Istanbul (illustrated by J. Ayers & R. Krahl, Chinese Ceramics in the Topkapi Saray Museum Istanbul, vol. II, London, 1986, p. 516, no. 611, and colour plate on p. 421), suggests that these vessels, despite their foreign form, were in fact intended for elite patrons in China, and not as export wares. Further evidence of this basin form being appreciated by the Chinese court is that it also appears in the Xuande reign, and an example bearing a Xuande reign mark is published in Chinese Ceramics from the Museum Yamato Bunkakan, illustrated catalogue Series no. 7, Nara, 1977, no. 134. It is also significant that this was a form that was copied, with its original decorative schemes in the reigns of the great Qing emperors. A Yongzheng example, for example, is preserved in the collection of the Palace Museum, Beijing (illustrated in Gugong bowuyuan cang – Ming chu qinghua ci, Beijing, 2002, xia ce, pp. 364-5, no. 196).

In the Yongle reign, porcelain basins of this form were made in a variety of sizes from those with a mouth diameter of 16.5 cm., to those with a mouth diameter of 34.9 cm., all ornamented with a variety of decorative schemes on the interior and a floral scroll of some kind on the exterior. The current basin is one of the larger vessels. Judging from published extant examples, it appears that only the larger Yongle basins are decorated with a complex dianthus band on the rim, and with a ring of lotus petals enclosing auspicious emblems on the centre of the interior, as opposed to a band of waves on the rims with arabesque design on the interior seen on most of the mid-sized and small-sized examples.