A magnificent polychrome-enamelled model of a celestial official, Ming dynasty (1368-1644)

A magnificent polychrome-enamelled model of a celestial official, Ming dynasty (1368-1644) 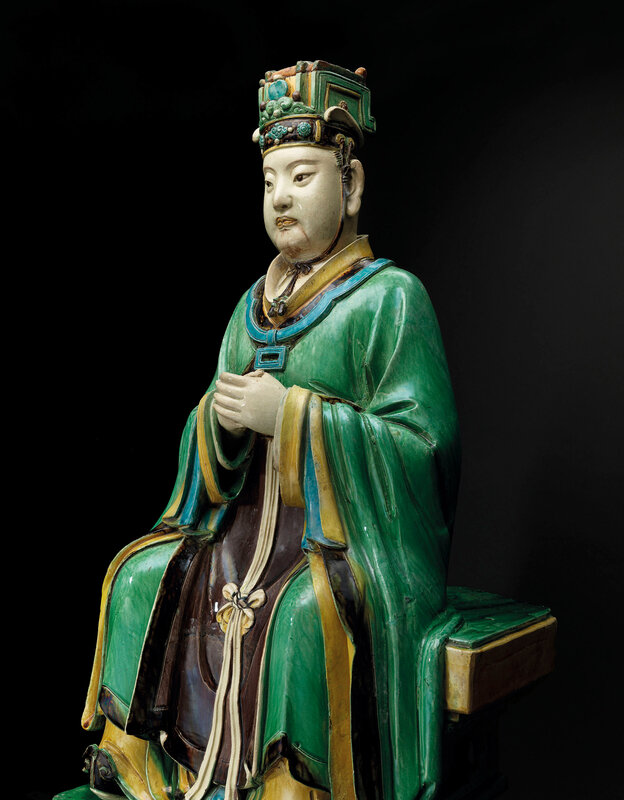 The large figure is decorated in colourful shades of green, yellow, aubergine, turquoise and cream, modelled wearing long flowing robes and an ornate hat with the hands clasped together to hold a tablet in front of the chest. He is depicted seated upright on a throne with a separate base, supported on cabriole legs detailed with monster masks.

Note: It is highly probable that the current figure belongs to the group of seven figures of Daoist deities from the Morgan family collection, which was sold after Louise C. Morgan’s death on the premises of the family home ‘Salutation’ West Island, Glen Cove, New York, 29 May 1974, as lots 76, 77, 78, 124, 125, 126 and 127. The current lot appears to have been lot 76 within this group.

Three other figures from this group have reappeared on auctions, two of which, from the Estate of Bernice Richard, were sold at Christie’s New York, 2 December 1993, lot 276 and the third sold at Sotheby’s New York, 17 September 2013, lot 49. Compare also to two further figures of similar modelling and dimension to the Morgan group, one from the Helliot Collection, Paris, was sold at Christie’s New York, 23 June 1983, lot 136, and illustrated by Anthony du Boulay in Christie’s Pictorial History of Chinese Ceramics, Oxford, 1984, p. 179, no. 3 (fig. 1); the second, missing its base, from the collection of Carolyn Trippe, Palm Beach, Florida, was sold at Sotheby’s New York, 16 September 2015, lot 467.

Both Buddhist and Daoist sancai-glazed stoneware figures were popularly commissioned during the Ming dynasty. For a similar sancai Daoist figure seated on a multi-tiered pedestal, representing the deity Yuan Shi Tian Zun (The Primal Celestial Excellency), from the Tsui Art Foundation, Hong Kong, see Stephen Little, Taoism and the Arts of China, Chicago, 2000, no. 68 (203 cm. high). Another figure also representing Yuan Shi Tian Zun (123.3 cm. high) with several unglazed areas including the hair, flesh and shoulder medallions, and a Budai figure (119.2 cm. high) similar in style and palette to the Morgan group dated to the 20th year of Chenghua period (1484) by inscription from the British Museum, are illustrated in Jessica Harrison-Hall, Ming Ceramics in the British Museum, London, 2001, nos. 19:1 and 19:2.

Compare also to a smaller but closely related sancai-glazed figure of the Daoist God of Literature, Wenchang in the Royal Ontario Museum (86 cm. high), illustrated in Henry Trubner, Royal Ontario Museum, The Far Eastern Collection, Toronto, 1968, p. 72, no. 90; and to another figure of Daoist deity (60.3 cm. high) dated to the 17th year of Chenghua period (1481) in the Metropolitan Museum of Art, New York, accession number: 1971.163.