A Dehua figure of Guandi on a horse, Late Qing dynasty

A Dehua figure of Guandi on a horse, Late Qing dynasty 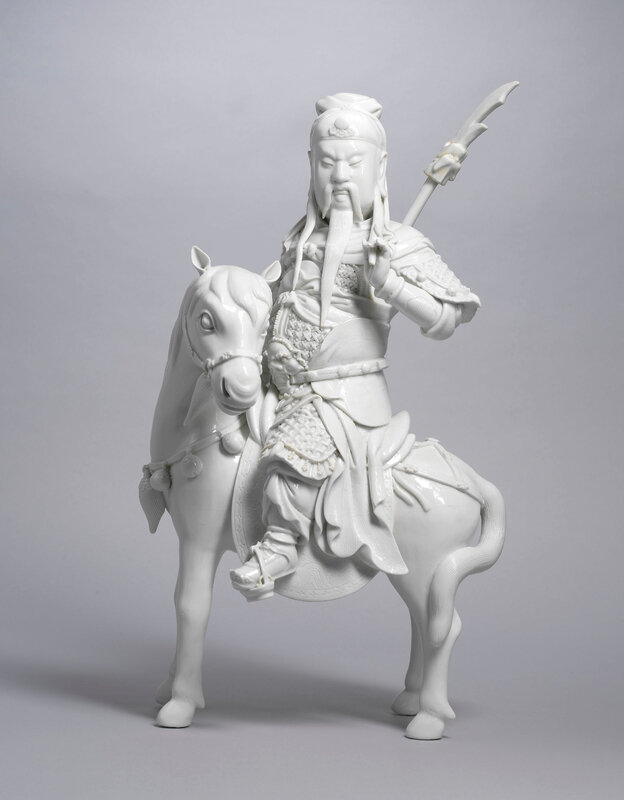 The figure is meticulously potted depicting the legendary warrior Guandi dressed in elaborate armour, holding his famous weapon Green Dragon Crescent Blade in one hand, and riding on his loyal horse the Red Hare. The back is impressed with an illegible potter’s seal. The figure is covered overall with an even glaze of a cool white tone, box.

Note: Jars of this form in blue and white are extremely rare, as they are more commonly found in monochrome glazes and applied with bands of bosses and a pair of mask-form handles. For a nearly identical Qianlong-marked blue and white barrel-form jar, see an example sold at Christie’s Hong Kong, 27 May 2008, lot 1581. It is also interesting to compare with a small blue and white garden barrel-form stool (25.1 cm. high) dated to the Kangxi to Qianlong period in the Boston Museum of Fine Arts, illustrated in Cornelius Osgood, Blue and White Chinese Porcelain - A Study of Form, New York, 1956, no. 56, which shares a similar floral decoration but with the addition of applied bosses.

Commentaires sur A Dehua figure of Guandi on a horse, Late Qing dynasty