of elegant proportions, the rectangular seat frame of standard mitre, mortise and tenon construction with a soft matted seat, the rounded edge of the seat frame moulded downwards and inwards into a narrow flat band, resting on a short straight waist and a beaded-edged apron carved with archaistic kui dragons, the apron further continuing into thick legs terminating in incurved hoof feet, all below the shaped back and arms with subtly sloping ends bordered with raised bands, the arms superbly carved in low relief on both sides with kui dragons with sinuous bodies, some accented with scrollwork, the design skilfully echoed on the front of the back panel.

Note: This attractive couch-bed (luohanchuang) represents one of the most elegant and recognisable forms of Chinese classical furniture. Its powerful incurved feet and convex apron impart a sense of stability and strength, while the three solid panels with subtly sloping ends would have framed the sitter to provide both an intimate space and a platform that imparts prestige. Drawing from Chinese traditional iconography, the intricately carved kui dragons grant a sense of opulence and make this piece particularly rare.

The great popularity of couch-beds (luohanchuang) in the Ming and Qing dynasty resulted from their adaptability. Used as a couch during the day and a bed at night, couch beds were found in scholar’s studios and garden pavilions, at reception halls and in women’s quarters. As Wen Zhenheng (1585-1645) notes in his Chang wu zhi [Treaties on superfluous things], “There was no way they [couches] were not convenient, whether for sitting up, lying down or reclining. In moments of pleasant relaxation, they would spread out classic or historical texts, examine works of calligraphy or painting, display ancient bronze vessels, dine or take a nap, as the furniture was suitable for all these things” (Craig Clunas, Superfluous Things. Material Culture and Social Status in Early Modern China, Honolulu, 2004, p. 42). When entertaining a guest, a small table could be placed on the couch as depicted in the Yuan dynasty (1279-1368) woodblock print Playing Double Sixes, illustrated in Sarah Handler, Austere Luminosity of Chinese Classical Furniture, Berkeley, 2001, pl. 9.7 (fig. 1). 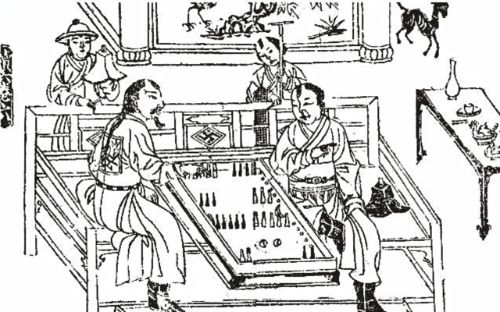 The couch bed is a uniquely Chinese furniture form, whose design developed to complement traditional Chinese architectural principles. Sarah Handler in Austere Luminosity of Chinese Classical Furniture, ibid., pp. 122-5, traces the origins of this design back to the Han dynasty (206 BC-AD 220), when low platforms with railings on one or two sides were used for important family members. These gradually became more refined and by the Northern Wei dynasty (386-534) raised platforms with three railings were used, as in the example painted on a wooden screen, recovered from the tomb of Sima Jinlong, Datong, Shanxi province, dated 484 (pl. 9.2). The design was perfected in the Ming period, when cabinet makers paid closer attention to the harmonious balance of the different elements, from the three panels to the incurved feet. An illustration of a couch-bed of similar design, titled ta (daybed), is included in the Ming dynasty encyclopedia Sancai tuhui [Assembled pictures of the three realms](fig. 2). When placed parallel to a back wall, the long rectangular form was uniquely suited to the horizontal linearity characteristic of Chinese traditional architecture, while the subtle step of the panels and their arrangement, which echo the form of thrones, heightened their presence during formal occasions. Such an arrangement was recreated at the Minneapolis Museum of Art, and illustrated in situ in Robert D. Jacobsen, Classical Chinese Furniture in the Minneapolis Museum of Art, Minneapolis, 1999, fig. 5. 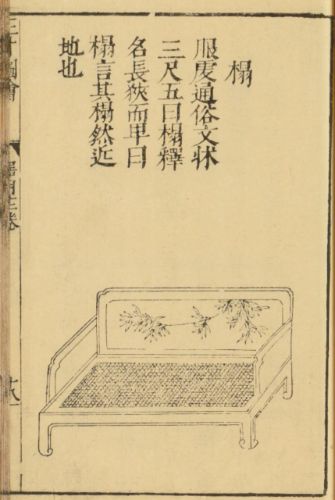 In spite of their popularity, examples of couch-beds carved entirely from huanghuali and preserved with their original panels are very rare and no other closely related example appears to have been published. Compare a huanghuali waisted luohanchuang of similar proportions but left undecorated, in the Boston Museum of Fine Arts, illustrated in Nancy Berliner, Beyond the Screen. Chinese Furniture of the 16th and 17th Centuries, Boston, 1996, pl. 14; one with pronounced incurved legs from the Kenneth A. and Helen F. Spencer Foundation, now in the Nelson-Atkins Museum of Art, Kansas City, illustrated in Laurence Sickman, ‘Simplicity and Subtlety: The Decorative Arts in China’, Apollo Magazine, March 1973, p. 270; a slightly larger one from the Ruth and Bruce Dayton collection, in the Minneapolis Institute of Art, published op.cit., pl. 22; and a further example from the collection of Dr S.Y. Yip, sold in these rooms, 7th October 2015, lot 119.

Compare also a jichimu and tieli wood example, carved on the back panel with chilong roundels, from the Ruth and Bruce Dayton collection, in the Minneapolis Institute of Art, illustrated op.cit., pl. 23; and another fashioned with a three-panelled back, carved with confronting chilong, illustrated in Wang Shixiang, Connoisseurship of Chinese Furniture. Ming and Early Qing Dynasty, Hong Kong, 1990, vol. I, pl. C7.

The exquisitely carved design of kui dragons on this bed, their tails terminating in archaistic angular scrolls, is also found on a zitan armchair (meiguiyi) attributed to the Ming dynasty, in the Palace Museum, Beijing, illustrated in The Complete Collection of Treasures in the Palace Museum. Furniture of the Ming and Qing Dynasties (I), Hong Kong, 2002, pl. 40.