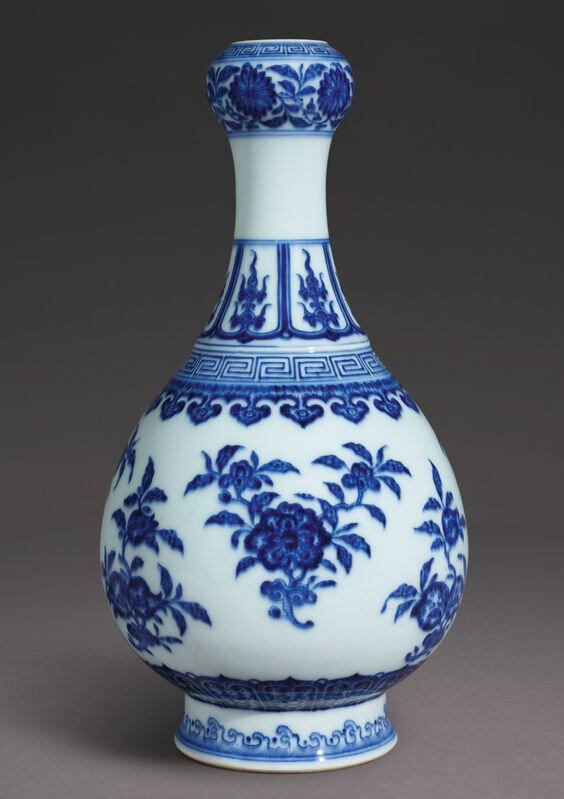 with a pear-shaped body supported on a flared foot and tapering to a tall slender neck with a garlic-head mouth and thin-lipped rim, the body painted in bright cobalt-blue tones with stipples to imitate the ‘heaped and piled’ effect, decorated with alternating flowering and fruiting branches of the sanduo arranged in two registers above borders of lappets and crested waves, the neck collared with a band of pendent lappets, each enclosing a double-trefoil motif above a gently recessed key-fret band and pendent ruyi heads, the bulbous mouth with a floral scroll below a further key-fret frieze at the rim, the base inscribed with a six-character seal mark.

Provenance: Acquired in London, circa 1967.

Note: Elegantly shaped with smoothly sloping shoulders and elongated neck, suantouping or ‘garlic-mouth’ vases are among the most interesting vessel shapes of Chinese porcelain. The form, featuring a distinctive bulbous mouth in the shape of a garlic fruit, was popular in the Ming and Qing dynasties. Generally, imperial porcelain vases during the Qing period were manufactured for decorative purposes or as flower vases. Suantouping, with their typical narrow mouth, would be suited to hold one flower or a single fruiting branch, which would match one of those depicted on the vase. Fired at the imperial kilns at Jingdezhen, this attractive design is beautifully rendered, successfully displaying the mottled ‘heaped and piled’ effect of the most desirable of early Ming period blue-and-white porcelains.

The Qianlong Emperor is known to have commissioned close copies of early Ming porcelains at the imperial kilns at Jingdezhen. Although there appears to be no exact prototype of this kind of suantouping from the early Ming period, its design of individual fruiting branches is seen on ceramic wares as early as the Yongle reign. The Yongle prototypes are painted with six or ten fruiting sprigs, varying in size and border decoration, as seen on a meiping in the Palace Museum, Beijing, illustrated in Zhongguo taoci quanji [Complete series on Chinese ceramics], Shanghai, 1999-2000, vol. 12, pl. 12. At that time, the design was mostly used on vases, although bowls, however rare, are also known, such as the bowl sold in these rooms, 7th October 2015, lot 3606.

After the Yongle period, the ‘fruiting branch’ design, celebrating auspicious wishes for longevity and prosperity, continued to be popular on imperial wares, but then mainly on bowls and less on vases. Compare, for example, a Xuande bowl of conical shape, illustrated in Regina Krahl, Chinese Ceramics from the Meiyintang Collection, London, 1994-2010, vol. 2, pl. 671. In the Qing dynasty, this design re-appears on vases.

The origin of the ‘garlic-mouth’ as a decorative element, is uncertain, but the vessel itself is modelled after an archaic bronze wine vessel named hu with a mouth distinctively formed of garlic cloves, see Jenny So, Eastern Zhou Ritual Bronzes from the Arthur M. Sackler Collections, New York, 1995, no. 52, where the hu is attributed to the late Eastern Zhou, late Warring States period, 4th-3rd century BC. The bronze hu equally features a slightly flaring ring foot, but a shorter, rounder body and a longer neck. In its shape, the suantouping of the Ming period tends to be closer to the bronze prototype than the Qing variant, which is much more elegantly shaped and better adapted to Qing court taste.

‘Garlic-mouth’ vases of this design were first produced in the Yongzheng reign, such as a vase sold in these rooms, 29th November 1978, lot 234. They continued to be popular throughout the Qing dynasty; compare a Jiaqing version in the Palace Museum, Beijing, illustrated in The Complete Collection of Treasures of the Palace Museum. Blue and White Porcelain with Underglazed Red (III), Hong Kong, 2000, pl. 145; and a Daoguang example, included in the exhibition Imperial Porcelain of Late Qing, The Chinese University of Hong Kong, Hong Kong, 1983, cat. no. 1, from the Simon Kwan collection.