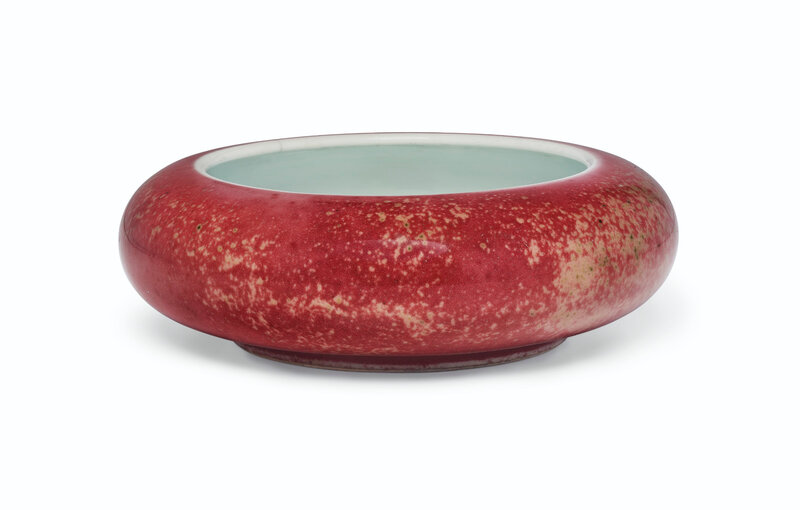 The compressed globular body is covered on the exterior with a glaze of soft rose color suffused with pale green speckles and thins to a pale pink tone on one side of the body. The interior and base are white.

Note: The present washer belongs to a group of vessels covered in a peachbloom glaze, often referred to as the ba da ma or “The Eight Great Numbers”, made for the scholar’s desk during the Kangxi period, which include washers such as the present example. A set of eight peachbloom-glazed vessels representing these shapes in The Metropolitan Museum of Art, New York, is illustrated by S. Valenstein in A Handbook of Chinese Ceramics, New York, 1989, p. 237.

This type of brush washer is described as being of ‘gong’ shape, or tangluo xi (washer of gong form), as it has a very compressed body. Other Kangxi peachbloom brush washers include one illustrated by S. Jenyns in Later Chinese Porcelain, London, 1904, pl. 7, fig. 1; by M. Beurdeley and G. Raindre, Qing Porcelain, Fribourg, 1986, pl. 98; by J. Ayers, Chinese Ceramics in the Baur Collection, vol. III, Geneva, 1972, nos. A 306 and A 309; in Sekai toji zenshu, vol. 15, Tokyo, 1983, p. 34, no. 27; and another is listed in the Illustrated Catalogue of Ming and Ch’ing Monochrome in the Percival David Foundation of Chinese Art, London, 1973, no. B 582 (not illustrated). A further Kangxi peachbloom brush washer was included in the 1978 Hong Kong Museum of Art exhibition, Ming and Ch’ing Porcelain from the Collection of the T. Y. Chao Family Foundation, no. 53.