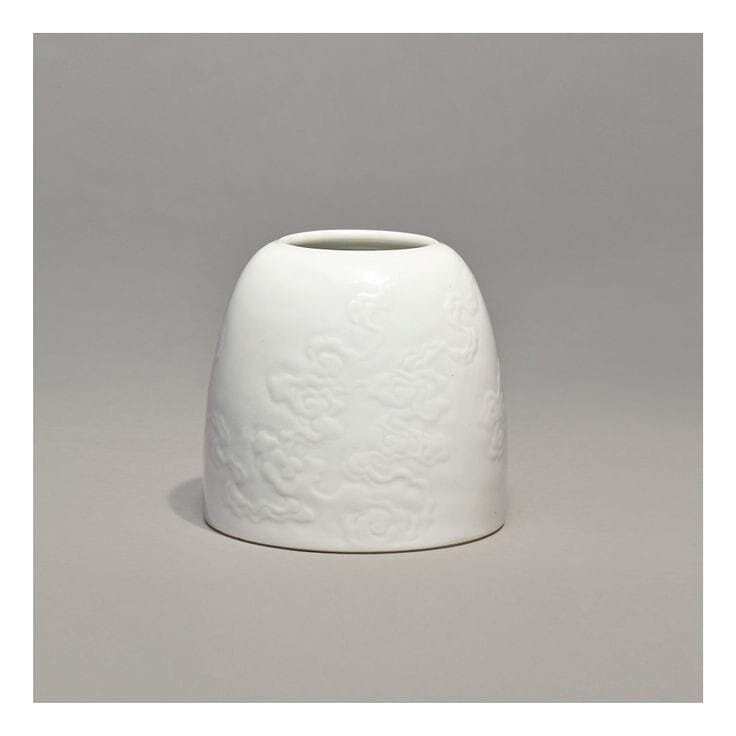 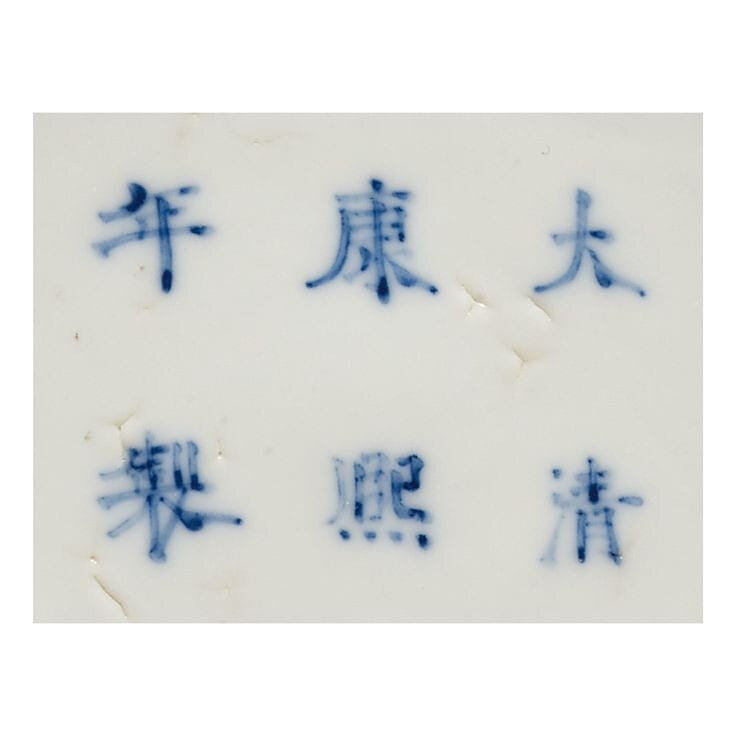 the tall domed body with gently tapering sides rising to a lipped rim and supported on a countersunk base, the exterior delicately carved with billowing ruyi-form clouds, the plumes swirling upwards to curling trails and puffy wisps, the exterior evenly applied with a lustrous, translucent milky-white glaze, the base inscribed in underglaze blue with a three-column six-character reign mark.

Note: The unassuming form of the present waterpot, which has been carved with a sophisticated design of swirling clouds, reflects the subdued elegance and refinement achieved by potters in the Kangxi period. Imperial white glazed wares were traditionally reserved for ritual vessels, and innovative scholar wares of this type mark a move away from these prescribed traditions. On the other hand, the motif of wispy clouds was well known in Jingdezhen from as early as the Yuan dynasty.

Waterpots of this type are more commonly found covered in a celadon glaze; one in the Palace Museum, Beijing, is illustrated in Kangxi, Yongzheng, Qianlong. Qing Porcelain from the Palace Museum Collection, Hong Kong, 1989, p. 147, pl. 130; another in the National Palace Museum, Taipei, is published in the Illustrated Catalogue of Ch'ing Dynasty Porcelain in the National Palace Museum. K'ang-hsi Ware and Yung-cheng Ware, Tokyo, 1980, pl. 58; one in the Victoria and Albert Museum, London, from the Gulland Bequest, is illustrated in W.B. Honey, Later Chinese Porcelain, London, 1927, pl. 7a; and a fourth example from the Sir Percival David Collection, now in the British Museum, London, is published in Margaret Medley, Illustrated Catalogue of Ming and Qing Monochrome Wares in the Percival David Foundation of Chinese Art, London, 1989, pl. 583. See also a celadon-glazed waterpot from the Diana D. Ashcroft Collection sold in our London rooms, 17th November 1999, lot 772, and twice in our Hong Kong rooms; first on 10th April 2006, lot 1607 and more recently, 5th April 2017, lot 1114. This elegant design of billowing clouds was also adapted for the doucai palette under the Yongzheng Emperor; for example, see a pair of waterpots illustrated in The Tsui Museum of Art, Hong Kong, 1991, pl. 112.