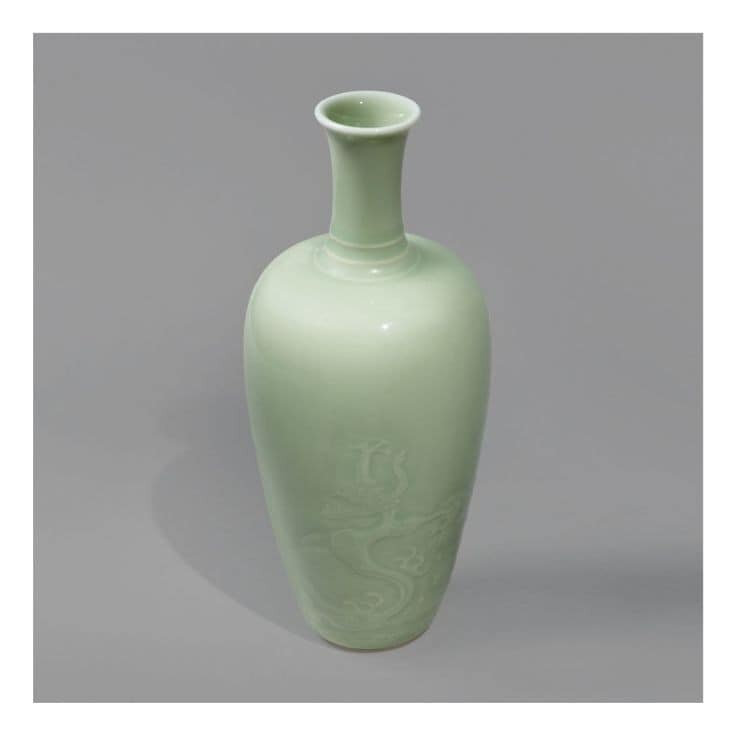 the elongated ovoid body with high rounded shoulders, sweeping to a tall, slightly waisted cylindrical neck encircled with three filets and surmounted by a gently flaring rim, the lower body finely carved with two sinuous three-clawed dragons rising from combed, rolling waves and meandering cloud wisps, the interior and exterior under a translucent pale celadon glaze pooling in the recesses to a deeper green and draining to white at the rim and filets, the recessed base glazed white and with a six-character mark in underglaze blue in three columns.

Note: Known as juban ping, 'chrysanthemum petal vase', this piece is remarkable for its pleasing, well-balanced form and delicate rose-pink glaze. The remarkable quality and variety of new forms created during the Kangxi reign at the imperial kilns in Jingdezhen could hardly be better illustrated than by the five peachbloom vessels in this sale, lots 102, 103, 113, 115 and the present vase. Their fine potting and striking mottled glazes display the technological and artistic advances made at Jingdezhen in this period.

The form of this vase is a variation of the ‘three-string vase’ (sanxuanzun), which comprises one of the eight prescribed peachbloom vessels. Vases of this form and design are likely to have been produced when the artist Liu Yuan (c. 1638-c. 1685) was designing for the imperial kilns. In his research on Qing imperial porcelain, Peter Y.K. Lam has highlighted the importance of this artist for porcelain decoration of the Kangxi period, and has shown that the image of a dragon emerging from clouds or waves, as seen on the present vase, was a distinctive Liu Yuan design. Furthermore, Lam has convincingly argued that the various wares with peachbloom glazes were created during this period early in the Kangxi reign. One of the few distinctive shapes produced with a peachbloom glaze is this sanxianping (‘three-string’) or laifuping (‘radish’) vase form, which was an innovation of the time.

Closely related examples include two vases in the Palace Museum, Beijing, illustrated in Gugong Bowuyuan cang Qingdai yuyao ciqi [Qing porcelains from the Imperial kilns preserved in the Palace Museum], Beijing, 2005, vol. I, book 1, pls 112 and 113; one in the Walters Art Museum, Baltimore, published in S.W. Bushell, Oriental Ceramic Art Illustrated by Examples from the Collection of W.T. Walters, London, [1896] 1981, col. pl. VII; another, from the Tsui Museum of Art, Hong Kong, sold at Christie’s Hong Kong, 3rd November 1996, lot 566; and a fifth example sold in these rooms, 16th-17th September 2014, lot 156. See also a vase of this type, from the Widener Collection in the National Gallery of Art, Washington D.C., illustrated in Virginia Bower, The Collections of the National Gallery of Art. Systematic Catalogue: Decorative Arts, pt. II, Washington D.C., 1998, p. 102 (center), where it is noted that the ‘slight differences in the modeling of the appliqued dragons suggest that the dragons were individually sculpted and not molded’ (p. 103).

See also a similar vase, from the collection of Mrs. William H. Moore in the Yale University Art Gallery, New Haven, included in the exhibition The Communion of Scholars. Chinese Art at Yale, China House Gallery, China Institute in America, New York, 1982, cat. no. 35; one (mistakenly identified as having a ‘clair-de-lune’ glaze) illustrated in René-Yvon Lefebvre d’Argencé, Chinese Ceramics in the Avery Brundage Collection, San Francisco, 1967, pl. LXIV C; and another sold in our Hong Kong rooms 23rd October 2005, lot 368, and again at Christie’s Hong Kong, 29th May 2009, lot 1819.

Vases of this type were also produced with the dragon depicted in copper red on a white ground leaping from carved waves; see one in the Metropolitan Museum of Art, New York, from the collection of Mary Clark Thompson, illustrated in Oriental Ceramics. The World’s Great Collections, vol. 11, Tokyo, 1982, pl. 118, together with a Yongzheng version of this design, where the waves and scrolling clouds are not carved but also painted in copper red, col. pl. 30, from the Friedsam Collection.

For peachbloom-glazed Kangxi mark and period vases of this type, see an example in the Palace Museum, Beijing, published in Kangxi. Yongzheng. Qianlong. Qing Porcelain from the Palace Museum Collection, Hong Kong, 1989, p. 137, pl. 120; and another, from the Meiyintang Collection, illustrated as part of a complete group of eight peachbloom wares for the scholar’s desk, in Regina Krahl, Chinese Ceramics from the Meiyintang Collection, London, 1994-2010, vol. 4, p. 328.