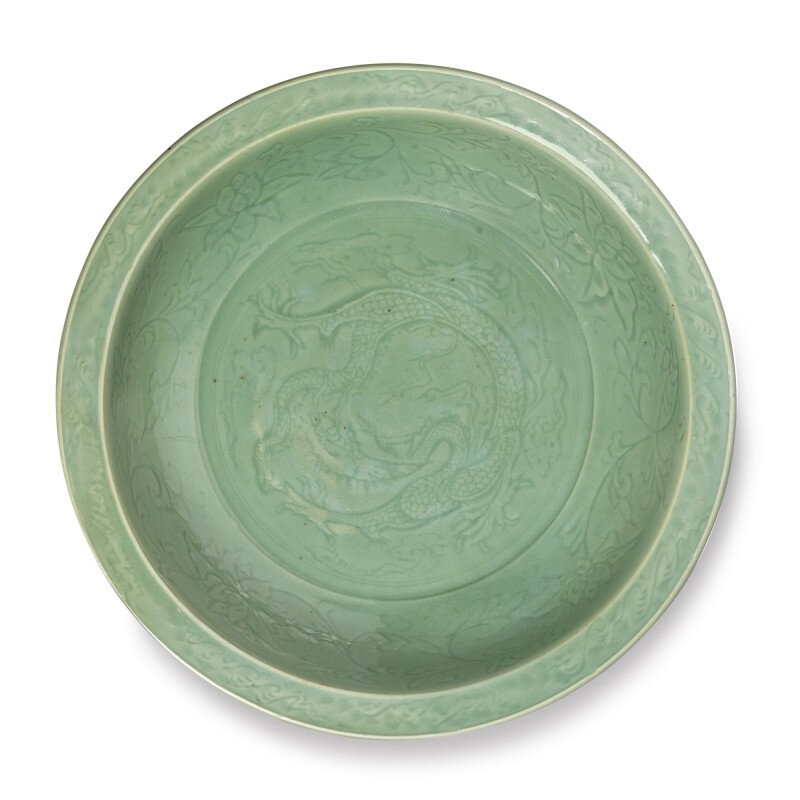 stoutly potted, with deep rounded sides rising to an everted rim, the interior deftly incised with an arching dragon amid fiery clouds, the cavetto with a frieze of scrolling lotus blooms, and a band of cresting waves encircling the rim, the underside undecorated, applied overall with a rich sea-green glaze save for a dark orange firing ring at the base.

Note: Notable for its vigorous depiction of a five-clawed dragon among clouds, this piece belongs to a group of large dishes made at the Longquan kilns from the late 14th century when some kilns were under the supervision of the Ming court. In this period, the preference was for large-sized display vessels, either carved or molded with bold designs that could also be found on contemporary blue and white porcelain. The rendering of the dragon’s coiled body, and the use of the cavetto and rim for framing the central design on this dish evidence this trend.

Dishes of this size and form and incised with dragons are unusual, although a closely related example from the Xinyangtang Collection, was sold in our Hong Kong rooms, 29th-30th November 2018, lot 601. See also three reconstructed saucer-shaped dishes carved with this motif, recovered from the Fengdongyuan kiln, Dayao, Longquan, included in the exhibition Longquan Ware: Chinese Celadon Beloved of the Japanese, Aichi Prefectural Ceramic Museum, Nagoya, 2012, cat. nos 139-141; and another from the Sir Percival David Collection, now in the British Museum, London, included in Margaret Medley, Illustrated Catalogue of Celadon Wares in the Percival David Foundation of Chinese Art, London, 1997, no. 259.