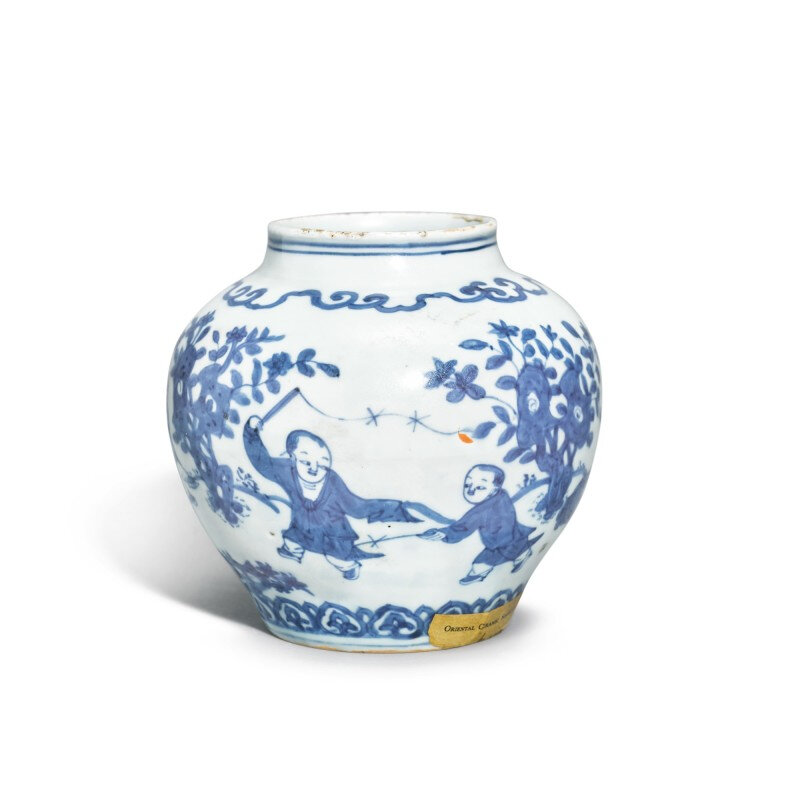 the compressed baluster body painted with a continuous scene of boys at play within a landscape of pierced rockwork and plants, the boys arranged in pairs and engaged in various games, all above a band of ruyi encircling the foot, with a cloud scroll at the shoulder below double-line borders at the neck, the base inscribed with the reign mark arranged in a circle.

Note: The imagery of children at play was a favored theme during the Southern Song period, and was popularized by the Southern Song court artist, Su Hanchen (active early 12th century). Characterized by shaven heads, round faces and wide eyes, this style of depicting children was carried into the Ming period, as seen on the present jar. The 'Hundred Boys' or 'children at play' theme is symbolic of the Confucian ideal for the education and advancement of many sons. As a devout Daoist, the subject-matter would undoubtedly have appealed to the Jiajing Emperor, who is recorded in the Ming Shi (Ming History) to have commissioned a Daoist rite to take place in the Imperial Garden in the eleventh year of his reign (1532) for the intended purpose of praying for the birth of imperial sons.

Only a very small number of similar jars are known. One, formerly in the R.H.R. Palmer Collection was sold at Christie's Hong Kong, 30th November 1983, lot 82; another, with a reduced neck, from the J. Hellner Collection is illustrated in L. Reidemeister, Ming-Porzellane in Schwedischen Sammlungen, Berlin, 1935, pl. 14b, and sold in our Hong Kong rooms, 28th November 1987, lot 75.