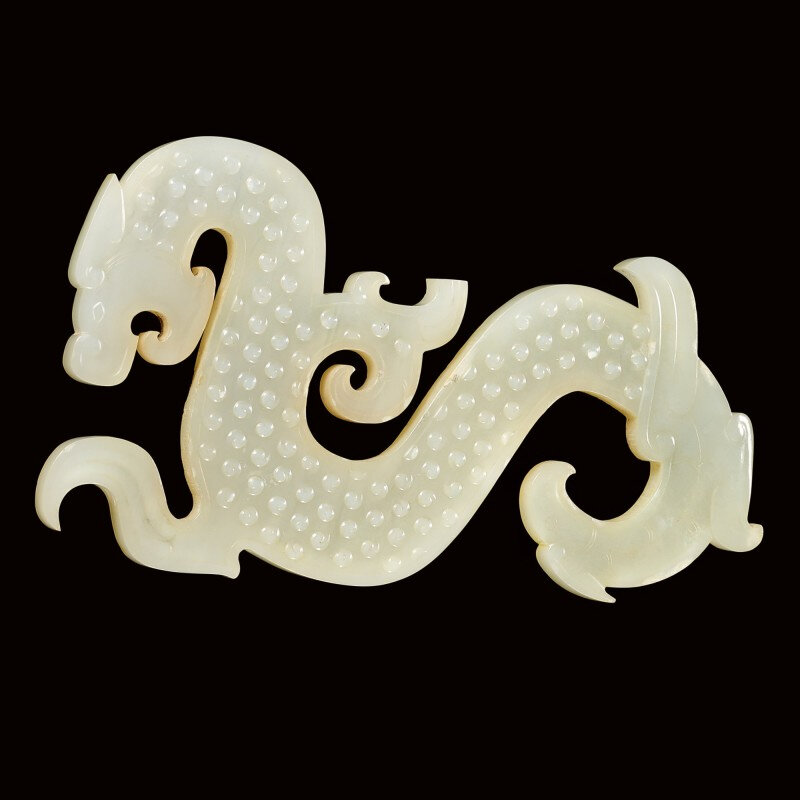 well worked from a translucent white stone, the thick S-shaped pendant skilfully rendered to depict a sinuous dragon with its coiled body detailed with spiral bosses and terminating in a phoenix head.

Note: Exquisitely carved as an S-shape dragon terminating in a phoenix head, the present piece is notable for its powerful sinuous form and outstanding material. Dragon-shaped jades made a sudden appearance among the range of jades used in pendant sets in the 5th century BC. By the 4th century BC, dragon pendants of this type were popular and often made as the bottommost components in the configuration of ritual ornaments of the nobility (Jenny F. So, Early Chinese Jades in the Harvard Art Museums, Cambridge, 2019, pp. 210-213).

Despite its popularity, dragon pendants of comparable quality, however, are extremely rare. Compare three related examples, each of an S-shaped silhouette comprising of a dragon and a bird on each end, preserved in the Harvard Art Museums and illustrated in Jenny F. So, op.cit., cat. nos 25A-25C. See also a reticulated jade pendant, carved as a sinuous dragon with an upturned snout and further decorated with three phoenix heads, excavated from a Chu tomb in Jiuliandun, Zaoyang, Hubei, included in the exhibition Phoenix Reborn: Zeng and Chu Jades Excavated from Hubei, Art Museum, The Chinese University of Hong Kong, Hong Kong, 2018, cat. no. 59.