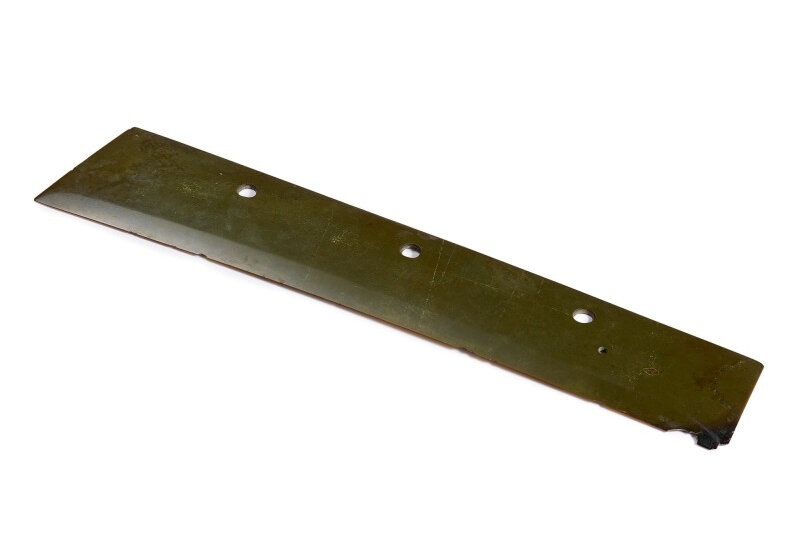 impressively worked from a dark olive-green stone with natural brown and white inclusions, the long blade skilfully rendered with a crisp thinness, the straight upper horizontal edge joined by the two slightly splayed short ends, the cutting edge very gently curved and marked with a subtle bevelled edge on each side, the blade drilled with three apertures along the upper edge with a smaller one toward one end and lower down.

Provenance: Acquired in Japan prior to 1995.

Note: Ceremonial blades carved from jade form an important object category among jade-working Neolithic cultures. The present simple and plain blade with its carefully bevelled cutting edge is carved from a dark olive-green jade. The edge is ground to a mere 0.1 cm while the thickest point of the blade measures only 0.3 cm.

Similar jade ceremonial blades with subtle differences in characteristics have been discovered from various Neolithic period sites. See a Longshan example with a slightly curved cutting edge (l. 54.6 cm, 0.4 cm in thickness) published in The Complete Collection of Jades Unearthed in China, vol. 14:Shaanxi, op.cit., pl. 8; another (l. 51 cm, 0.3 in thickness) in ibid., vol. 4: Shandong, pl. 24; and a blade attributed to the Shenmu culture in the collection of the Harvard Art Museums (l. 44.6 cm, 0.1-0.2 cm in thickness), included in Jenny F. So, Early Chinese Jades in the Harvard Art Museums, New Haven, 2019, cat. 6B, together with another slightly thicker example attributed to the Qijia culture, cat. 6C.

Large blades with similar perforation configuration, but often slightly thicker, were excavated from Qijia culture sites. A larger green jade blade (l. 65.5 cm), a smaller example (l. 41.2 cm, 0.8 cm in thickness), and a fragment (l. 18.7 cm, 0.5 cm in thickness), all drilled with a row of larger holes and an additional smaller perforation that does not conform to the linear arrangement, but centred on the blade at the butt, are published in The Complete Collection of Jades Unearthed in China, vol. 15: Gansu, Qinghai, Ningxia, Xinjiang, Beijing, 2005, pls 39 and 148, together with a related fragment, pl. 151. A slightly shorter olive green and brown jade blade (l. 45 cm), together with a much shorter example (l. 28.9 cm), systematically drilled with three holes and a fourth one close to the short side, are illustrated in Jessica Rawson, Chinese Jade from the Neolithic to the Qing, London, 1995, pls 10.17-18.