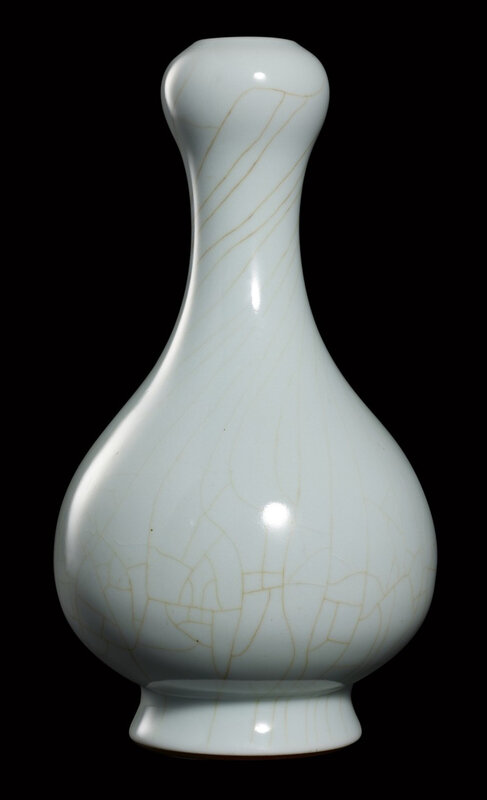 of elegantly potted with a pear-shaped body supported on a spreading foot rising to a waisted neck surmounted by a garlic-head mouth, covered overall in a soft bluish-grey glaze suffused with widely dispersed crackles, the footring applied with dark brown dressing, inscribed to the base with a six-character seal mark.

Note: It is extremely rare to find a Qianlong reign-marked vase of this elegant garlic-mouth form with a Guan-type glaze. Skilfully shaped with gentle curves that swell to the body and mouth, the form of this vase was inspired by celebrated Song vessels that were the object of the Qianlong Emperor’s admiration and study. Even the foot is stained in a dark brown colour to emulate that of its prototype. The beauty of the form is accentuated by the subtle bluish-grey glaze suffused with fine streaks of golden-brown crackles.

A Qianlong reign-marked Ru-type vase of this form from the Qing court collection and still in Beijing is illustrated in The Complete Collection of Treasures of the Palace Museum. Monochrome Porcelain, Hong Kong, 1999, pl. 215; a larger example is published in Sekai tōji zenshū/ Collection of World Ceramics, vol. 12, Tokyo, 1956, pl. 93, together with one covered in a teadust glaze, p. 183, fig. 52; and a third was sold in these rooms, 8th October 2008, lot 2512. Compare also a Ge-type glazed vase with a Yongzheng seal mark and of the period, included in the International Exhibition of Chinese Art, Royal Academy of Arts, London, 1935, cat. no. 2589.

For the Song prototype, compare a Longquan celadon vase in the National Palace Museum, Taipei, illustrated in Lung Ch’uan Ware of the Sung Dynasty, Taipei, 1962, pl. 10; and examples recovered from a sunken ship off the coast of Korea in the first half of the 14th century, included in the Special Exhibition of Cultural Relics Found Off Sinan Coast, National Museum of Korea, Seoul, 1977, cat. nos 53 and 54