the interior centred with the Wheel of the Law supported on a lotus bloom issuing further scrolls encircling the emblems, the cavetto with the remaining seven emblems, each resting on a lotus bloom borne on a continuous scroll, the exterior painted with a frieze of the eight emblems above a floral frieze around the foot, the base with a six-character reign mark within a double circle.

Note: Chenghua porcelains, considered among the most idiosyncratic and distinct creations of the imperial kilns at Jingdezhen, are perhaps the most highly sought after of all Chinese imperial porcelains. Their porcelain body and glaze are arguably the finest that have ever been created, imbuing each piece with an outstanding tactile quality, while their unobtrusive yet sophisticated designs are executed in a captivating, complex and yet free and easy painting manner. The present dish is a particularly rare and unusual example of Chenghua ware. There are only three other similar dishes in public museums that appear to have been published. An almost identical dish from the collection of Sir Percival David is now in the British Museum, London, no. PDF,B.627, published in Stacey Pierson, Illustrated Catalogue of Underglaze Blue and Copper Red Decorated Porcelains in the Percival David Foundation of Chinese Art, London, 2004, p. 82, no. B627. Another example is preserved in the Shanghai Museum, illustrated in Lu Minghua, Shanghai Bowuguan zangpin yanjiu daxi / Studies of the Shanghai Museum Collections: A Series of Monographs. Mingdai guanyao ciqi [Ming imperial porcelain], Shanghai, 2007, pl. 4-20. The third example, from the Eugene Fuller Memorial Collection, is in the Seattle Art Museum, no. 51.85. 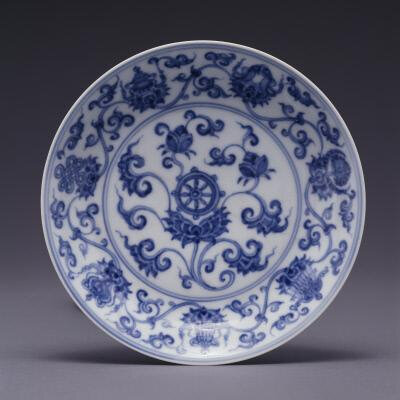 The Chenghua bajixiang dish is also known in another version; similarly decorated on the interior with seven Buddhist Emblems circling the Wheel of Law in the centre, but the exterior painted with lotus sprays instead. Compare a dish in the National Palace Museum, Taipei, illustrated in Catalogue of the Special Exhibition of Ch'eng-Hua Porcelain Ware, Taipei, 2003, cat. no. 24; and another inscribed with a reign mark enclosed within a double square, excavated from the Ming imperial kiln sites at Jingdezhen and exhibited in Imperial Porcelain: Recent Discoveries of Jingdezhen Ware, Museum of Oriental Ceramics, Osaka, 1995, cat. no. 120.

The motif and the painting style of the present dish closely follow that of the Xuande reign. During the Chenghua period, Xuande blue and white porcelain were considered to be the finest ever produced and thus served as inspiration. Compare a Xuande blue and white jar similarly painted with a continuous lotus scroll, each of the blooms supporting a Buddhist Emblem, in the collection of the Palace Museum, Beijing, illustrated in Geng Baochang, ed., Gugong Bowuyuan cang Ming chu qinghua ci [Early Ming blue and white porcelain in the Palace Museum], Beijing, 2002, vol. 2, pl. 107; and also a bowl and cover, formerly in the collections of Edward T. Chow and T.Y. Chao, sold in these rooms, 3rd October 2017, lot 3301.