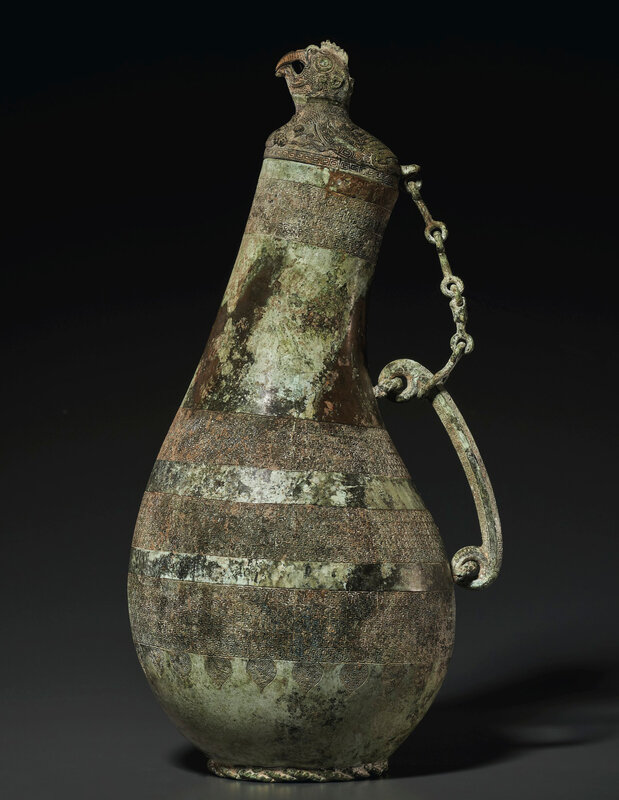 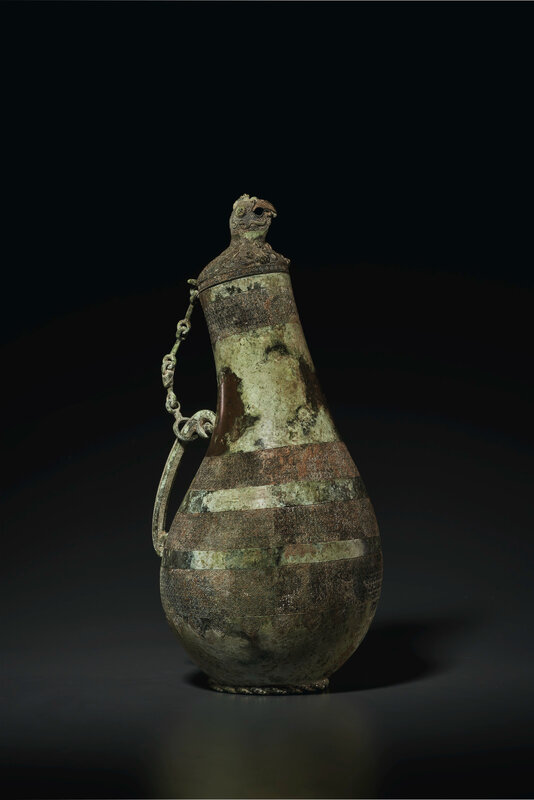 The vessel is raised on a ring foot cast in imitation of twisted rope, and has a globular lower body that tapers to a cylindrical neck angled to one side. The body and neck are cast with four bands of dense interlocking scroll pattern, and one side is set with an ear-shaped handle connected by a link chain to the cover cast as a bird with raised head and hinged beak above the feet which grasp serpents.

Note: According to Jenny So in Eastern Zhou Ritual Bronzes from the Arthur M. Sackler Collections, vol. III, The Arthur M. Sackler Foundation, Washington, D.C., 1995, p. 237, hu of this type were made from the end of the eighth century BC and disappeared by the early fifth century BC. So discusses the evolution of the shape during that period and illustrates a number of hu to document the changes, pp. 238-241, figs. 39.1 to 39.6. One of these, fig. 39.5, from Shanxi Taiyuan Jinshengcun M251, which is dated late 6th-early 5th century BC, is most similar to the present vessel. Like the present hu, there are bands of dense scroll decoration around the body and a bird with hinged beak forms the cover. The handle, however, is in the shape of the arched body of a mythical beast. The author also notes, p. 237, a similar hu in the Seligman collection, illustrated by William Watson in Ancient Chinese Bronzes, London, 1962, pl. 77a. Like the present vessel, the Seligman hu has a ring foot patterned to imitate rope twist, and has similar bands of flat-cast decoration, but only three instead of four. The cover is also in the shape of a seated bird with hinged beak. Another very similar hu in the Meiyintang Collection is illustrated by Christian Deydier in Chinese Bronzes from the Meiyintang Collection, vol. 1, Hong Kong, 2013, pp. 70-71, pl. 40, which is dated circa 6th century BC. Unlike the beak of the bird on the present hu, the beak of the bird on the Meiyintang vessel is not hinged. See, also, the similar hu in the Musée Cernuschi, Paris, illustrated by Christian Deydier, Les Bronzes Chinois, Paris, 1980, p. 230, pl. 94, which is similarly dated 6th century BC.