NEW YORK, NY.- Sotheby’s will offer the collection of prominent New York collector, interior designer, and philanthropist Hester Diamond in a dedicated single-owner sale in New York in January 2021, as part of Sotheby's annual Masters Week auctions. The selection of works on offer – spanning Old Master paintings and sculpture, contemporary art, 20th century furniture and design, exotic minerals, and more – is a reflection of Diamond's vision as an innovative and inquisitive collector, curating her collection of Old Masters amidst vibrant and eclectic modern and contemporary pieces in a signature visual style that defined her independent spirit.

George Wachter, Chairman of Sotheby’s America and Co-Chairman of Sotheby’s Old Master Paintings Worldwide, commented: “Dynamic, independent, and incomparable, Hester Diamond was a fearless and visionary collector. Whether through the expressive qualities of the paintings and sculpture in her home, the electric colors of her furniture, or in the mesmerizing patterns of the textiles she chose, each piece in her collection personifies Hester’s distinct vision and the freedom that came with being true to herself. The ability to pursue her passions with such conviction and clarity not only propelled Hester to build an extraordinary career as a venerated interior designer, but, in a remarkable feat, to assemble important collections of both Modernist works and Old Master paintings and sculpture from the ground up. While others were intimidated by change, Hester embraced it with a fervor, never hesitating to start anew – she instinctively knew how to challenge the status quo with a fresh perspective, both in her art collection and in life.”

FEARLESS: THE COLLECTION OF HESTER DIAMOND
Auction January 2021
The Hester Diamond collection features an unparalleled selection of Old Master paintings and sculpture, highlighted by wonderful examples of early Italian Renaissance painting, early Netherlandish painting, and a remarkable array of terracotta, marble and wood European sculpture from masters such as Lorenzo Ghiberti, Benedetto da Maiano, Girolamo della Robbia and Leonhard Kern. Spanning the early 14th century through the 18th century, the Old Master works in the collection are characterized by their eclecticism, which attests to Hester’s unique eye, seeking only the highest level of quality and a fearless pursuit of her interests. Drawn especially to bright, bold colors which can be rare in the Renaissance era, Hester acquired extraordinary works by important artists across a spectrum of genres, styles, and geographies. With Old Masters as the core of the collection, Diamond also collected significant pieces of contemporary art, as well as minerology. Displayed together, the collection was entirely unique to her personality, and represented her unwavering, singular spirit.

Leading the collection is an exceedingly rare sculpture by Gian Lorenzo Bernini and his father Pietro titled Autumn (below, estimate $8/12 million), one of only a handful of sculptures by Bernini and his father that remain in private hands. Few artists have changed art history as significantly as Gian Lorenzo, who is remembered as the greatest sculptor since Michelangelo, and whose artistic achievements gave life to the new figurative language of the Baroque, which dominated all of Europe for nearly two centuries. Carved in 1616 when Gian Lorenzo was only 18, the exceptional and powerful Autumn, symbolizing abundance and rebirth in the guise of an unbridled man of the woods reaching for a piece of fruit, is an indisputable masterpiece by Bernini in which Gian Lorenzo’s involvement can be identified. The present work represents the young Bernini's bravura and the moment when Gian Lorenzo began to eclipse his father in skill and conception. The young Bernini was still working in his father's studio at the time Autumn was made for Prince Leone Strozzi, one of the Berninis’ first major patrons in Rome. Bernini's work very rarely comes up for auction, with the last piece, a terracotta bozzetto or sketch, titled Il Moro, selling in 2002 at Sotheby's London for $3.2 million, the current auction record for the artist. In addition to the Bernini, the Diamond collection features a deeply curated selection of rare and important Old Master sculpture. Among them is Jörg Lederer's polychrome limewood figure of St. Sebastian (estimate $600,000/1 million), a favorite subject in early wood sculpture. Depicting Saint Sebastian partially naked in a contorted pose, Lederer displays the brilliance and inventiveness of his craft in this exceptional and dynamic polychrome wood figure. Lederer’s design and skill with the chisel place him beside the great masters of German gothic wood sculpture. Many of his workshop’s altarpieces have been lost and the present sculpture appears to be the only surviving full figure of the saint attributable to the sculptor. It is a remarkable and rare discovery, with the artist's work infrequently appearing at auction. 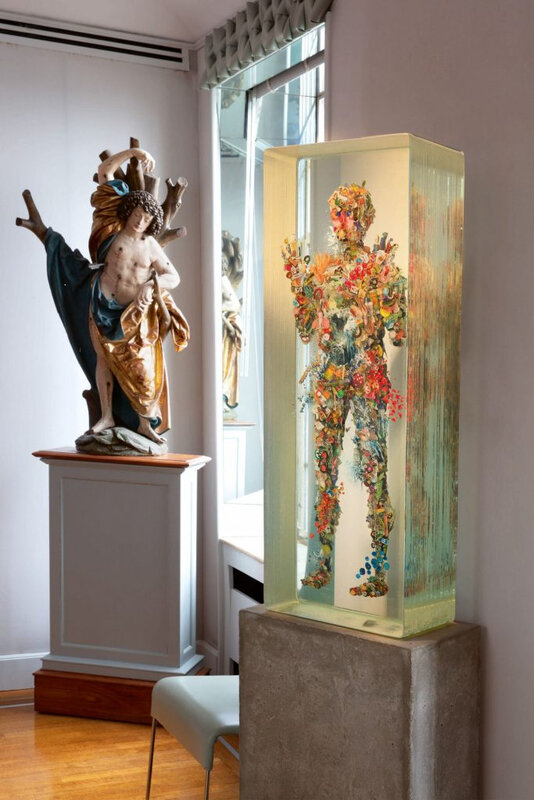 Girolamo Della Robbia’s Madonna and Child (estimate $300/500,000), circa 1510, is a quintessential work of the Florentine Renaissance. The glazed terracotta sculpture is a beautifully modeled variant of the traditional Marian theme which appeared in various media during the Florentine Renaissance. The copious garland of fruit, vegetables, and flowers is modeled with pronounced naturalism and spiritedness and it surrounds an image of domestic intimacy and great devotional power. The pure white glaze illuminates the figures’ innocence and purity further underscoring the potency of this image. Della Robbia’s works were popular among Florentine patrons as decorations for their homes, and were usually acquired to mark significant family events such as marriages and births.

The collection also features a significant group of paintings, including a pair of magnificent canvases by Dosso Dossi, one of the most innovative and idiosyncratic artists of the Italian High Renaissance. This pair of canvases, The Sicilian Games and The Plague at Pergamea (estimate $3/5 million), are sections of the artist’s ten-piece frieze of scenes from the Aeneid commissioned by Alfonso d’Este (1476 – 1534), the Duke of Ferrara, for the decoration of his private study. Determined for the interior to reflect not only his personal passions, but his intellect and cultural imminence, the Duke acquired a superlative series of paintings from Italy’s most preeminent artists, including Giovanni Bellini’s Feast of the Gods (now in the National Gallery, Washington); Titian’s Bacchus and Ariadne (National Gallery, London), the Bacchanal of the Andrians and the Worship of Venus (Museo Nacional del Prado, Madrid). Above these large canvases hung Dosso’s exquisite frieze, its subject inspired by Virgil’s epic poem, the Aeneid. The specificity and detail with which Dosso describes Virgil’s epic poem through these surviving canvases show that Dosso did not simply synopsize the journeys of Aeneas, but chose instead to select specific episodes from the text that reflected the aspirations and favored pursuits of his esteemed patron – scenes of games, hunting and leisure. Giovanni di Niccolò de Lutero, called Dosso Dossi, The Sicilian Games (top) and The Plague at Pergamea, from a frieze of 10 paintings based on episodes from The Aeneid. The frieze, from the collection of Hester Diamond. Estimate $3,000,000–5,000,000. Photo courtesy of Sotheby’s.

The collection is further highlighted by an impressive triptych of The Nativity, The Adoration of The Magi, The Presentation in The Temple by Pieter Coecke van Aelst (below, estimate $2.5/3.5 million), one of the most important artists of the Northern Renaissance. This very early work, executed circa 1520-25, and fully intact in its original frame, is not only remarkable for its size, and excellent condition, but for the originality of Coecke’s iconography and use of color; the overall composition and fine details in the fabric patterns, still life elements, and landscape completely encapsulates painting in the Northern Renaissance. Following its re-attribution to the artist, the present work was the centerpiece of The Metropolitan Museum of Art’s exhibition, Grand Design: Pieter Coecke van Aelst and Renaissance Tapestry in 2014. Filippino Lippi’s Penitent Mary Magdalene Adoring the True Cross in a Rocky Landscape (estimate $2/3 million), is a hauntingly beautiful private devotional work datable to the late 1470s, a period in which the artist was adhering to the style of his second teacher, Sandro Botticelli. A cult devotional figure in 14th-century Florence, Lippi emphasizes the ascetic life of the penitent Mary Magdalene, by showing her emaciated figure as all bones and sallow skin, and her hair has grown so uncontrollably that it doubles as a garment. The extreme devotion of the saint evokes an emotional response in the viewer, much like Donatello’s sculpted version of the Magdalene for the Baptistery in Florence (circa 1453-55), which was indeed a source of inspiration for Lippi, as were Florentine sculptures throughout his career. Several significant works of contemporary art showcase the diversity and range of the Diamond collection. Bill Viola's Ablutions (estimate $70/100,000), a video diptych mounted on two plasma displays installed prominently in Hester's dining room behind the head of the table, plays a loop of two people washing their hands. Barry X Ball's Envy (estimate $80/120,000) is more closely associated with the Old Master sculpture in the Diamond collection, as the work is modeled after a 17th century sculpture by Giusto Le Court, a sculptor who is represented in the Diamond collection by a terracotta sketch model circa 1690 of St. James the Less, located in Ca' Rezzonico in Venice. Large-scale three-dimensional works by Dustin Yellin and Xu Zhen further round out the contemporary offerings.

Further to her independent design sense, Hester Diamond was known for her wide-ranging and comprehensive collection of exotic minerals, metals, and gemstones, which were prominently displayed throughout her home and will be offered as part of the collection. The vibrant colorscape of the minerals perfectly complemented the modern furnishings of the home and her eclectic style. Displayed from the perspective of an art installation rather than a cabinet of specimens, the collection is an excellent cross section of mineral collecting over the last 30 years. Highlights from the group include an impressive Smoky Quartz and Amazonite (estimate $20/30,000), an extremely delicate Amethyst “Rose’ (estimate $1/2,000), and a massive Naturally Etched Aquamarine (estimate $20/30,000). Born in the Bronx, Hester appreciated art from a young age, visiting New York’s museums nearly every afternoon following her classes at Hunter College. After first working as a social worker in the early 1950s and wanting to pursue a career in the arts, Hester took a position at Stair and Company, a leading antiques gallery on 57th Street in New York. Through her work at Stair, she and her first husband, Harold Diamond, would become friends with Martha Jackson, the owner of an important gallery of cutting-edge contemporary art also on 57th Street, and would soon become immersed in the art world. Not long after, Hester and Harold approached British artist Barbara Hepworth, whose work she admired but whom she had never met, offering to represent her in the United States. To their surprise, Hepworth accepted, and from there on, friendships with artists and collectors ensued, and the Diamonds began their career as prominent art dealers.

As one of the preeminent tastemakers of her generation, Hester would go on to establish a thriving interior design business, recognizing a market for her refined and eclectic sense of style. But, it was after the death of Harold in 1982 that Hester began to seriously collect Old Master paintings and sculpture, selling much of her modern collection, including works by Picasso, Matisse, and Kandinsky, at Sotheby’s in 2004, in an effort to seek out new collecting opportunities and build a collection with a new identity.

Hester's interest in Old Masters would blossom with her second husband, Ralph Kaminsky, and with this new aesthetic focus, Hester's characteristic design sensibility would inform her approach to organizing and displaying her new collection. She replaced the 18th and 19th century furniture in her home with modern and contemporary pieces featuring vibrant colors, angular shapes, and hard edges, to create a dynamic contrast between in the home. She also acquired several significant pieces of contemporary art to further highlight the contrasting aesthetic.

Her deep passion for Old Masters and commitment to philanthropy led her to co-found The Medici Archive Project, an organization that supports archival research for scholars and students of Renaissance and Baroque art, and Vistas (Virtual Images of Sculpture in Time and Space), a non-for-profit publishing project focused on new scholarship for Old Master Sculpture.