VIENNA.- From Bicci di Lorenzo to Eugen von Blaas, from Chaim Soutine to Lucio Fontana — November at Dorotheum offers art lovers and collectors a vast range of genres from the Middle Ages to the present day. Works of art, Old Masters and 19th century paintings will be the first items to be presented during Classic Week (5-10 November 2020). The end of the month, from 24 to 30 November 2020, will be dedicated to Contemporary Week comprising modern and contemporary art. Rounding off this stellar auction week are jewels and wristwatches.

A rich dowry
The Florentine Renaissance will be highlighted in the Old Master Paintings sale on 10th November, including the front of a wedding chest, an exquisitely painted and decorated panel which once made up part of a marriage chest, known in Italian as a cassone. These chests were often included in a bridal dowry between the 14th and 16th centuries and were decorated according to the standing and sophistication of the respective families. The panel for sale at Dorotheum is decorated with scenes from the popular tale of Trajan and the Widow, derived from the Golden Legend. It shows the great Emperor Trajan ordering the marriage of his own son, the killer of an innocent man, to the bereaved and widowed mother of the victim, as compensation to her for loss she has suffered. The painted panel also depicts the next episode in their tale, depicting a traditional nuptial cortege, with the couple accompanied by followers bearing the rich gifts bestowed on them by the Emperor, fittingly enough, including a cassone. The refined rendering of the figures and the architectural settings, along the pastiglia ornament on this panel suggests that it was produced in Florence around 1450. From the 19th to the mid-20th century, the panel painting was part of the celebrated collection of early Renaissance paintings of the Earls of Ashburnham (€ 180,000 – 220,000).

Dorotheum’s auction also includes highlights such as a scene from the life of St Nicholas entitled “The miracle of a child restored to his parents”, which was once part of an altarpiece from the church of San Niccolò in Florence, painted by Bicci di Lorenzo, and dated to around 1433, (€ 150,000 - 200,000) another part of the same altarpiece is in the Metropolitan Museum of Art, New York. Also offered for sale is an arresting portrait of an unknown gentleman with a dog, executed by the Mannerist painter, Bernardino Campi (€ 150,000 – 200,000). “The father of art history”, the hugely influential historian and writer of the earliest biographies of the artists, Giorgio Vasari, was himself also a painter. Two of his allegorical paintings, which were originally part of a ceiling decoration, showing intertwined putti representing Summer and Winter are also included in this sale. (€ 150,000 – 200,000 each).

A great female artist
Two works by the important Bolognese painter, Lavinia Fontana are further highlights of this sale; an innovative rendering of her acclaimed depiction of the “Madonna del Silenzio: The Virgin watching over the Sleeping Child”, and the other, a Portrait of a Youth, showing a confident young man, possibly an aspirant mathematician posing by a table, under characteristic green drapery, the somewhat formal subject being interrupted by the appearance of a cheeky dog from beneath the table. (each € 150,000 – 200,000). 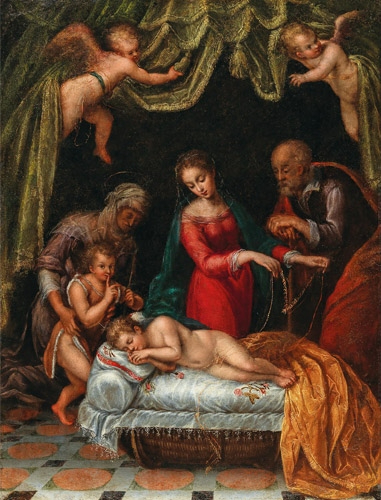 Climate change in the 16th century
“Winter Landscape with Ice Skaters” influenced by the work of Pieter Brueghel the Elder and painted by the Dutch artist, Abel Grimmer (1570 - after 1620), this picture was executed during the “little ice age” which occurred in Europe at the end of the 16th and beginning of the 17th centuries, during which the temperature dropped by two degrees with disastrous consequences. Paintings such as this were in great demand among the wealthy Dutch bourgeoisie, showing the playful diversions of ordinary people, while also encapsulating the privation and misery of the age. The Dutch moral associated with this subject is no less topical today: “The slipperiness of human life” (€ 300,000 – 500,000). Worldly pleasures
Riddle me this: “The world feeds many fools” is cryptically inscribed above the comical personages of two fools in a painting by the Dutch School (€ 120,000 – 180,000). With Jan Steen, in turn, life becomes very secular in the household of Martha and Maria. Christ is depicted in an innovative perspectival “everyday” scene (€ 200,000-300,000). An elegant party
A highlight at the auction of 19th century paintings on 9 November is the portrait commissioned by Italian industrialist Andrea Antonini of his daughter Maria Lebreton (presumed to have served as a wedding present). The father of the bride, who by 1920 would achieve world fame with a hemp spinning mill, the Canapificio Veneto Antonini & Ceresa, found in Eugen von Blaas the best of his guild. Veneto’s upper middle classes treasured the elegant and sublime portrait painting of the artist. The portrait, which shows Mrs. Lebreton in full size, dressed hat to foot in noble black, was exhibited at the Venice Biennale one year after its creation, in 1909 (€ 150,000 – 200,000). A diary entry by Olga Wisinger-Florian, who was trained by landscape painter Emil Jakob Schindler, testifies that her painting “Im Bauerngarten” is a very special work. When the painting was first exhibited at the Munich Kunstverein in 1898, it met with great approval and was acquired by Prince Regent Luitpold of Bavaria (€ 250,000 – 350,000). Country life
A series of Austrian paintings transports us into the (illusory) idyll of the Biedermeier era. A politically raucous time, during which one withdrew into family life and the home of one’s dreams. Ferdinand Georg Waldmüller, probably the most important painter of that epoch, had fallen out with the Academy of Arts in Vienna and had moved to the countryside, celebrating rural life in his mostly many-figured genre paintings. As in “Preparations for the Wine Festival”, a painting convincing in its refined perspective, or in “The Grandparents’ Visit” (€ 120,000 - 180,000 and € 80,000 - 140,000). Both pictures are to be auctioned to the benefit of the “sight loss charity” of the Vision Foundation, UK. Rosalia Amon, Waldmüller’s best student, could, much like her teacher, skilfully accentuate natural light. Flowers, to wit “The Withered Rosebud”, also serve the artist symbolically for pictorial narratives (€ 36,000 - 45,000). Children were a popular theme in the Biedermeier era, as was the case with Johann Baptist Reiter in his “Village School” and also “Sisterly Love” (€ 10,000 – 14,000 and € 7,000 – 10,000). Countervailing in this ideal world is someone like Johann Matthias Ranftl, with his depiction of young brushwood gatherers (€ 18,000 – 25,000).