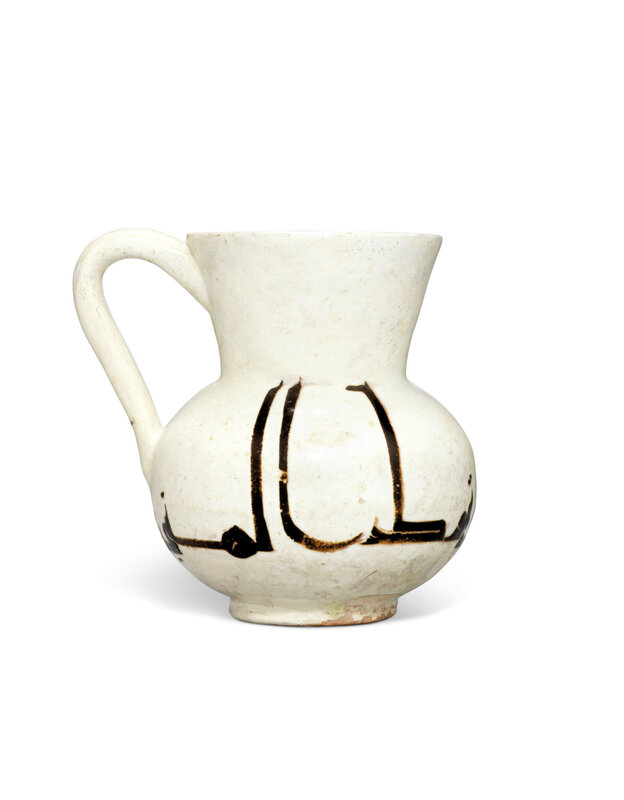 Of conical form, with bold, black eastern kufic inscriptions to the centre and around the rim, repaired breaks, very slight losses.

Provenance: With Joseph Soustiel by 1982.

Note: Samanid potters can be credited with the invention and perfection of slip-painted pottery – in which clarity of design was achieved by painting brownish pigment mixed with slip on a white engobe which is painted over the red earthenware before being covered by the completely clear glaze. These ceramics are amongst the first pieces produced in the Islamic world where epigraphy is the sole ornament. Large numbers of them were excavated at Nishapur and Samarqand (Afrasiyab) and although none is dated, they are roughly datable to the 10th century and a period that corresponds to Samanid rule (874-1005).

An extremely elegant Arabic inscription gives startling splendour to this fine jug. Written in black, four words are powerfully balanced around the bulbous body, with an almond-shaped lozenge marking the end of the phrase. The black slip is raised slightly above the white surface; a carving tool has been used to sharpen its contours. The reddish earthenware body, including the base, is covered almost entirely in white slip and a clear glaze.

There are relatively few extant example of Samanid jugs in comparison to dishes, making our example particularly rare. It is closely related to that in the Harvard Museum of Art (acc.no. 2002.50.91). Another Samanid jug was sold at Sotheby’s London, 3 October 2012, lot 10. For a full discussion on Samanid epigraphic wares see previous lot.