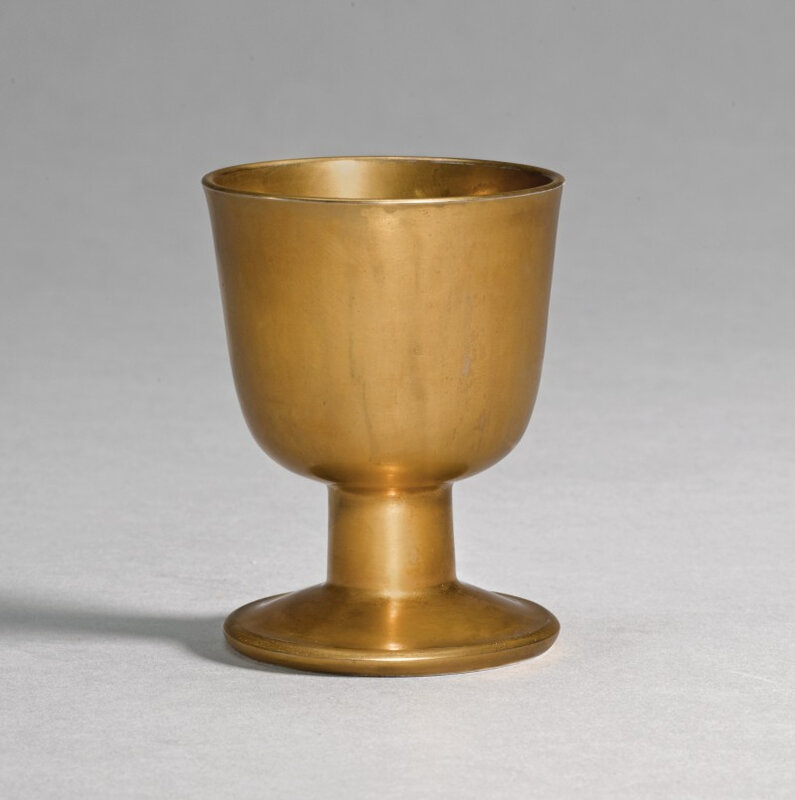 with a deep U-shaped cup supported on a short stem rising from a wide splayed foot, richly covered overall save for the base with an even gold enamel, the white base inscribed with a six-character reign mark in underglaze blue.

Note: Stemcups of this form covered entirely in gold enamel are very rare and no other closely related example appears to have been published. While originating in the Song dynasty (960-1279), this stunning glaze was revived and perfected in the Kangxi period (r. 1662-1722). The Jesuit missionary Père François-Xavier d'Entrecolles (1644-1741) describes in detail its manufacture, noting that gold was grinded, left to dry and then mixed with white lead before being applied to a porcelain vessel.

Compare a much larger gold-enamelled stembowl and cover of different form and lacking the reign mark, in the Fondation Baur, Geneva, included in the Museum’s exhibition Mille Ans de Monochrome, Geneva, 2018, cat. no. 166; another example from the H.M. Knight collection, sold in these rooms, 11th December 1979, lot 327; and a third cup from the collection of Ira and Nancy Koger, sold at Christie’s New York, 14th September 2006, lot 406. Compare also a Yongzheng mark and period stemcup of this form decorated in gilt with a dragon against a black ground, in the Palace Museum, Beijing, illustrated in The Complete Collection of Treasures of the Palace Museum, Monochrome Porcelain, Hong Kong, 1999, pl. 122.