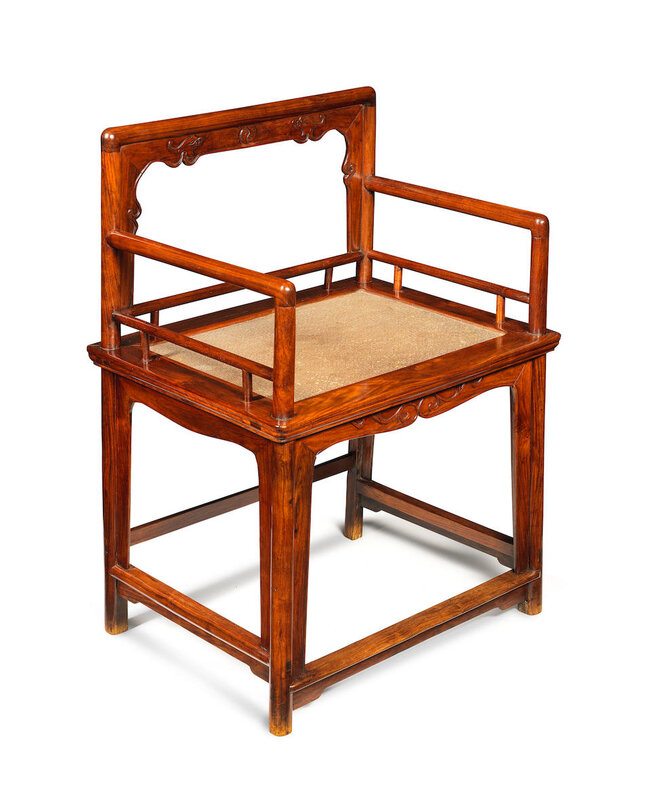 Each with a rectangular top rail mortised and tenoned to the stiles, set with a beaded-edge apron shaped with curving scrolls enclosing two confronted chilong heads contending the yin and yang symbol, all tongue-and-grooved into the top rail, the stiles continuing through the seat frame and extending as the back legs, the arms mortise and tenon to the stiles and posts, continuing through the seat and extending as the front legs, the hard cane seat bordered by a horizontal stretcher set with vertical pillar-shaped struts below, the front beaded-edged apron carved in low relief with meandering tendrils, the side aprons and the back apron left plain, the front legs joined by a shaped footrest atop a plain shaped apron on the front and aprons on the sides, the legs joined by rounded square stretchers.

Provenance: an English private collection, and thence by descent
The collection was formed by the grandfather of the former owner who was the Assistant Commissioner, Shanghai Municipal Police, 1919-1928. His father was a Protestant missionary in China. The family returned to England shortly after the Second World War.

Note: Notable for their refined elegance, slender lines and light construction, the present chairs are exceptional examples of their type.

Chairs displaying a low rectangular back, only slightly higher than the arms, which were placed at right angles to the front posts, were referred to as 'rose chairs, meiguiyi, or writing chairs, wenyi. The straight back and arms gave a sense of austerity to the scholars sitting in them and would fit neatly under the window of a scholar's studio, without obstructing the view outside.

Much praised for their compact proportions, meiguiyi chairs are characterised by their top rail and arms curving smoothly into the posts, imitating the flexibility of bamboo by means of complex mortise-and-tenon joints. Moreover, the chairs are lightened by the use of the humpback stretchers with pillar-shaped struts above the seat frame. This design is thought to have been inspired by a low-back armchair manufactured during the Song dynasty, an example of which is depicted in a twelfth century painting by Ma Gongxian (act.1131-1162). Here Li Ao (d.ca. 844), a Confucian scholar, is seeking instruction from Yaoshan Weiyan (751-834), a Chan master, who is seated on a low bamboo chair which resembles the construction of a meiguiyi, with the addition of a back rest.

Low-back armchairs were also frequently depicted in paintings and prints dating to the Ming and Qing dynasties. A 'Literary Gathering in the Apricot Garden', painted by the court artist Xie Huan (act.1426-1452), features 'The Three Yangs' scholars of the Hanlin Academy besides bamboo and hardwood low-back armchairs.

Meiguiyi armchairs also served as informal seats for women: this is visible on a woodblock print illustration to 'Phoenix Seeks a Mate' Huang Qiu Feng, a drama dating to the Qing dynasty, which depicts three court ladies seated on low-back armchairs.

Smaller and less formal than the 'yoke-back' or 'horseshoe-back' armchair, low-back armchairs were often more ornately decorated, displaying decorative frames and stretchers on the back panels, such as the present examples. The back frame of the present examples features an elaborate silhouette embellished with delicate designs of angular spirals and perky chi dragons enclosing the yin/yang symbol, while the arch-shaped frame of the base displays a curling tendril motif on the seat apron.

For a detailed discussion of low-back armchairs meiguiyi and their Song dynasty origin, see S.Handler, 'Rose, Bamboo and the Low-Back Armchair', in Chinese Furniture: Selected Articles from Orientations, 1984-1999, Hong Kong, 1999, pp.250-256. See also Wang Shixiang, 'Development of Furniture Design and Construction from the Song to the Ming', ibid., p.44.