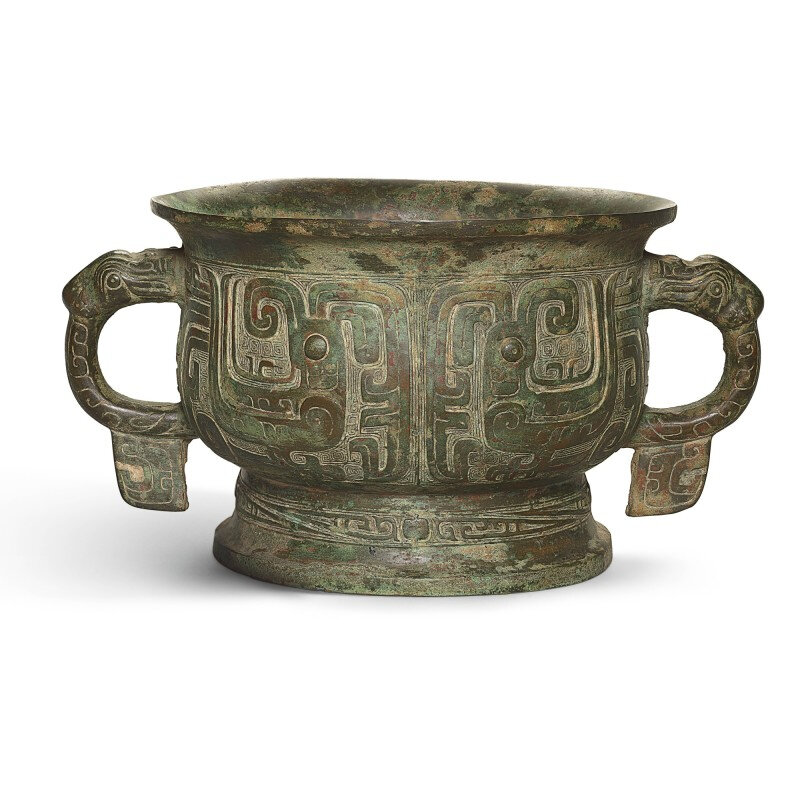 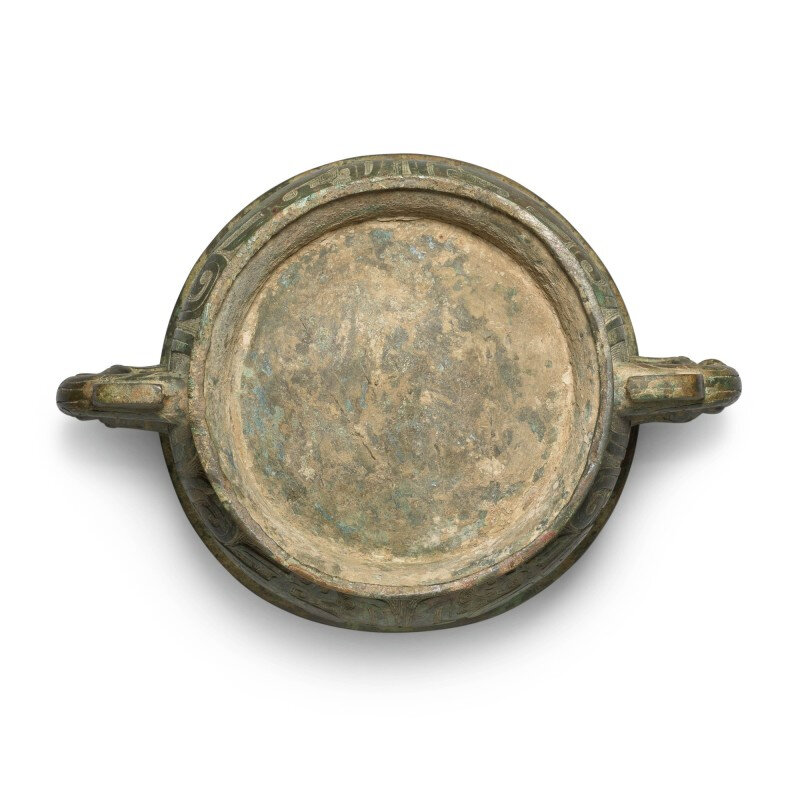 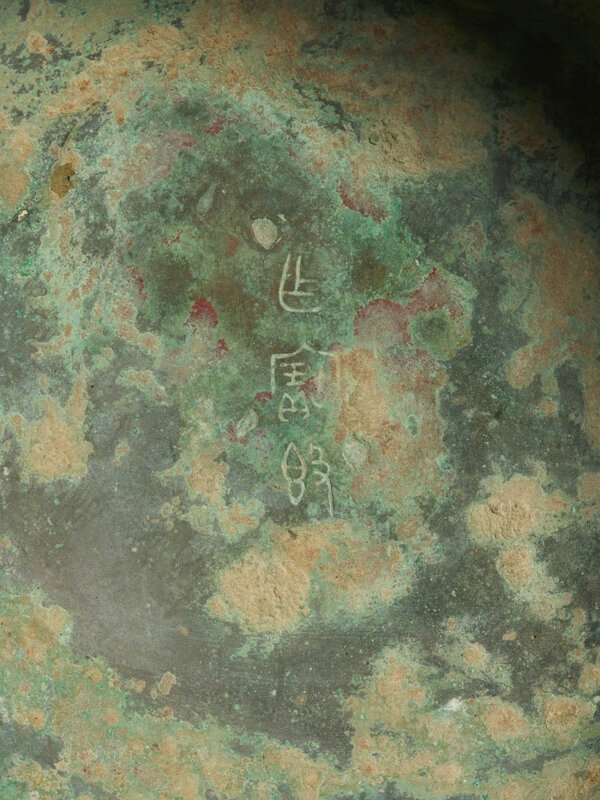 of large size, the wide rounded body raised on a tall splayed foot, crisply cast in relief on each side with a pair of prominent confronted birds, each with flamboyant plumed crests, with raised eyes and heads turned back towards a high plumed tail circling their bodies, all on a ground of leiwen, flanked by flanged handles with intaglio scrolls issuing from horned bovine heads set with pendant tabs, the base encircled by a narrow band of confronted stylized dragons, the inside with three pictograms zuo bao gui, the smooth surface patinated to a greenish-brown tone.

Note: Pairs of large confronted birds prominently displaying flamboyant plumed crests and tails encircling the head and body fill the space on both sides of this magnificent bronze vessel. In the evolution of this particular motif the birds represented on this gui appear at the height in the middle of the Western Zhou dynasty. During the Anyang phase of the Shang dynasty, small birds occupied secondary positions in subordinate registers in the overall designs of ritual bronzes. Only in the early part of the Western Zhou period did bird motifs suddenly appear in more prominent placements on ritual vessels. Parallel to the bird motifs moving to central positions on bronzes, the sizes and forms of birds changed, an adaptation that was may have been linked to new vessel shapes such as you and gui. Tall birds with arched plumes and tails appear on vessels of more generous rounded proportions such as the present gui whose forms they enhanced. Jessica Rawson who describes the evolution of the bird motif on Western Zhou bronzes, notes that during the middle Western Zhou period large plumed birds motifs on vessels such as gui and you formed a small but influential series and enjoyed comparatively short lived popularity, see Jessica Rawson, Western Zhou Ritual Bronzes from the Arthur M. Sackler Collections, Washington, D.C., 1990, pp. 79-80. On vessels such as the present gui, confronted pairs of large birds with arched plumage create a continuous, fluid movement that presents a stark contrast to the angular compartmented designs on Shang and early Western Zhou bronzes.

Vessels cast with this particular type of large, flamboyant bird designs are rare. Compare two gui of smaller size with a very similar motif in the Freer Gallery of Art, Washington DC, published in John Alexander Pope, Rutherford John Gettens, James Cahill and Noel Barnard (eds.), The Freer Chinese Bronzes, Vol. I, Catalogue, Washington, 1967, pls. 69 and 70. Jung Keng illustrates another two gui cast with large birds in his The Bronzes of Shang and Chou, Vol. II, Yenching Journal of Chinese Studies Monograph Series No. 17, Yenching University, Beijing, 1941, pp. 146 and 147, nos. 271 and 272. Compare also closely related examples including a gui with a cover, from a mid-Western Zhou dynasty tomb excavated at Zhuangbaijia, Fufeng county, Shaanxi province, published in Zhongguo qingtongqi quanji, vol. 5, Beijing, 1996, pl. 59. A gui with a related design in the Palace Museum, Beijing, from the Qing court collection, with similar large bird on the body, is illustrated in The Complete Collection of Treasures of the Palace Museum. Bronze Ritual Vessels and Musical Instruments, Hong Kong, 2006, pl. 30