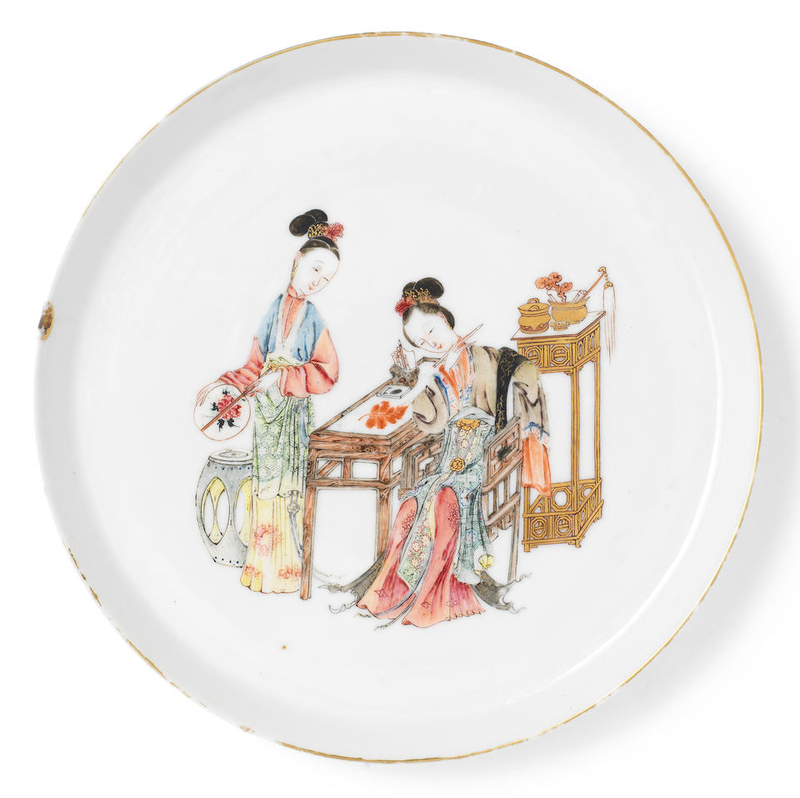 Each potted with shallow rounded sides rising to an everted rim, the interior finely painted with a seated lavishly dressed lady painting a leaf by a table, her attendant holding a floral fan to her side, a group of lingzhi stems, fly whisk and incense burner resting on the gilt stand behind them, one dish with brush, ingot and ruyi-sceptre maker's mark.

Note: Leonard Gow (1859-1936), born in Glasgow, Scotland, was the son of a shipping magnate also called Leonard Gow (1824-1910), who established the Glen Line to trade between London, Singapore, China and Japan. Leonard junior eventually became the senior partner in the shipping company Gow, Harrison & Co., a director of Burmah Oil, and chairman of several other companies. A noted philanthropist, Gow established in 1919 a lectureship in the Medical Diseases in Infancy and Childhood at Glasgow University, where he had studied moral philosophy. Glasgow University presented Gow with an honorary doctorate degree in law in 1934. Gow built one of the finest collections of Qing ceramics in the early years of the 20th century, which gained international recognition through a series of ten articles by R.L.Hobson in The Burlington Magazine and through Hobson's catalogue, which Gow published privately in a limited edition of 300 copies in 1931. Part of his collection was exhibited in the Glasgow Art Gallery.

One dish has an underglaze-blue mark of a brush (bi), an ingot (ding) and a ruyi-sceptre, tied with ribbons, forming the rebus bi ding ruyi signifying 'may all certainly be as you wish'.

Compare with a slightly smaller dish (17.1cm) in the Palace Museum collection, Beijing, illustrated in Porcelains with Cloisonné Enamel Decoration and Famille Rose Decoration, Hong Kong, 1999, p.74. See two other dishes in the Victoria and Albert Museum, London, nos.640-1907 and 649-1907.