Lark Mason Associates rings up $765,790 for Fall Sale of Asian, Ancient and Ethnographic Works of Art

Lark Mason Associates rings up $765,790 for Fall Sale of Asian, Ancient and Ethnographic Works of Art 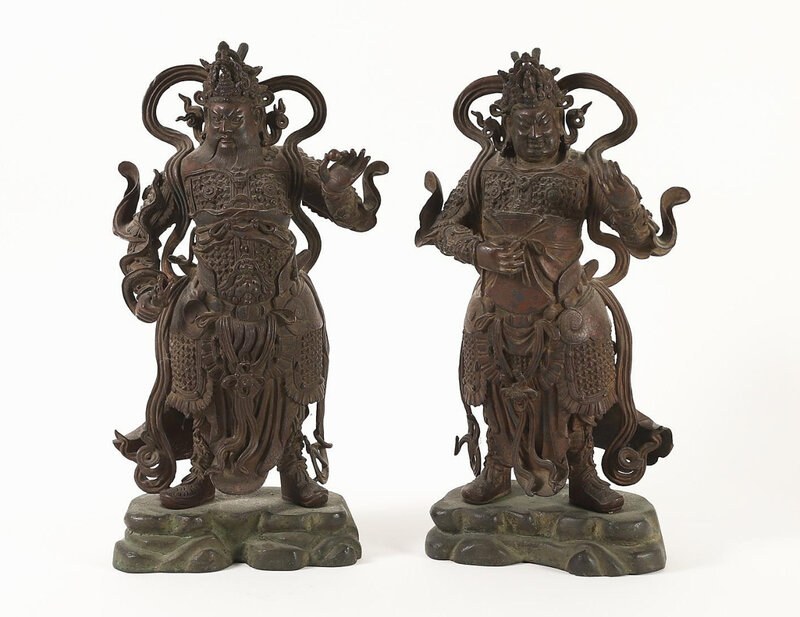 NEW YORK, NY.- The impressive array of rare Chinese 18th century cloisonné, huanghuali furniture, ancient bronzes and archaic jades presented by Lark Mason Associates on the iGavelAuctions.com platform rang up $765,790 in sales including buyer’s premium. With a two-thirds sell-through of the nearly 300 lots, a third of the objects went into extended bidding including a pair of Chinese Lacquered Bronze Guardian Figures, Ming Dynasty, which hammered $187,500, far exceeding its estimate of $12,000-18,000; and a Chinese Western Zhou Style Bronze Gui’ which brought $71,500.

“We try to target those bidders and buyers who are going to be interested in the high end of the market. We spend a lot of time doing promotional work for all of our lots that have a higher value. We’re attracting that top group of buyers who will compete against each other. We always have new buyers but I’m focused primarily on deep-pocketed buyers who can go after the top ten to 20 lots in the sale, who may end up buying other things as well. In doing so, we think that’s how we can achieve the prices like we saw on the bronze guardians.”

The guardians Mason was referencing was a pair of 17-inch-tall Chinese Ming dynasty lacquered bronze guardian figures that led the sale, bringing $187,500 from an international buyer. Mason had handled them in 1983, when they had been offered in a sale of fine jades, Chinese works of art and furniture at Sotheby’s. As it turns out, such noteworthy provenance was as much a factor in the price realized as the quality of workmanship for the pair.

“In the world we’re in now, where there are a lot of items on the market of suspicious nature or uncertain authorship, it really helps to have a history of ownership. A lot of the items in the sale had that and it was very instrumental in the strong prices we achieved overall.” He noted that the market for archaic bronzes had been strong for a while, and that the offerings in the sale had been sourced from a number of sellers throughout the United States.

The second highest price in the sale was $71,875, achieved for a Chinese Western Zhou bronze Gui, that had been estimated at $500/800 and sparked an online bidding war between international competitors before closing to a Chinese buyer. The piece had been consigned without provenance and though Mason thought the piece looked authentic and age-appropriate, he could not do the scientific testing he would normally do so he priced them conservatively. “We are pleased that our sale generated such enthusiasm among our bidders,” says Lark Mason. “There were a number of important pieces that attracted the attention of discerning collectors who recognized their quality and provenance.” According to Mason, many of the pieces came from private collectors who purchased the very best in each of the categories from a variety of international galleries such as C.T. Loo and Sydney L. Moss, Ltd. and from the estates of the Christian R. Holmes Collection and Sotheby’s from the 1960s-1990s.

Workmanship and provenance combined to propel a Shang dynasty (1600-1046 BCE) Chinese bronze jue to $33,150 from a Chinese buyer against an estimate of $1,5/2,500. Despite some condition issues that Mason said one should expect with a piece of that age, the piece had documented provenance to noted Chinese works of art dealer C.T. Loo and Frank Caro, who was Loo’s predecessor in New York City. While most of the top results in the sale were achieved by archaic bronzes, other collecting categories also saw strong prices. A Chinese Ming dynasty polychromed wood seated figure of a Luohan that an international buyer won for $32,500 from an estimate of $5/8,000. Several factors contributed to the result, not least of which was Mason’s professional relationships with two of the previous owners of the piece: Gary Bachman, a Philadelphia-based collector of Asian works of art, and the collection of Fong Chow, who had been a curator of Oriental Art at the Metropolitan Museum of Art in New York City. Mason said the Luohan, which was probably from a larger set of 18 that would have been done for a temple, was “unusual because it has its original pigments and is in very good condition. People are looking for things that have not been overly restored.” “It’s very unusual for people to keep records,” Mason said. “Some things were bought by collectors, when prices were low, perhaps as a hobby or a one-time purchase. Heirs don’t always realize the value of the documentation.” In the case of a Chinese Shang dynasty (1600-1046 BCE) bronze gu vessel, its paperwork happily survived and recorded not only provenance to the A.J. Abbey collection in London prior to 1950 but also documentation from 1965 from Sydney L. Moss, Ltd. “Typically these do not make a huge price but you couldn’t have better documentation.” An international buyer took it to $30,625 from an estimate of $3/5,000. 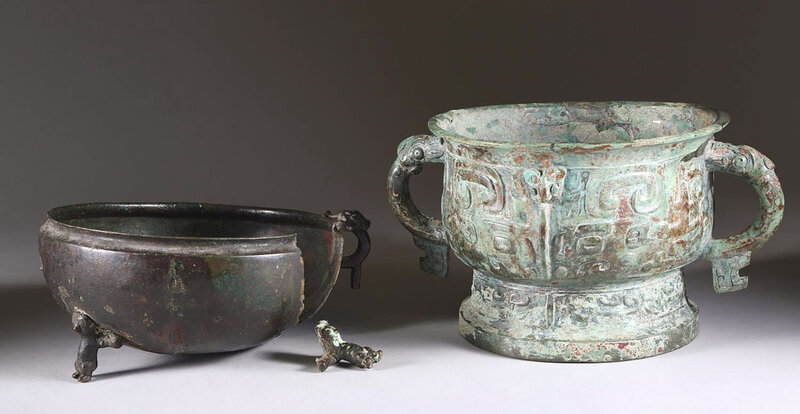 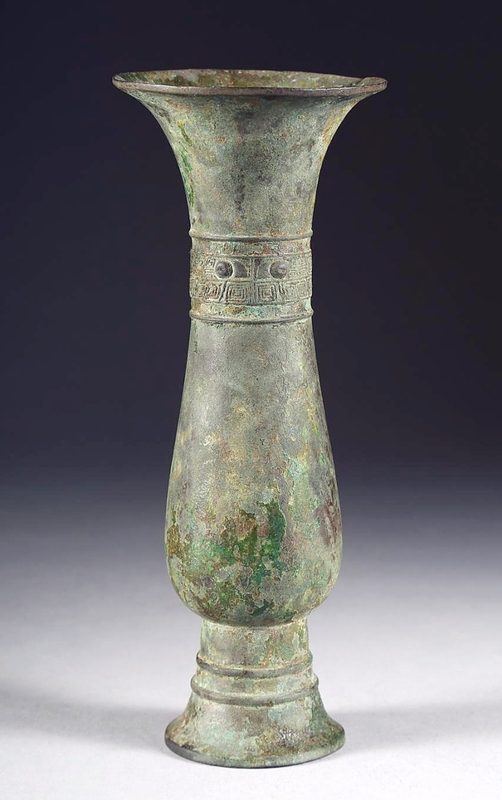 “Much of it was made of huanghuali wood, which is prized. It’s not that the Chinese furniture market is declining but buyers require a high degree of originality and many of the pieces in the sale had condition issues,” were Mason’s thoughts on the offerings of Chinese furniture, which saw mixed results throughout the sale. The strongest price of $25,000 came for a Chinese huanghuali recessed-leg long table that had provenance to both the Robert Ellsworth collection and the Nelson Atkins Museum gallery. It had an estimate of $40/60,000 and sold on one bid to an international buyer. Mason noted that the table had been reduced in size and was probably assembled from both older and newer parts. “The jade market is quite strong,” Mason commented, referring to a handful of lots that did particularly well. Most notable among those on offer were a group of jade and other carvings, dated to the Zhou dynasty and later, which included a celadon jade huang that had been sold at Sotheby’s in 1983 and a carved fish that had been in the collection of Mrs Christian R. Holmes, a noted collector. The group brought 14,375 from a Chinese buyer, while a single carved celadon and russet jade huang, dated to the Western Zhou dynasty (1027-771 BCE) with provenance to another Sotheby’s sale, went out at $13,750. From the collection of Mrs Christian R. Holmes. A group of Jade and other Carvings, Zhou Dynasty and Later. Estimate $1,000-1,500. Lot sold $14,375 to a Chinese buyer. Courtesy Lark Mason Associates. One of the top lots to sell to a buyer in Europe was a Chinese Tang dynasty straw-glazed pottery amphora that Mason described as “a wonderful object. The quality was great and it is an iconic form.” The additional provenance to London dealer John Berwald helped boost it from an estimate of $4/6,000 to sell for $9,375. Other noteworthy results among ceramics was $4,687 for a large Chinese underglaze blue lotus decorated porcelain planter, Qing dynasty ($800-$1,200) and $3,000 for a Chinese Song dynasty brown-glazed tea bowl ($1,5/2,000).