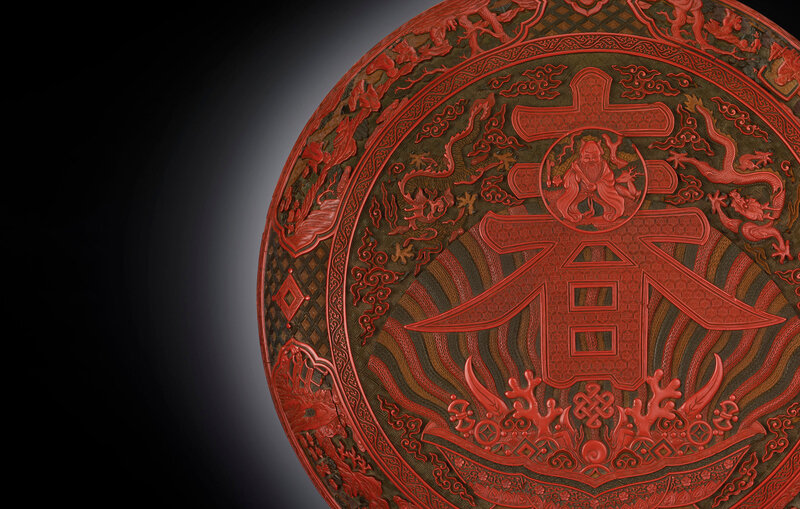 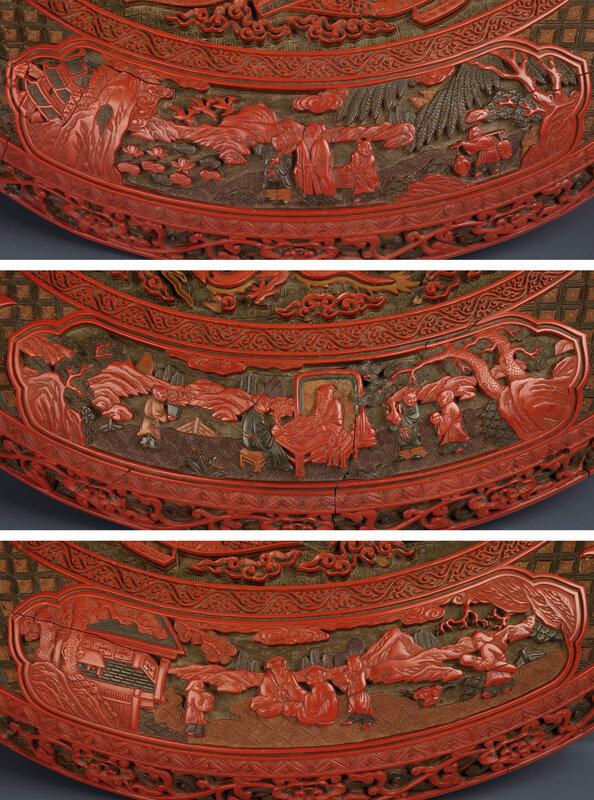 The top of the cover with a circular panel is deeply carved on a green Wan-diaper ground with a bowl of Precious Objects, radiating red, green and yellow rays illuminating the large character Chun, 'Spring', centred with a roundel enclosing Shoulao and a deer in a landscape, the central motif flanked by a pair of sinuous dragons amidst scrolling clouds. The rounded sides of the box and cover are carved with panels of scholars and attendants, divided by the Babao, the rims encircled by lingzhi scrolls. The base is lacquered black, incised and gilt to the centre with a Qianlong reign mark, followed by the characters (first character effaced) shou bao he.

Note: The missing character on the base of this box, effaced due to an old repair, would have been Chun, and the four characters together should read as 'Chunshou Baohe, 'Treasure Box of Spring and Longevity'.

The motifs decorating this box and others like it are all very auspicious. The character Chun (Spring) on the cover is also a metaphor for youth. Combined with the overlaying roundel of Shoulao, the God of Longevity, the box would have represented wishes for eternal youth. These combined with the other imagery: the dragons amidst clouds, the rays rising from the bowl of 'treasures' and the Buddhist emblems arrayed around the sides also add to the auspicious nature of the box.

Qing dynasty boxes of this design were inspired by Jiajing period examples (1522-1566) such as the one in the National Palace Museum, illustrated in Carving the Subtle Radiance of Colors. Treasured Lacquerware in the National Palace Museum, Taipei, 2008, pl. 87; and another one included in the Hong Kong O.C.S exhibition, 2000 Years of Chinese Lacquer, Art Gallery, Chinese University of Hong Kong, 24 September - 21 November 1993, pp.120-1, no. 61. These boxes were so admired by the Qianlong Emperor that he ordered a number of copies during his reign, and they were frequently used to hold food presented as a ceremonial gift at the lunar new year or for birthdays.

Christie's. Through Connoisseurs' Eyes - Works of Art for the Emperor, Hong Kong, 28 May 2014