The collections of two female Chinese-American entrepreneurs offered at Bonhams

The collections of two female Chinese-American entrepreneurs offered at Bonhams LOS ANGELES, CA.- When the young Cecilia Chiang and Rosalind Ching Pastor arrived in the United States in the mid-20th century to start their new lives, they carried little more than other travellers brought: suitcases and hope. Although the two women did not cross paths throughout their lifetime, they would be surprised to hear how similar their stories are – both growing out of their privileged upbringing in China to independently establish their entrepreneurial careers through hard work in America. Cecilia Chiang became a renowned restaurateur and Rosalind Ching Pastor an art businesswoman. Along the way, art collecting became a language with which they expressed their personality and attitude to life. In December, Bonhams Los Angeles presents property from the collections of Cecilia Chiang and Rosalind Ching Pastor.

Cecilia Chiang
For many American gastronomes, the name Cecilia Chiang and her restaurants The Mandarin couldn’t be more familiar. Lauded by the San Francisco Chronicle for having ‘brought new levels of sophistication to Chinese cuisine in America,’ Cecilia, who was born into a wealthy family near Shanghai, China in 1920, didn’t come into her success for nothing. Having experienced the tumultuous times of Japanese occupation and the civil war, Cecilia found herself, almost by accident, in San Francisco in 1960 with an opportunity to run a restaurant, after her two business partners backed out on the deal and the landlord refused to refund her initial down payment. Short of staff, she even had to scrub the kitchen floors by herself at the start Over time however, The Mandarin began to attract loyal customers and food-world luminaries, largely due to Chiang’s charismatic presence and her authentic Mandarin cuisine, which at the time had very limited exposure in the area. What followed was a move to a 300-seat location in Ghirardelli Square and a second Mandarin in Beverly Hills, where tables filled and lines formed outside the door day after day. Her affable and gregarious character also shows in her collection comprising many Chinese paintings, textiles and ceramics. One of them is a coveted hardwood mahjong table, at which she gathered for decades to play with her friends from San Francisco’s high society. The mahjong table with four chairs will be offered in Bonhams Los Angeles sale of Asian Decorative Works of Art with an estimate of US$1,500-2,500.

Rosalind Ching Pastor
Shanghai-born Rosalind Ching Pastor came from a family of collectors and foreign diplomats. In 1950, she travelled to Chicago for the first time to visit a trade show at Navy Pier. Captivated by the city, she decided to make it her new home. Soon enough, Rosalind established herself as an entrepreneur, art businesswoman and respected collector. She started Ching & Company, a highly successful Michigan Avenue boutique featuring high-end Chinese textiles and antiquities. Meanwhile, she was also forming a sizeable collection of art under the guidance of Zhuang Yan and Na Zhiliang of the Taipei National Palace Museum, and her uncle, C.F. Yao, the owner of the prestigious Tonying & Company. The collection later became the subject of a published exhibition at the Honolulu Academy of Art in 2005.

Rosalind was a woman of refined taste, and she found her expression of beauty through collecting works featuring elegant women in social settings. These include many enamelled porcelains from the 18th and 19th century depicting women enjoying leisurely pursuits and each other’s company; as well as a magnificent painting Twelve Beauties from the Dream of the Red Chamber, which graced the entryway to her home.

The twelve women in this painting appear to refer to specific characters in Cao Xueqin's famous late Ming dynasty novel Dream of the Red Chamber. Depicting the ‘Twelve Beauties of Jinling,’ there are hints suggesting the identity of each beauty: the gold ‘lock’ plaque worn on the lady second to the left alludes to Xue Baochai, whereas the first figure in the foreground on the right holding an orchid blossom is clearly the melancholic Lin Daiyu, who buried fallen blossoms in two scenes in the novel. Part of an exhibition at the Art Institute of Chicago in the late 1990s, this rare and important painting will be offered in the Fine Chinese and Japanese Works of Art sale on 14 December, with an auction estimate of US$40,000 – 60,000. 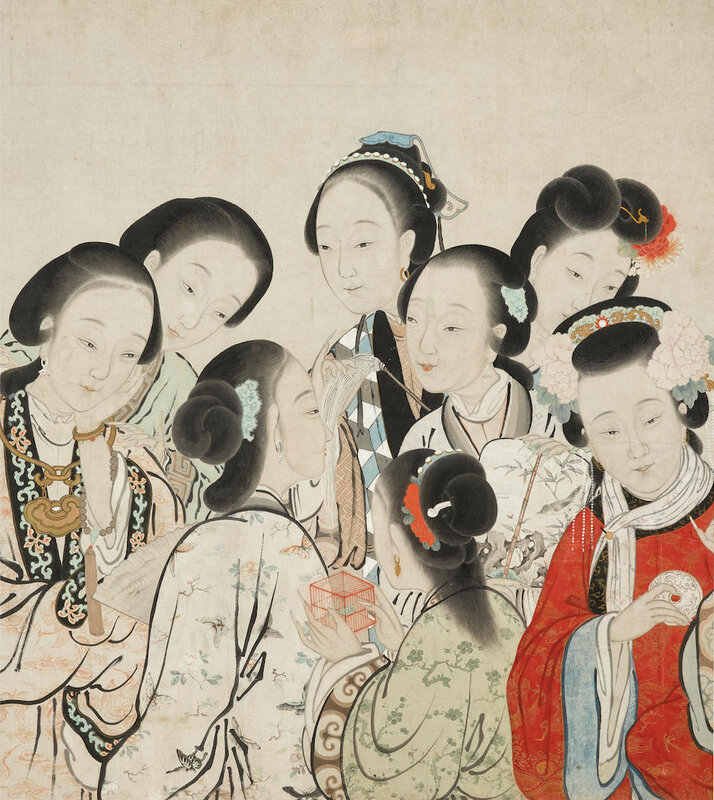 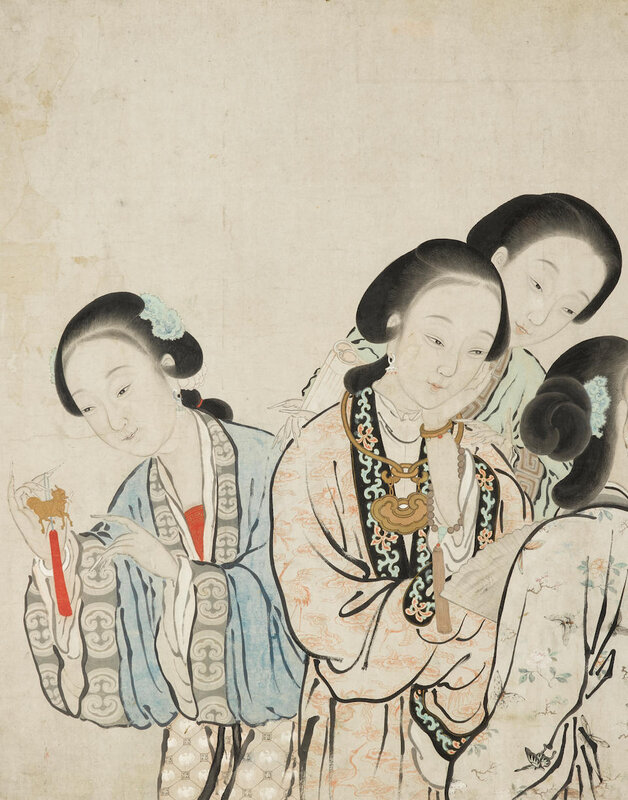 Note: The artist's portrayal of the twelve women in this painting appears to refer to specific characters in Cao Xueqin's novel Hong Lou Meng 紅樓夢 (Dream of the Red Chamber), possibly the "Twelve Beauties of Jinling" 金陵十二釵. For example, the beauty at the far left holds a gold qilin, referencing the character Shi Xiangyun 史湘雲 who was given a gold qilin by the novel's protagonist Jia Baoyu 賈寶玉. The beauty to her immediate right sports a gold "lock" plaque 金鎖, referencing Xue Baochai 薛寶釵 who famously wore such a plaque. Further, the fifth figure from the left wears a nun's robes and fingers a duster, referencing the beauteous Buddhist nun Miaoyu 妙玉 who resided in the Grand View Garden with the other women and Jia Baoyu, and the first figure in the foreground on the right delicately holds an orchid blossom in her hand, referencing the melancholic Lin Daiyu 林黛玉 who buried fallen blossoms in two scenes in the novel.

In his discussion of 17th-18th century vernacular paintings made by professional artists for wealthy patrons, James Cahill suggested that large-sized paintings of multiple figures (of women) such as the present lot were likely intended for public display in restaurants, wine shops, or even brothels, and often depicted courtesans (James Cahill, Pictures for Use and Pleasure: Vernacular Painting in High Qing China, University of California Press, Berkeley, California, 2010, p. 152-3). While unsigned, this painting bears a seal reading Zhenran. An accomplished painter of traditional scholarly subjects such as landscape, flowers, and religious figures, the monk Zhenran (1816-1884) was nonetheless obliged to paint for his livelihood, and was known to have been disparaged by connoisseurs for painting according to the fashion of the day. Perhaps the present lot was painted to fulfill a special commission for an image of a large group of beautiful women that, by association with characters in the beloved novel Hong Lou Meng, was elevated beyond conventional meiren paintings on public display.

Other highlights from Mrs Pastor’s collection include: Dessa Goddard, US Head, Asian Art at Bonhams said: “To have collections from two such storied individuals who, at a time when women had to work harder than ever to succeed in a foreign country, is a true privilege. Their talents as entrepreneurs were matched by their eye for aesthetics, as both collections feature works of great beauty. With both passing away last year, Cecilia at 100 and Rosalind Ching at 99, we hope their story and art will continue to inspire the next generation of collectors.”