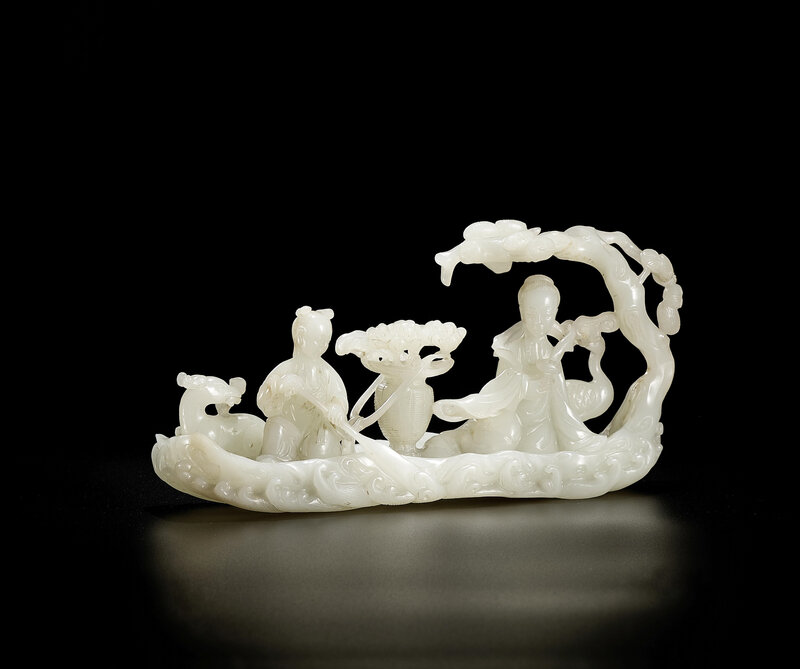 Elaborately carved in intricate relief and openwork as a log raft ferrying the Immortal Magu holding a ruyi sceptre and seated in front of a crane grasping a lingzhi stem in its beak beneath the branch of the pine tree growing from the corner of the gnarled tree-trunk raft, centre of the raft with a basket of blooming flowers and lingzhi fungus, a recumbent deer with its head turned towards the back beside the attendant paddling at the front, the base carved as the gnarled underside of the raft atop swirling waves, the softly polished semi-translucent stone of pale greenish-white tone, wood stand.

Note: The present lot demonstrates the skilfull craftsmanship and creativity achieved in the jade ateliers during the mid Qing period. Magu is the female equivalent of the Daoist God of Longevity, Shoulao, and is a symbolic protector of women in Chinese mythology. In Chinese literature Magu is described as a beautiful young woman with long birdlike fingernails. In many instances she is portrayed sailing on a log raft, with a basket full of flowers and an attendant. She was believed to be able to brew longevity wine from lingzhi fungus and to turn kernels of rice into pearls.

In the present carving, Magu holds a ruyi sceptre and is accompanied by a crane and a deer, each holding in its mouth the stem of a lingzhi fungus; together with the presence of pine, a long-lived evergreen, these convey the wish for longevity.

Compare a closely-related pale greenish-white jade raft group, similarly carved with Magu seated beneath a pine tree on a log raft, which was sold at Christie's New York, 15 September 2011, lot 1035. See also a related Imperial white jade carving of Zhang Qian on a raft, Qianlong seal mark and period, which was sold at Bonhams Hong Kong, 29 May 2018, lot 37. 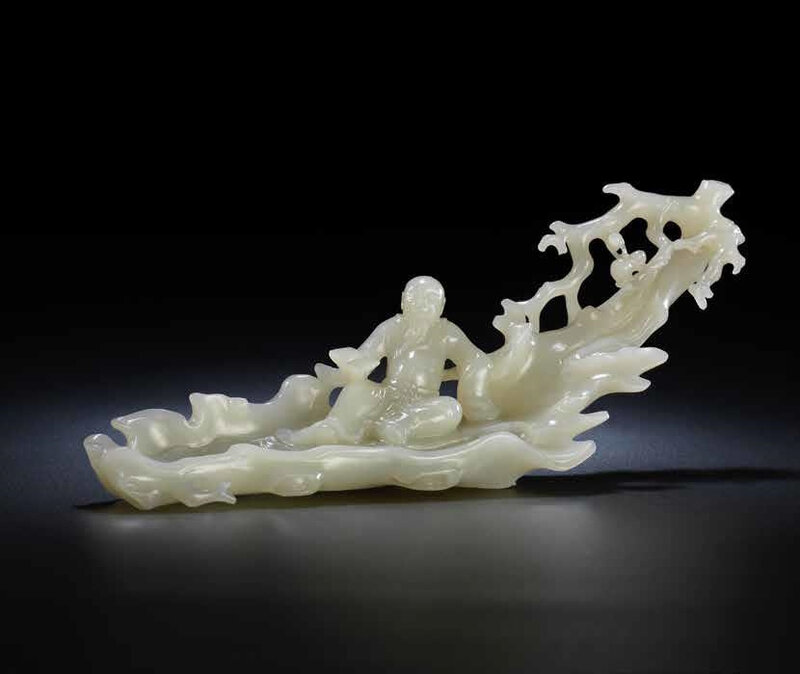