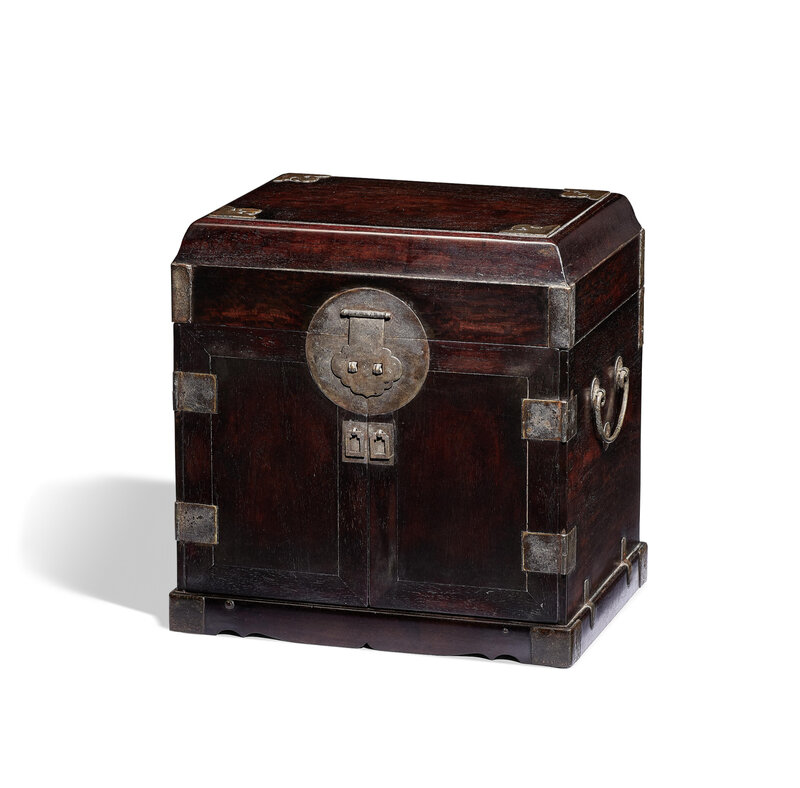 Of rectangular form embellished with metal mounts at the corners, the hinged flat-top cover opening to reveal a separate upper compartment, above a pair of well-figured doors concealing four short and one long drawers, the cover set with a chain to hold the lid in place when open, applied across the front cover and doors with a circular metal plate with lock receptacles and a ruyi-shaped clasp, above a pair of rectangular plates and pulls, all supported on a slightly larger base with a cusped lower edge to the front, the cabinet flanked by a pair of bail handles, the well-grained wood of a rich dark tone.

Note: Table cabinets of this type are also referred to as seal chests. They were used as dressing cases by both men and women to store toiletries, jewellery, and other valuables. They were also used on scholars' desks for the storage of stationery, writing implements and personal seals.

It is rare to find table cabinets of large size made of zitan wood such as the present lot. See a similar example illustrated in In Pursuit of Antiquities: Thirty-fifth Anniversary Exhibition of the Min Chiu Society, Hong Kong, 1995, p.298. See also a zitan canted-top table cabinet, late Ming to early Qing dynasty, of similar size from the Dr S.Y.Yip collection, illustrated by G.Wu Bruce, Zitan Furniture from the Ming and Qing dynasties, Hong Kong, 1999, pp.52-53, which was later sold at Sotheby's Hong Kong, 5 April 2017, lot 3512.