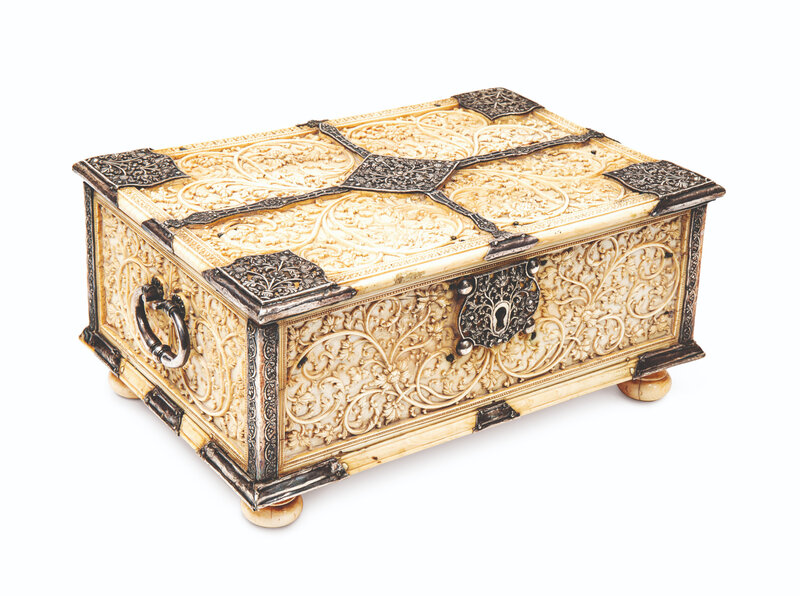 A large Singhalese silver mounted ivory box of flat and slightly protruding cover, on four turned feet. The carving quality of this casket is on a par with the best examples produced in Ceylon for the Portuguese market, until approximately 1658. Its dimensions and selection of materials, the artistic level of carving and the sophistication of silverwork make this box a unicum for its rarity and a tour de force on account of the technical and artistic quality that distinguishes it from other known pieces of the same origin. Silver mounted translucent, or blonde, tortoiseshell casket of silver mounts. For its rarity this extraordinary piece belongs to a group of approximately a dozen of identical origin that are recorded at various international museum collections. The lizard lock and snake handles were often depicted in Portuguese pieces, in which they assume a warning role to those attempting to violate the casket’s contents. Rare cabinet on stand of sophisticated ebony and ivory marquetry decoration and gilt copper hardware. On the door fronts the Habsburg crowned double-headed eagles, which would become the emblem for the religious Order of Saint Augustine.
From the inner door surfaces stand out stylised heraldic rampant lions framed by a border of foliage scrolls alternating with lion’s heads that is also repeated on the front. Stylised depictions of vultures decorate the cabinet’s drawer fronts and carved openwork feet.

This cabinet, until recently the property of a Spanish family, was most certainly commissioned for the crown, for an important aristocratic family or for a high ranking dignitary of the Augustinian Order in the period when the Spanish Habsburgs sat on the Portuguese throne (1580-1640). 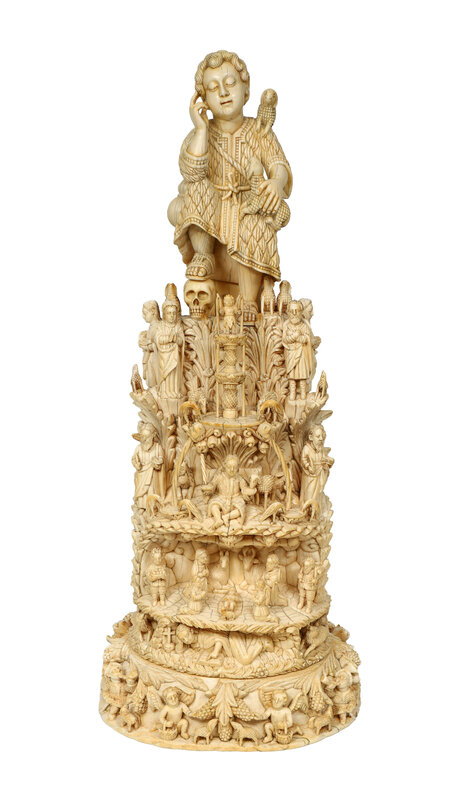 An extraordinary sculpture for its unusual size and artistic quality, the elaborate composition depicts the evangelical scene of The Baby Jesus as The Good Shepherd or The Parable of The Lost Sheep.

Seventeenth century missionaries stimulated the integration of autochthonous symbols within a western artistic frame, resulting in Luso-Asian artworks that were imbued with great creativity: in this instance the Child posture evokes the image of the meditative Buddha, while the terraced composition relates to the Gopuram towers in Hindu temples. An important 18th century ivory bracelet produced for an Oba, a local King or Dignitary. Designed as a double cylinder, the inner section is punctured outlining the carved decorative motifs. The outer surface follows a banded and mirrored decorative scheme alternating horizontal and vertical strips.

On one band the iconography illustrates the leadership of Owo or Benin flanked by his warriors. On the other two priests holding a snake encircling an Opan-Ifa and a mudfish, symbol of Olunkun. The ivory’s whiteness aludes to the sea surf hence reflecting the close relationship between the King and Olunkun, the Nigerian god of the Sea. 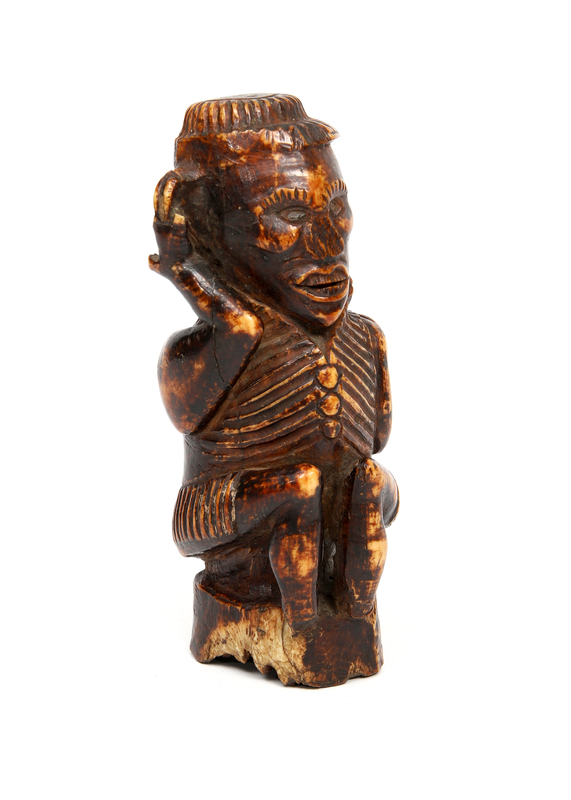 Figurative handles were produced in a variety of materials, ivory being the rarest and hence reserved for use by religious, political and social elites. This handle’s symbolic associations relate to leadership authority as well as to ritual attributes charged with mystic beliefs, aspirations and moral principles.

This figure fitted onto the top of a leader’s staff (Mvwala), an insignia carried by a Kongo ruler or government official. The Mvwala were essential in the perpetuating of memories passed down generations, as well as tools to communicate with subjects or to mediate between the worlds of the living and the dead. 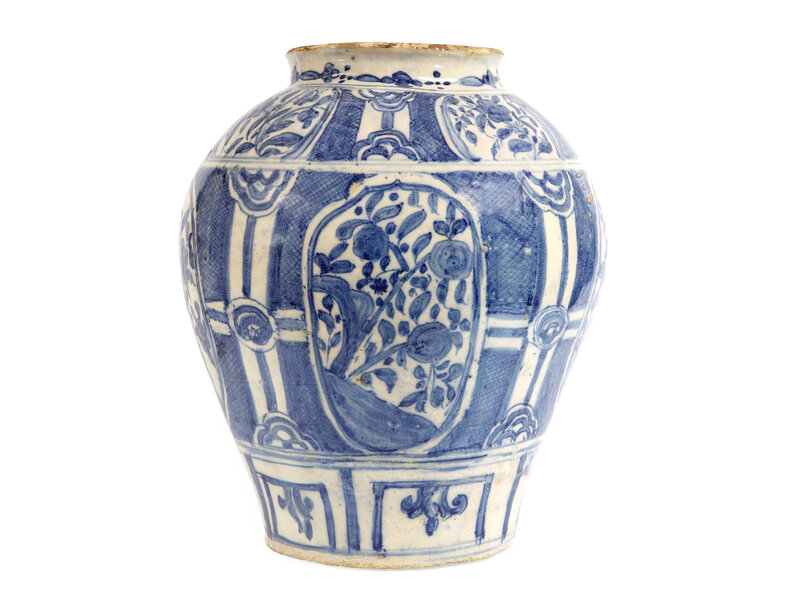 For its size and condition this pot is a rare survival of a short lived early 17th century Portuguese faience production that followed Chinese prototypes. Lisbon produced ceramic was a singular production of its age, not only for the fine paste, translucent glaze and bright blue pigment, but also for its innovative 'Chinoiserie' thematic that predated other European ceramic productions. A unique Turbo-marmoratus mother-of-pearl and tortoiseshell casket, with original gilt-silver mounts and decorative elements. The unusual lizard-shaped lock latch and double-headed serpent handle, as if guarding the box valuable contents, suggest its likely use as a jewelery safe-box. Its inner Mughal decoration, similar to contemporary paintings on paper, portray scenes with hunters dressed in late 16th century European attire, lions and flowering branches with birds, a decorative scheme found in an ivory box at the V&A Museum (inv. IS.39-1898).