WORCESTER, MASS.- This winter, the Worcester Art Museum will present The Kimono in Print: 300 Years of Japanese Design, the first show devoted to examining the kimono as a major source of inspiration and experimentation in Japanese print culture, from the Edo period (1603–1868) to the Meiji period (1868–1912). Drawing primarily on the Museum’s extensive collection of Japanese prints, the exhibition explores the complementary influence of design ideas between kimono and print artists—and the consumers interested in both kimonos and prints. The exhibition will be accompanied by the presentation of a one-of-a-kind, contemporary wedding kimono specially commissioned by WAM from Chiso, the prestigious 465-year-old Kyoto-based garment maker known for their remarkable couture designs, which exemplify their centuries-long commitment to innovation, beauty, and versatility. The Kimono in Print: 300 Years of Japanese Design opens at WAM on February 6, 2021 and runs through May 2, 2021. The Kimono in Print will be accompanied by a virtual exhibition on the Museum's website, Kimono Couture: The Beauty of Chiso, exploring the hidden world of traditional kimono design and artistry still practiced by Chiso.

“At a time when segments of the fashion world are very focused on being ‘fast,’ it is gratifying to see an exhibition that tracks the slow but steady evolution of kimono design,” said Matthias Waschek, the Jean and Myles McDonough Director of the Worcester Art Museum. “Prints have been an essential Japanese art form since the 17th century, valued by audiences at many different levels of wealth and education. Our exhibition will help audiences understand more of the rich material and design culture of Japan, through a special look at the kimono, a distinctive form of Japanese clothing and an emblem of artistry and design in its own right. We are especially grateful to Chiso for the opportunity to commission a unique wedding kimono for our collection, an enduring work of art.” 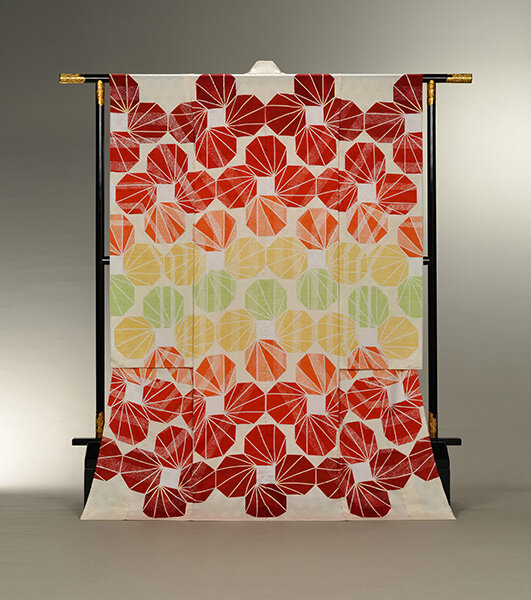 Over the course of three hundred years, Japanese print artists documented ever-evolving trends in fashion, popularized certain styles of dress, and even designed kimonos. The Kimono in Print presents the dialogue between print and kimono design through approximately 70 Japanese prints, as well as a selection of illustrated woodblock printed books and paintings. The exhibition begins with early prints from the late 17th century, when a more complex and sophisticated attitude towards clothing first appeared, as seen in the elaborate kimono worn by celebrity kabuki actors and courtesans of the Edo (present-day Tokyo) pleasure quarters. Modern design books and prints from the early 20th century, inspired by or made for kimonos, will demonstrate how the boundaries between print and textile fashion and design became more fluid.

As an article of clothing, the overall shape and form of the kimono has changed little since the14th century. While European and American clothing styles have transformed dramatically over the centuries in form, color, and style, the evolution of the kimono has been driven instead by the dynamic and innovative expression of surface design and technique. For example, kimono pattern books dating to the 17th century show how consistent the kimono form has been through to the present moment—while also revealing the evolving history of how each garment was decorated through often dramatic compositions, whether painted, dyed, or embroidered. These bold designs, along with fashionable wearers’ skillful layering of contrasting patterns and colors, appealed to print designers. Large areas of an image in illustrated books and prints were often given over to the print artist’s opulent designs of the kimono’s intricate patterns. As full-color prints were popularized, the artistry expanded, with the works being called nishiki-e, or “brocade pictures,” after the celebrated brocade fabrics of Kyoto. Among the earliest works in the exhibition are a number of different textile pattern books by or attributed to Hishikawa Moronobu (1618–94), dating to the 1680s. These woodblock-printed books, such as Kimono in a Looking Glass (Kosode no sugatami) from 1682, were popular for their imaginative depictions of people and designs, but also served as the illustrated catalogs for potential buyers to select fabrics, patterns, and adornments in vogue for their own kimonos. The sumptuous kimono designs that appear on the left-hand pages of Kimono in a Looking Glass follow the diagonal sweeping Kanbun style popular at the time the book was published, while figures of women and young men on the right-side pages serve as models to help the reader visualize themselves in the latest fashions. Similarly, Moronobu’s Mirror of Patterns of the Four Seasons for Various Activities (Shiki moyō shorei e-kagami), from the early 1680s, shows kimonos appropriate for each season. In one page spread, two kimono designs on facing pages represent winter and spring—in the kimono on the right-hand a sinuous arare (“hail”) character along the hem of the kimono contrasts with the two large snowflakes on the shoulder. In the kimono on the left-hand wisteria appears behind the Noda character referring to Noda in Osaka, which is famous for viewing wisteria in the late spring.

Two centuries later, these motifs began to be part of Japan’s modernization. The Collection of Weaving Designs (Shokumon ruisan) (1892–93) by an unknown artist includes more than one thousand woven textile patterns grouped according to subject type, such as celestial, animal, floral, and plant. Assembled by the Imperial Museum in Tokyo (today the Tokyo National Museum), the often brightly colored prints reflect related interests in this period both to codify a national visual identity and to create an archive to inspire modern art and design. Similarly, Tsuda Seifū’s (1880–1978) Spirals (Kamonfu) (1900), was the debut work of the then-twenty-year old artist. It reflects the enormously inventive milieu of Kyoto in the late nineteenth and early twentieth centuries, as traditional approaches to kimono-making confronted industrialization and modernization. Seifū’s bold, saturated palette, as well as the striking use of repetition, organic and flowing lines, and rich patterning, references Art Nouveau, which influenced Japanese arts and crafts at this time. 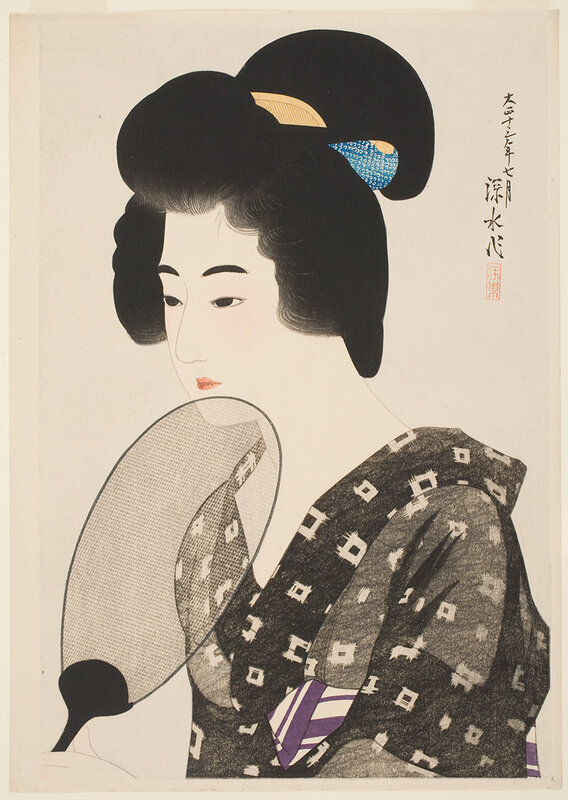 Displayed at the center of the exhibition will be the wedding kimono created by Chiso, bringing into vivid reality the design sensibility so evident in the surrounding prints. For this commissioned work, Chiso’s head senior designer Imai Atsuhiro drew upon the landscapes of both Japan and New England, specifically the “Seven Hills of Worcester”—which is reflected in the seven advanced textile techniques, as well as the seven gradations of color used in the kimono. Inspired by the lyrical fall Japanese and New England foliage that are both dominated by brilliant maple leaves, the design incorporates a maple leaf motif rendered as an octagon—a reference also to Chiso’s octagonal company trademark—which creates a rich pattern that covers the entire kimono surface. Seven large concentric octagons also superimpose over the pattern, one of which is only apparent when the kimono is closed in the front. When the kimono is worn, the two halves of this concentric octagon come together in the front to form one complete octagon, visually and poetically uniting Chiso and Worcester in a marriage of friendship between the two institutions. The presentation of this commissioned work will be supplemented with videos and photography—in an accompanying virtual exhibition on the Museum's website—demonstrating the seven advanced textile techniques used in the kimono by Chiso, both endangered techniques as well as those newly invented, including: paste-resist yūzen dyeing, colored flour paste-resist dyeing (iro utsushi itchin yūzen), gold leaf, embroidery, and wax-resist dyeing. 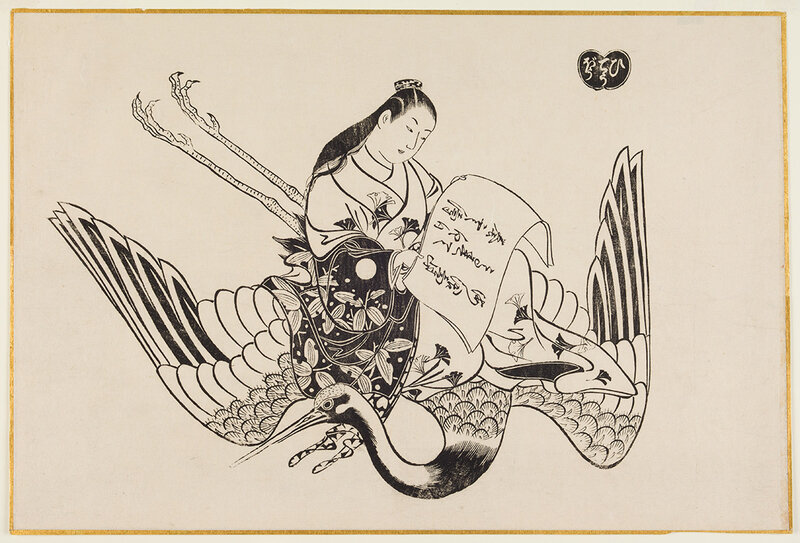