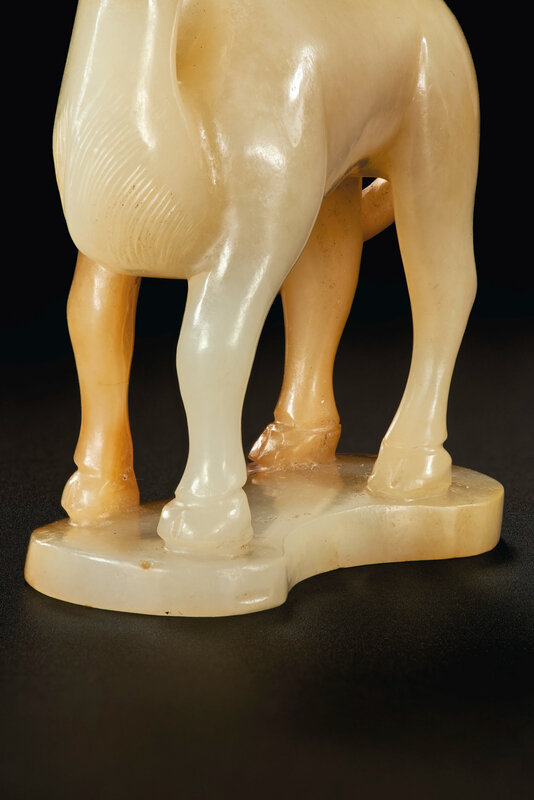 The figure is shown standing on a flat, waisted base. The details of the tapering head are well carved, as are the hair markings on the top of the head, lower neck, tip of the tail and the two humps, which lean in opposite directions. The luminous stone of warm white color deepens to be a pale yellowish-brown color on one side, which imbues the whitish stone with its warm tone, cloth box.

Note: Although diminutive in size, this exquisite jade camel is exceptional for the sensitive and naturalistic rendering, the masterful workmanship and the high quality of the jade material. Its depiction standing is also extremely rare, as most jade camels of early date are shown recumbent.

While camels in Chinese art are inexorably linked with Tang China, they did also enjoy popularity under the Mongols of the Yuan dynasty. Chi Ju-hsin, in her essay, ‘A social and cultural approach to dating Chinese Jades: Two examples from the Cissy and Robert Tang collection’, included in Jenny F. So’s publication, Chinese Jades from the Cissy and Robert Tang Collection, Hong Kong, 2015, pp. 242-5, makes the observation that in Chinese history it was really only during the Tang and Yuan periods that people had the opportunity to observe camels firsthand and thus were able to portray them faithfully and naturalistically. While a Tang-Yuan dynasty dating has been ascribed to the Junkunc jade camel, the high quality of the material and the workmanship point more towards a Tang-dynasty date.

Only one other jade figure of a standing camel of this miniature size appears to be recorded: the one in the Tianjin Museum, dated Tang dynasty and measuring 6.3 cm. high, illustrated in Jade Wares Collection by Tianjin Museum, Beijing, 2012, p. 137, no. 119. (Fig. 1) The Tianjin camel and the Junkunc camel are quite similar, including the shaped base and the two humps flopped in opposite directions. The hair markings on the Tianjin figure, however, appear to be rendered with broader cuts, and are not as finely executed as on the Junkunc figure. Most published small jade figures of camels are shown recumbent. One such jade figure, dated Tang or Yuan dynasty, 8th-14th century, is illustrated by Jenny F. So, Chinese Jades from the Cissy and Robert Tang Collection, op. cit., pp. 174-75, no. 35. It is shown seated with its head facing forward and the legs folded and tucked on either side of the body. The back legs are correctly shown bent back under the body, not folded forward as they would be with most animals, such as the example in the Museum of Far Easter Antiquities, illustrated by J. Rawson, Chinese Jades through the Ages, Victoria and Albert Museum, London, 1975, no. 249, where it is dated Song dynasty, or the two jade camels illustrated by James C. Y. Watt, Chinese Jades from Han to Ch’ing, The Asia Society, New York, 1980, pp. 61-62, nos. 40 and 41, both of which are dated Tang dynasty.

During the Tang dynasty, most figures of standing camels were made of pottery and were usually of large size, such as the chestnut and straw-glazed figure sold at Christie’s New York, 22 March 2007, lot 267. As with the present jade figure, the pottery camel is shown standing foursquare on a base, has hair markings, and the humps are realistically depicted. Pottery depictions of camels in a diminutive size, however, were also produced. One such miniature (3 ½ in. high) is the blue, amber and white-glazed example of Tang dynasty date from the Falk Collection, sold at Christie’s New York, 1 October 2001, lot 15. (Fig. 2)