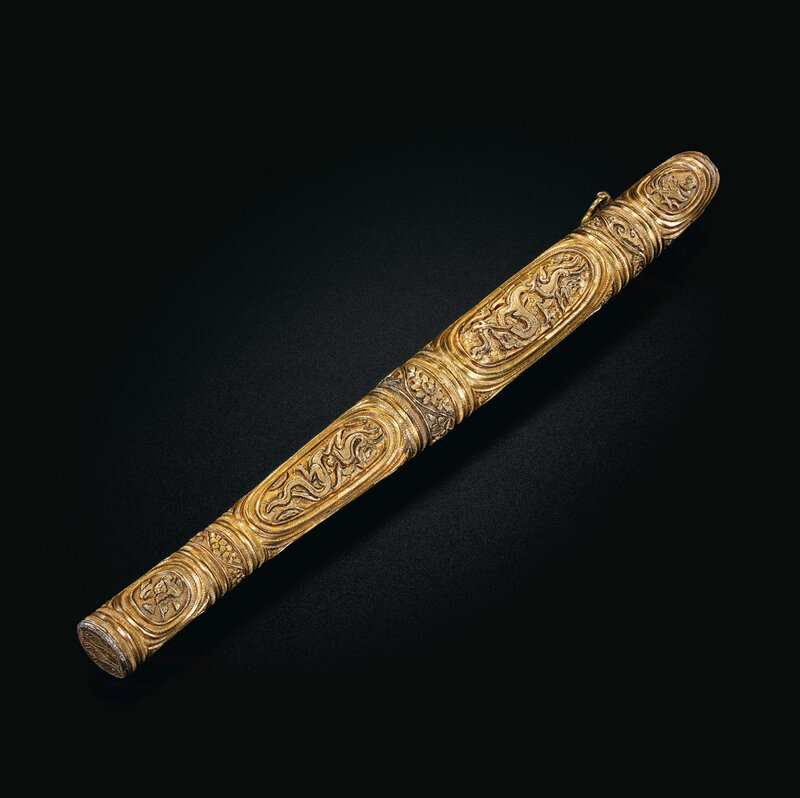 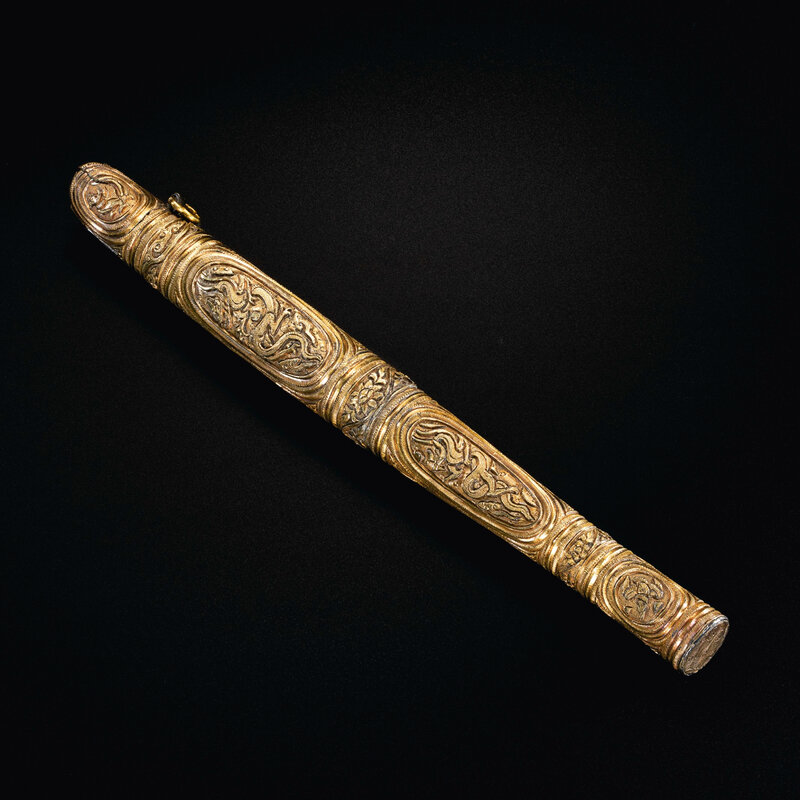 The tapering, tubular sheath of oval section is finely decorated on each side with oval panels: the bottom panels with mandarin ducks in flight; the larger middle panels, of two different sizes, with writhing, three-clawed dragons with ring-punched scales, two of them chasing a flaming pearl, all on a wave ground; and the uppermost panels, which are separated by a slit on one side, with phoenixes, all within borders of fine, narrow petals and separated by bands of flower and foliate scroll. Only the dragon panels have a wave ground, all of the others and the narrow foliate bands have a fine ring-matted ground. The flat bottom is engraved with two fish amidst waves. The upper section has a small trefoil-shaped ring soldered to the side opposite the slit. The sheath is lined, cloth box.

Note: The decoration on this rare sheath is very unusual. The dragons, with their fierce demeanor and contorted, twisting movements, appear to be related to those seen on metalwork, such as bronze mirrors, gold and silver-gilt vessels and personal ornaments of Tang, Liao and Song date. Jenny. F. So in Chinese Jades from the Cissy and Robert Tang Collection, Art Museum, The Chinese University of Hong Kong, 2015, illustrates, p. 156, fig. 29.2, a detail of a such a dragon that decorates a gilt-silver box from the tomb of Liao Princess Chen (d. 1018), and notes that these types of dragons were "applied to metalwork with imperial associations." The features, including the muzzle, open jaws, three-clawed feet and scaly body seen on the Liao dragon are quite similar to those of the dragons on the present object. The author also discusses similar dragons on small jade articles and belt plaques of 10th and 11th century date, including a jade belt plaque from the tomb of Wang Jian (buried AD 918) in Chengdu, Sichuan province, p. 157, fig. 29.3.

Also typical of Liao metalwork is the use of ring-matting. This can be seen as the background on a number of pieces illustrated by Jenny. F. So, Noble Riders from Pines and Deserts: The Artistic Legacy of the Qidan, Art Museum, The Chinese University of Hong Kong, 2004, including several gold and gilt-silver bracelets, pp. 166-71, pls. IV:9, IV:10 and IV:11; a set of gilt-silver belt ornaments, pp. 210-13, pl. V:6; and a small gilt-silver cylindrical container with honeysuckle scroll decoration that would have been suspended from a belt, pp. 230-31, pl. V:15 (B). It can also be seen to indicate the scales of a dragon shown leaping against a ground of waves that decorates the gold cover of an inkstone, pp. 364-65, pl. VII:31. Further similar dragons on a wave ground, some shown chasing a flaming pearl, decorate the five, graduated silver-gilt plaques of a belt or waist brace, illustrated pp. 206-07, pl. V:4. The author notes, p. 208, that the Qidan adopted the dragon, a traditional Chinese imperial symbol, after coming into contact with the Chinese and reserved its use for "members of the Qidan ruling family."