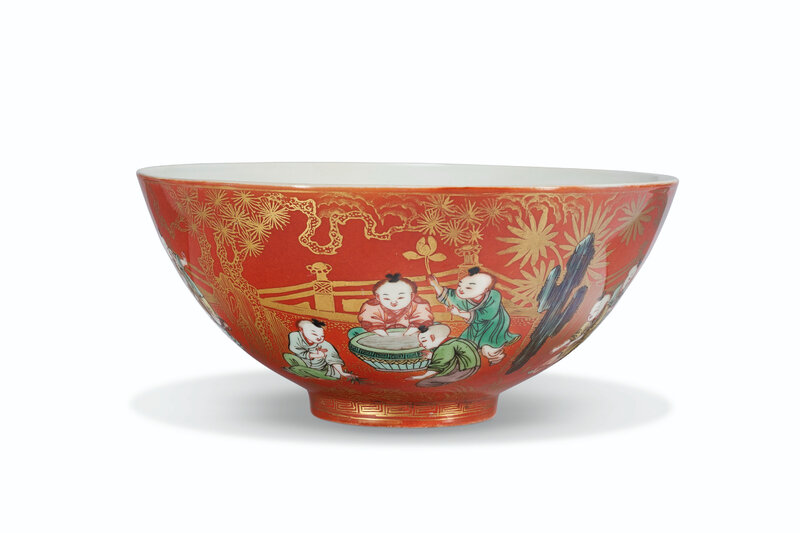 The bowl is decorated with enamels and gilt on a coral-red ground, with four groups of four boys, some playing with a squirrel and others engaged in different leisurely pursuits, beside rocks and plantain on a continuous fenced garden terrace.

Note: The elaborate and highly amusing design on the present bowl is based on earlier Ming prototypes of children gathered in groups playing in a landscaped garden. The earliest known representation of this motif can be seen on a Yongle blue and white bowl exhibited at the Hong Kong Museum of Art, Chinese Porcelain, The S.C. Ko Tianminlou Collection, Hong Kong, 1987, illustrated in the Catalogue, no. 15.

The deep, coral enamel used as the ground was an innovation of the Qing dynasty, when new enamel colors became available. A pair of coral-ground ‘boys’ bowls, also with Kangxi marks and of the period, but more densely decorated with boys and leaving less space for the rich coral ground, is illustrated by G. Hasebe, Qing Ceramics from Seikado; The Beauty of Jingdezhen Imperial Kiln, Tokyo, 2006, p. 37, no. 27. In the present design, the smaller groups of boys allow for more space and rhythm in the design, and the gilt detailing gives an added richness to this new palette.

Although seemingly rare in the Kangxi period, the design continued through the 18th century and achieved particular popularity during the Jiaqing period, from which numerous examples survive. A pair of bowls with identical design but from the Qianlong period is illustrated in Chinese Ceramics in the Idemitsu Collection, Japan, 1987, pl. 952. Jiaqing examples include a bowl in the Palace Museum, Beijing, illustrated in The Complete Collection of Treasures of the Palace Museum – 38 – Porcelains in Polychrome and Contrasting Colours, Hong Kong, 1999, pp. 173-74, pl. 159.

The present bowl appears to be the second Kangxi-marked example to come to auction in recent years. One Kangxi-marked bowl from the collection of Soame Jenyns, the Assistant Keeper of Oriental Antiquities at the British Museum, was sold at Christie’s London, 6 November 2018, lot 36. 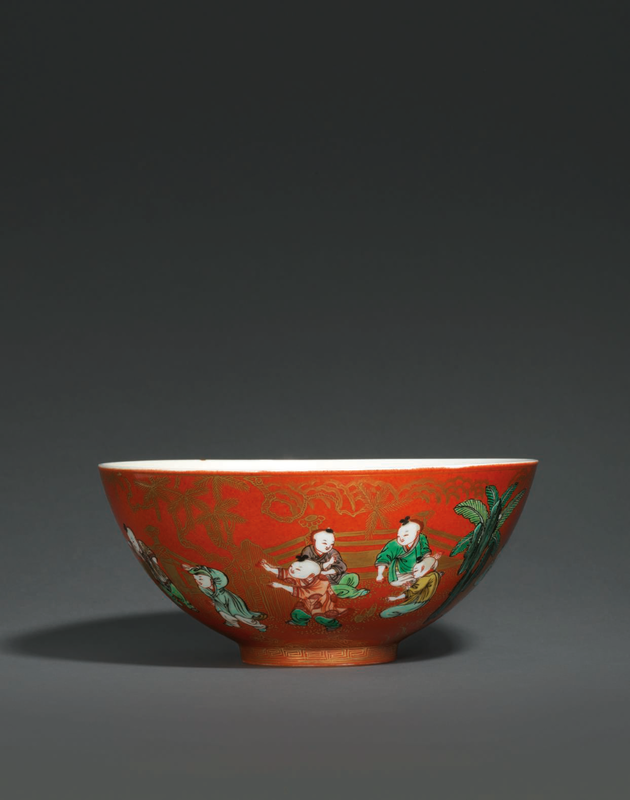