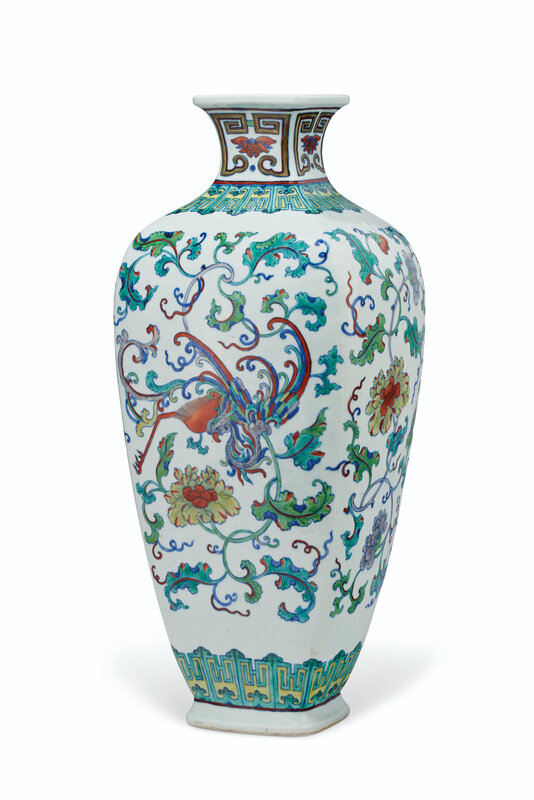 The rectangular vase with broad, rounded shoulders is decorated on the front and back in bright enamels with a phoenix in flight above a peony blossom borne on leafy tendrils. The narrow sides are decorated with further peony blooms on leafy stems, all between two stylized lappet bands, and on the neck with lotus blooms within squared scroll borders.

Note: The present vase is unusual for its faceted form, large size and its choice of decoration. The doucai technique was highly renowned in the Chenghua period, when it was mostly used on smaller wares, such as the legendary ‘chicken’ cup. However the revival of the technique in the eighteenth century also saw the use of doucai enamels on much larger wares, such as large ‘dragon’ dishes, and the present vase which is decorated with phoenixes.

The choice to decorate the present vase with two phoenixes, rather than a phoenix and a dragon, is also unusual. A related, slightly smaller, doucai meiping (43.5 cm. high), decorated with a dragon and phoenix amidst foliate scroll, dated to the Yongzheng period, is illustrated in The Prime Cultural Relics Collected by the Shenyang Imperial Palace Museum; The Chinaware Volume The First Part, Shenyang, 2008, p. 218, no. 6. A related doucai meiping of the same size and similar design to the Shenyang meiping, but with a cover, dated to the Qianlong period and in the Qing Court Collection, is illustrated in Porcelains in Polychrome and Contrasting Colours - 38 - The Complete Collection of Treasures of the Palace Museum, Hong Kong, 1999, p. 259, no. 237.