A magnificent imperial famille rose charger, Yongzheng six-character mark and of the period (1723-1735)

A magnificent imperial famille rose charger, Yongzheng six-character mark and of the period (1723-1735) 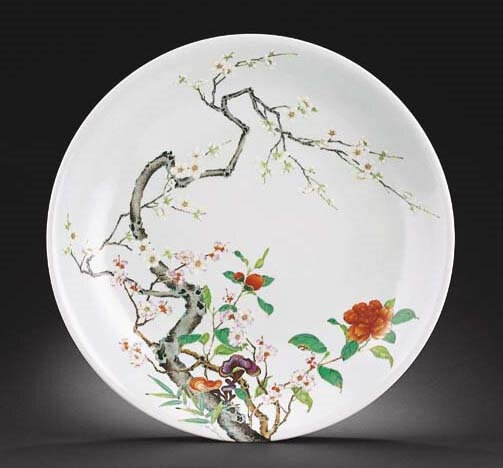 The large dish finely enamelled on the interior with two branches, the larger gnarled branch issuing white flowering prunus and extending around the curve of the dish, entwined with a smaller pink-flowering peach branch detailed with iron-red sepals, growing beside a large iron-red camellia blossom and bud, with finely shaded leaves browning at the tips, amidst bamboo and colourful lingzhi sprigs, all continuing onto the underside with the camellia and peach extending in one direction around the sides, and the prunus in the opposite direction, box.

Literature: The Collection of Chinese and Other Far Eastern Art Assembled by Yamanaka & Co., New York, 1943, no. 588 (right).

The present charger belongs to a group of Yongzheng dishes, all of similar large size, exquisitely painted with flowering or fruiting branches rising from the foot and turning over the mouth rim onto the interior. Their large size and exacting designs made them difficult to produce successfully, so only a small number was made during the Yongzheng period, with none from the Qianlong period known.

These dishes were all individually conceived, using different flowers and with variations in their arrangement, but the general concept remains unchanged. This style of decoration, which brought the flowering branch over the rim of a dish or bowl, is known as guozhihua, 'flowering branch passing over (the rim)' and was first developed in the latter years of the Ming dynasty in the second quarter of the seventeenth century. However, it was not until the Qing dynasty that this style of decoration seems to have gained popularity and specifically, imperial favour. It was in the Yongzheng period that the guozhihua style of decoration reached its peak, in terms of both accomplished execution and also of popularity at court, with finely enamelled vessels of both large and small size decorated in this technique.

A Yongzheng dish in the Palace Museum, Beijing, enamelled with the same flowers arranged in mirror image, is illustrated in Kangxi Yongzheng Qianlong, Hong Kong, 1989, p. 222, pl. 51; one in the Shanghai Museum, published in Chugoku toji zenshu, vol. 21, Kyoto, 1981, pl. 88; an example decorated with flowering and fruiting peach and tree peony from the Percival David Foundation, London, is illustrated by Rosemary Scott, Imperial Taste, Chinese Ceramics from the Percival David Foundation, San Francisco, 1989, no. 52; one from the Walters Art Gallery, Baltimore, is illustrated by S. W. Bushell, Oriental Ceramic Art, London, 1981, col. pl. XLVIII; and another from the Su Lin An Collection, was sold at Sotheby's Hong Kong, 31 October 1995, lot 329.