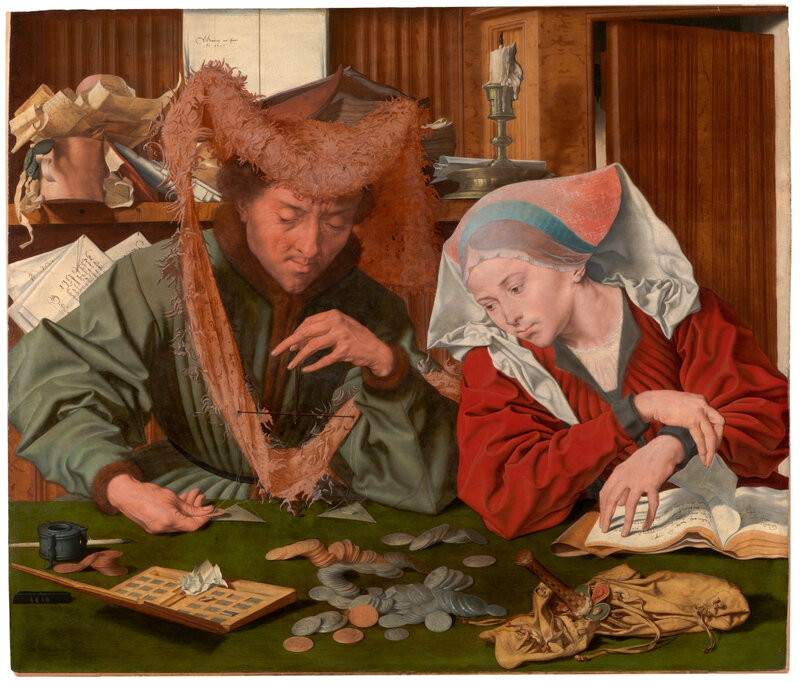 MADRID.- The aim of this exhibition, which is benefiting from the sponsorship of Mitsubishi Corporation and the Fundación Amigos del Museo del Prado, is to introduce visitors to Marinus van Reymerswale, a Netherlandish artist who worked in the first half of the 16th century. As the exhibition’s curator Christine Seidel has explained: “Following their restoration, the paintings have returned to life with renewed splendour. New technical research, undertaken by the Museo Nacional del Prado, has contributed important information on the conditions and methods of production of his paintings in the emerging art market in Antwerp and in the context of the material culture of his day”.

The exhibition brings together 10 works by the artist, five from the collection of the Museo del Prado and 5 from other institutions including the Museo Nacional Thyssen-Bornemisza and the Real Academia de Bellas Artes de San Fernando in Madrid and the Fine Arts Museum in Ghent. Two are particularly relevant as they have never previously been exhibited in Spain: the two versions of The Tax Collectors from the Hermitage and the Musée du Louvre, which depict the second popular subject in Marinus’s oeuvre, a body of work that focuses on the world of finance. Books, prints and coins from the outstanding collections of the Biblioteca Nacional and the Museo Arqueológico Nacional in Madrid add context to the painter’s images and reveal his working practice. Marinus van Reymerswale (ca. 1489 - ca. 1546/56), whose surname derives from a city in the province of Zeeland located in the southwest of the modern-day Low Countries, based his artistic practice on the repetition of a small number of scenes: tax collectors, the so-called “money changers”, various versions of Saint Jerome in his study, a number of New Testament scenes and a Virgin and Child. In some cases these compositions may have been inspired by models by other artists such as Quinten Massys and Albrecht Dürer, but Marinus transformed them and created his own designs of striking originality.

The bindings of many of the books and the coins that appear in Marinus’s works reveal the artist’s remarkable technical ability to reproduce material elements and he filled his interiors with real objects to be found in his everyday environment. The figures’ eccentric clothing, however, moves his scenes away from the world of his contemporaries and gives them a theatrical character.

Marinus’s output includes numerous versions of a single version but with changes to the small details, possibly intended to achieve the uniqueness required by the client. In order to show the differences between the two known versions of The Money Changer and his Wife in the Museo del Prado, an interactive digital resource is available here.

These variants on a single theme raise a series of questions relating to the painter’s practices and the resources he employed to facilitate the production of his work, creating some uncertainty regarding attributions and giving rise to the use of a group of terms such as “studio of”, “circle of” and “follower of”. Marinus’s paintings play with elements employed by the financial world of the day to present and distinguish itself from other sectors of the middle class. The first paintings by the artist for which documentary information exists were among those owned by financial administrators. In 1604, for example, Karel van Mander, the first Dutch art historian, wrote that a work by the artist hung in the Middelburg office of Melchior Wintgis, the master of the Zeeland mint. By the 17th century others were present in international ducal and royal collections.

In the late 16th century and during the 17th century many of the artistic motifs that Marinus employed became dissociated from the financial professions and acquired a more negative reading. This moralising interpretation is also present in the artist’s work. However, it can be asked whether his paintings, which were aimed at a specific public, should solely be read in a negative manner or if distinctions exist that were generated by clients, conditions of production and changes of paradigm. 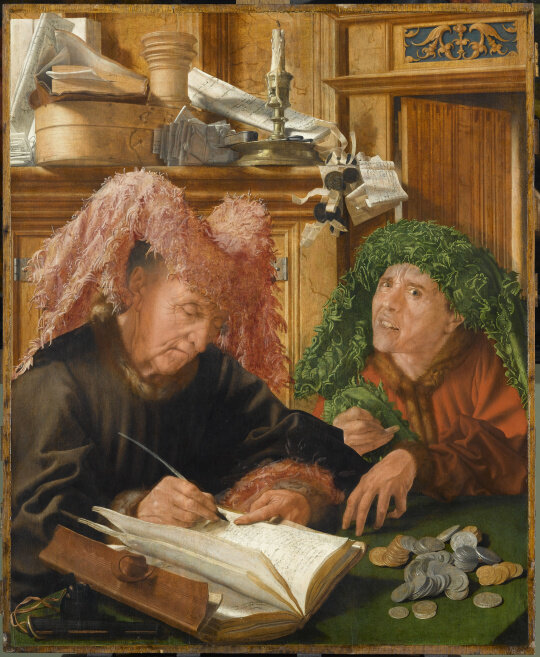 It may be due to the supposed proximity of Marinus’s paintings to the emergence of the pre-modern economy that their depiction of the world of finance continues to be of interest today. The connection between the artist’s compositions and this world has been researched by a range of historians, both from the perspective of economic history and that of the history of art. In the 20th century Marinus’s paintings were often used to illustrate texts on European economic history and the history of coins. The Flemish economic historian Raymond de Roover (1904-1972) was one of the first to associate money changers with the profession of banking in the 16th century and to illustrate it in his book Money, Banking and Credit in Medieval Bruges. Italian Merchant Bankers, Lombards and Money Changers: A Study in the Origins of Banking (Cambridge Mass., 1948).

This modern gaze on the artist’s paintings also reveals that he paid close attention to depicting the particular characteristics of the financial market of his day. In 1979 in Spain the Association of Accounting and Company Administration chose the man in the artist’s painting in the Museo del Prado for its logotype, thus acknowledging that this is an image of economic activity in the Renaissance period.

In 1999 a stamp was issued with the Prado’s money changer painting on the occasion of the international Conference of the Museology of Money. In the early 17th century Antwerp became a flourishing artistic and mercantile centre, attracting travellers, merchants and craftsmen from across Europe. Its commercial networks developed rapidly and artists played an important role in that emerging international market. New pictorial subjects alongside innovative methods of production and collaboration between painters transformed this northern city into a productive artistic centre. Marinus (ca. 1489 - ca. 1546/56), the enigmatic painter from Reymerswale, a city in the province of Zeeland in the modern-day Low Countries, was one of the first to adapt himself to a growing demand for paintings on subjects that were both innovative and popular.

A contemporary of Quinten Massys, Marinus began his career in Antwerp and returned to Reymerswale before 1531. After the Saint Felix flood which devastated the city in 1530 he was commissioned to produce a map of the region for Mary of Hungary, governor of the Low Countries. The artist moved to Goes around 1540 and probably died there between 1546 and 1556.

Marinus specialised in a limited number of subjects. His images of Saint Jerome, which are the most numerous within his oeuvre, are inspired by works by Dürer who had visited Antwerp in 1521. His genre scenes, which principally relate to the world of commerce and finance, have often been interpreted as the representation of sinful human behaviour. However, the artist introduced contemporary elements into these
works which reflect the economic changes of the day and which seem to question the traditionally negative vision of the characters depicted in them. In the first half of the 16th century pre-modern financial structures developed rapidly and transformed European society. In the early modern age, money trading became a key factor of prosperity and progress although this practice was condemned by the Church and was strongly criticised in moralising and satirical texts. By Marinus’s day the regulation of financial transactions had already evolved towards complex administrative structures controlled by civil servants.

Money changers, who had existed since the 13th century, soon became the symbol of usury and covetousness. Extravagant or old-fashioned clothes, such as the headdresses to be seen in Marinus’s works, were often used to identify them. In his works the artist combined these bizarre garments, which look back to an earlier tradition, with contemporary elements such as coins and inscriptions on fiscal and legal matters. He thus transformed images considered to be depictions of negative and sinful behavioural practices into works that also reflect the changes taking place in the dynamic financial market of his day.

In the 15th century, the gold coins issued by Spanish and French monarchs were among the most valuable. Silver coins were introduced on a large scale following the start of the exploitation of the mines in Saxony followed by those in Potosí. The exhibition includes the first silver coin issued by Charles V in the Netherlandish provinces. Its presence in the painting of The Tax Collector and his Wife reflects the growing importance that this prized metal acquired over the course of the 16th century. 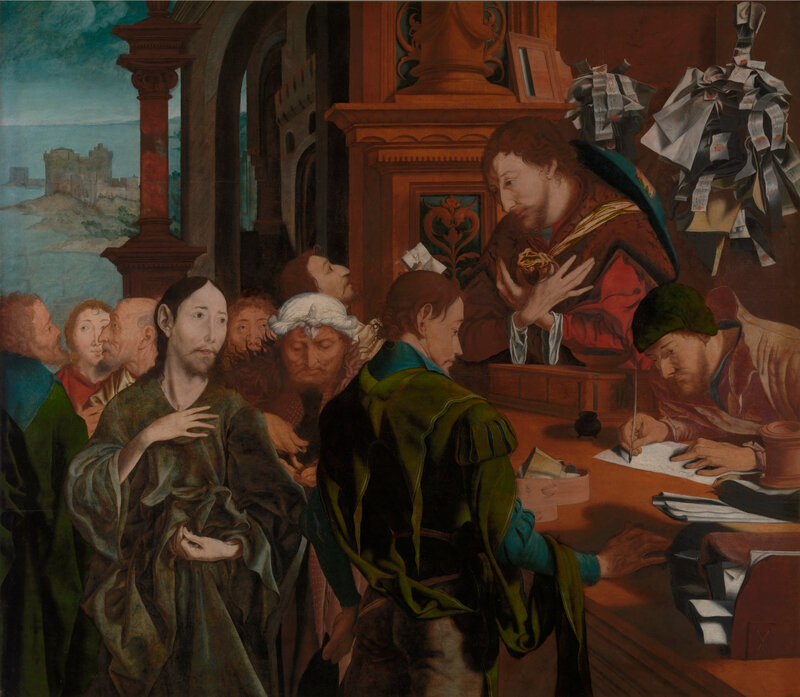 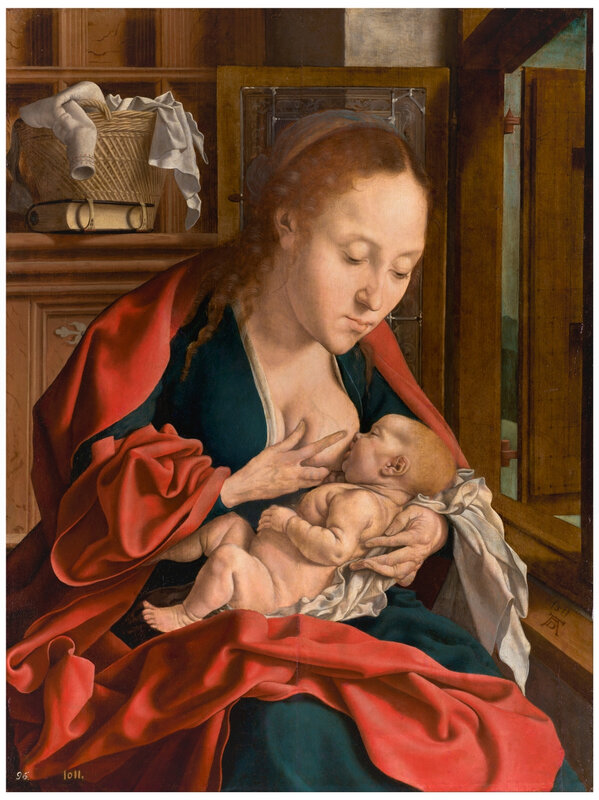