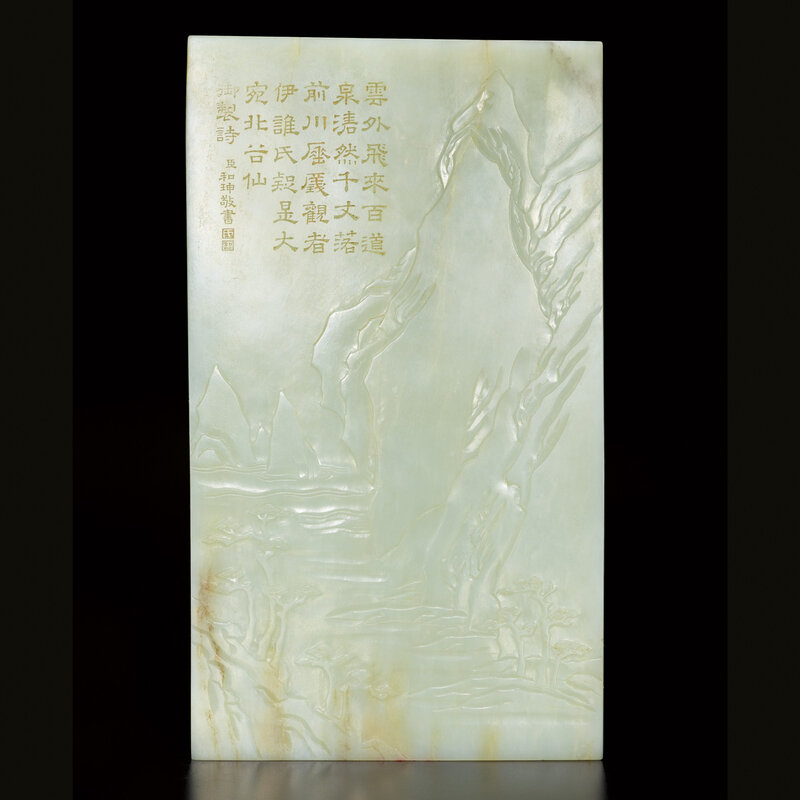 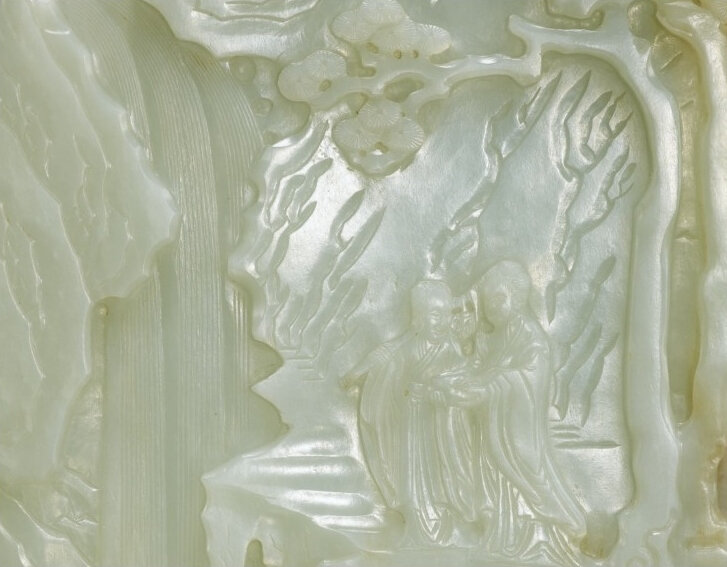 of vertical rectangular form, skillfully carved in several layers of relief on one side with two scholars standing on a rocky outcrop beneath a gnarled pine tree all set within a vertiginous mountain landscape of craggy peaks and ravines, a waterfall coursing between the distant summits before cascading down the steep rock face in the middle-distance, roiling clouds in the sky above, the verso carved in low relief with a river estuary with steep rockwork rising to one side, the top left corner with a twenty-eight character poem Yuzhi gaoshi linquan shi (scholars by the waterfall) incised and gilt, following by the inscriptions Yuzhi ti and He Shen jingshu (respectfully written by He Shen).

'A hundred streams flying from beyond the clouds, Traveling thunderously for thousands of miles and falling into the river in front' - EMPEROR QIANLONG, 1764

nscribed with a poem composed by the Qianlong Emperor (r. 1736-95), this table screen is significant not only for its imperial association, but also for the name engraved in the complimentary close – He Shen (1750-99). The inscription can be translated as:

A hundred streams flying from beyond the clouds

He who watches this lofty marvel is

Perhaps the celestial Beigu of Dayuan

Imperial Poem respectfully written by the Emperor's subject He Shen

Composed by the Emperor in 1764, the poem is included in Qing Gaozong yuzhi shiwen quanji [Anthology of Imperial Qianlong poems and texts], Yuzhi shi san ji [Imperial poetry, vol. 3], juan 40, under the heading of Ti Hetian yu gaoshi linquan [Composed for the Khotan jade ‘Scholars Listening to a Flowing Spring’] (fig. 1). The Beigu of Dayuan referred in the verse is an immortal from the western part of China, potentially alluding to the source of the jade material celebrated by the Emperor. He Shen, arguably the favorite minister of the Emperor, was one of the most powerful political figures in the Qianlong reign, who held many high-ranking posts at court. During his career, he amassed tremendous property and treasures including an abundance of gold, silver, jades and pearls. The current jade screen was most likely a commission by this man of supreme wealth, who might have presented it to the Emperor as a tribute to demonstrate his loyalty. The Qianlong Emperor was a well-known jade lover. Jade craftsmanship during his reign is widely regarded as its peak of development. According to official records, he regularly inspected the jade carving process to make sure products were up to standards. With the Qing court’s expansion of territory in western China in the mid-18th century, there was an increased supply of jade material from Xinjiang province, particularly from the renowned jade-rich region of Khotan (Hetian). Highly skilled jade artisans worked at workshops both inside and outside of the palace, for example, in cities such as Suzhou and Yangzhou, creating a wide range of jade items of unprecedented quantity.

From the hundreds of poems and essays he had written about jade, it is possible to get a sense of the Emperor’s taste. Khotan jade, for example, was highly prized by the Emperor who on several occasions expressed his admiration for this treasured stone. In terms of style, he was particularly fond of jade designs inspired by antiquities and paintings. The latter, typically with depictions of figures and landscapes, aim to create a visual effect similar to that of paintings, but in a three-dimensional form by carving the stone in relief on varying levels. Like on paintings, verses were sometimes inscribed on jades to accompany pictorial representations.

A jade mountain, carved with two scholars standing by a waterfall, bears the same poem. It is in the collection of the National Palace Museum, Taipei (accession no. 故-玉-003848), and included in the Museum’s exhibition The Refined Taste of the Emperor: Special Exhibition of Archaic and Pictorial Jades of the Ch’ing Court, Taipei, 1997, cat. no. 41 (fig. 2). The Emperor’s poems are often found inscribed on more than one work. 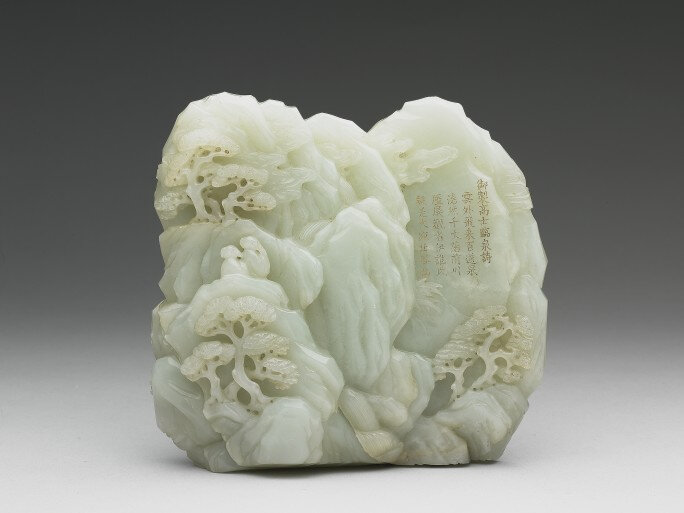 Compare two smaller white jade table screens, each depicting a scholar appreciating a landscape, carved in low relief and inscribed with an imperial poem followed by the phrase chen Wang Jie jingshu (respectfully written by the Emperor's subject Wang Jie), one in the Summer Palace, Beijing, published in Compendium of the Cultural Relics in the Collection of the Summer Palace, Beijing, 2018, p. 50-1; the other sold in our Hong Kong rooms, 8th April 2010, lot 1907. See also a smaller white jade screen from the De An Tang Collection, with a woodcutter and fisherman in a landscape, inscribed with two imperial poems and the name of the official Jueluo Guifang, included in the exhibition, A Romance of Jade: From the De An Tang Collection, Palace Museum, Beijing, 2004, cat. no. 62.