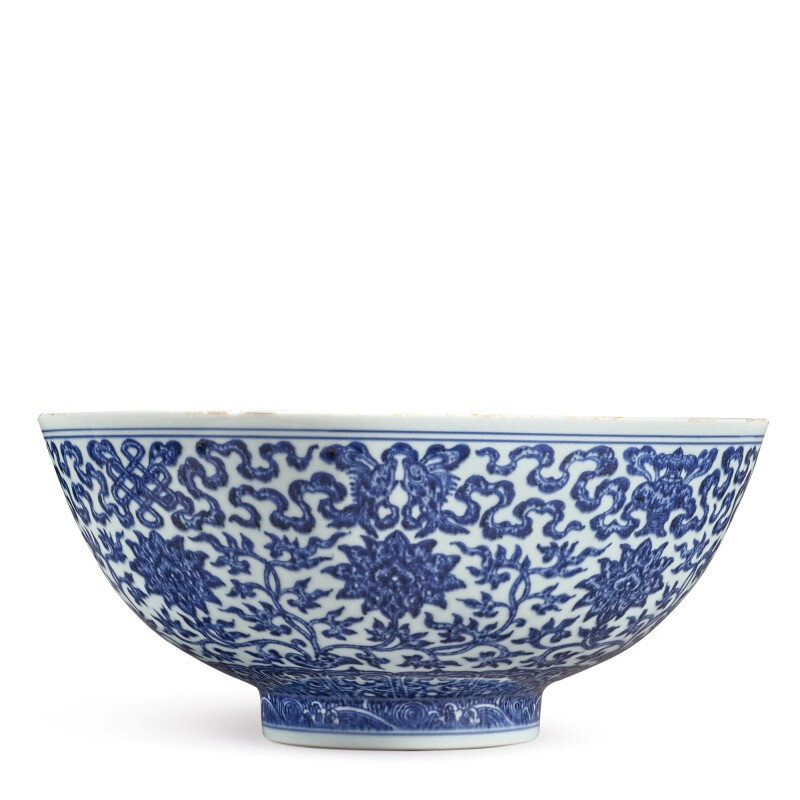 the deep rounded sides resting on a straight foot, finely painted in 'heaped and piled' cobalt blue tones, with a band of beribboned 'Eight Buddhist Emblems' above a stylized lotus scroll and upright ruyi lappets, all between double-line borders at the rim and a wave border encircling the foot, the interior rim painted with a further border of crashing waves, the center with a beribboned double-vajra medallion, the base with a six-character seal mark in underglaze blue.

Provenance: Bluett & Sons Ltd., London.
Canadian Private Collection, acquired from the above between the 1960s and 1980s, and thence by descent.

Note: Brilliantly painted, the distinctive mottled 'heaped and piled' effect of classic Ming dynasty blue and white wares has been successfully simulated through the deliberate application of darker and thicker spots of cobalt on the present bowl. Echoing the Qianlong Emperor's penchant for classicism and innovation, the bowl is elegantly decorated with the bajixiang and lotus, revisiting and reinterpreting early Ming designs like the Xuande bowl illustrated in The Complete Collection of Treasures of the Palace Museum: Blue and White Porcelain with Underglazed Red (I), vol. 34, Hong Kong, 2000, pl. 147.