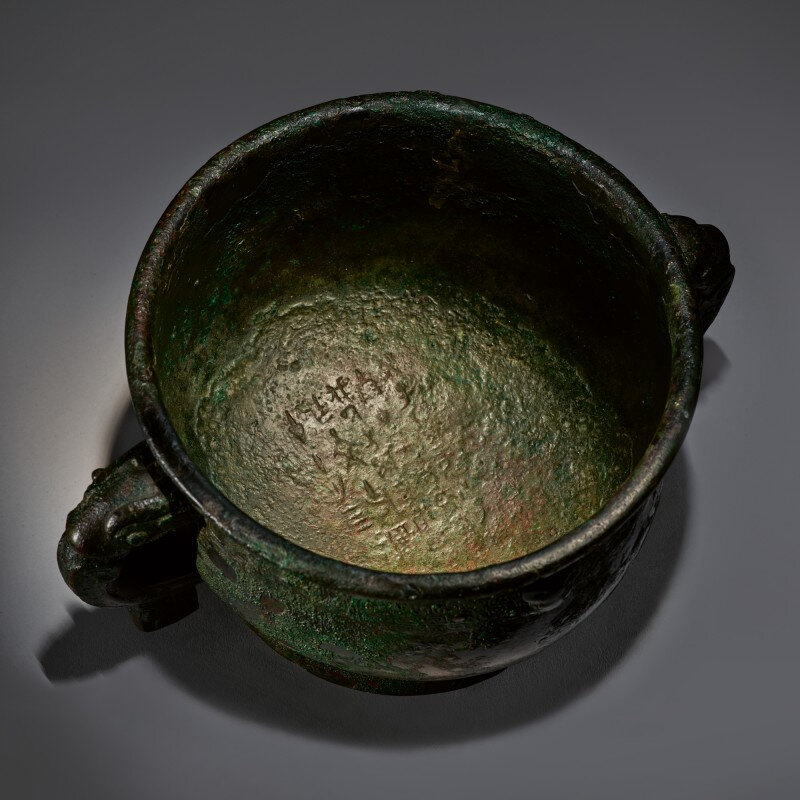 finely cast below the rim with a kuilong band centered by beast masks and interrupted by a pair of loop handles with pendent tabs, the foot with a further kuilong band, the interior cast with an inscription translating to ‘On the guisi day Hua rewarded Xiaozi X ten peng of cowries at ShangX. It was that he had been ordered to mount a military campaign against X of Yifang. He used it to make this sacrificial vessel to honour Father Ding. At the fourteenth month, ju’.

The Institute of Archaeology, Chinese Academy of Social Sciences, Yinzhou jinwen jicheng[Compendium of Yin and Zhou bronze inscriptions], Beijing, 2007, no. 04138.

Wei Xinying, 'War against Yifang in the 15th Year of Dixin's Reign Recorded on Late Shang Bronzes in Overseas Collections', Journal of National Museum of China, Beijing, 2015, no. 3, fig. 5-1 and fig. 6.

he Shang period (c. 1600 - 1045 BC) is China’s first historic dynasty, that is, the first era from which written documents are preserved that corroborate the period’s historicity. Such documentation is known only from the time of the last nine Shang kings, beginning with Wu Ding (proposed reign dates c. 1250 – c. 1192 BC), when the capital was at Anyang, Henan. Historic documents come mainly in the form of inscribed oracle bones that were used for divination; but besides oracle bones, a few bronzes were cast with ancestor dedications, which can also mention historic events. The present gui is one of these exceedingly rare vessels of historic significance.

While most Shang inscriptions are very short, often mentioning only a name, longer inscriptions appear on a few vessels from the last two reigns, known in archaeology as Period V, those of kings Di Yi and Di Xin, for whom reign dates of c. 1105 – c. 1087, and c. 1086 – 1046 BC, respectively, have been proposed. They continued into the Western Zhou (1045 – 771 BC), when they became more frequent. Very few of the Shang inscriptions are truly documentary, however, in recording an incident of historic interest; more typically, they refer to recurrent activities in the life of the rulers, such as imperial sacrifices or hunts. Fig. 2B A rubbing of the inscription of  the bronze You, Shang dynasty, in Hakutsuru Fine Art Museum, illustrated in Luo Zhenyu, Sandai jijin wencun (Surviving Writings from the Xia, Shang, and Zhou Dynasties), 1937, vol. 8, 1937, p. 33.

These inscriptions on our gui and its companions have been much discussed in the scholarly literature, and the interpretations by different scholars vary slightly, largely due to the fact that characters can be difficult to read. They have recently, however, been researched in detail by Wei Xinying (2015), writing from the Palace Museum, Beijing, who has been able to solve many of the previous uncertainties by studying these bronze inscriptions in connection with corresponding oracle bone inscriptions, which equally mention the Renfang campaign. Right: Detail of inscription of the present lot.

The 34-character legend on the present gui follows a characteristic pattern. It begins with a cyclical date and ends with a calendar date; it mentions a bestowal of cowries, the main form of currency at the time, which often is given as reason for the casting of a bronze, although some inscriptions list gifts of jade or horses instead; there is a place name, Shang X, which Wei has identified as a region roughly corresponding to modern Jiyuan county north of Luoyang in Henan; it names a donor, Hua, who would have been a royal officer who made the gift on behalf of the king; it gives the beneficiary of the gift, Xiaozi X, Xiaozi denoting some official function, while the identifying character thereafter is considered illegible; as well as an ancestor, Father Ding, for whom the vessel was cast, who might have been the direct father of the beneficiary or another relative of his father’s generation; further, it records the historical occasion, when this happened, the campaign against the Renfang; and it ends with a clan sign.

The character fang in Renfang is a general term for foreign, usually hostile tribes. The first character defining the name of the tribe is more complicated to unravel. The character on our bronze is believed to be 尸, a character today pronounced shi, which in early texts, however, was used instead of 夷, yi, and in oracle bone inscriptions can look very similar to 人, ren. Thus, the tribe is variously referred to as Yifang or Renfang.

Through the various records available, it has been possible to reconstruct the campaign to have been a nine-month long expedition undertaken by Di Xin, who himself embarked on the lengthy journey to Renfang territory, which is considered to have been a region covering parts of modern Shandong, Anhui and Jiangsu provinces. Wei has been able to compile a kind of time-line of the nine months the expedition lasted, by reconstructing its progress through twenty inscriptions on oracle bones and bronzes. She has established the campaign to have begun in the 14th ritual cycle (roughly equivalent to a year) of Di Xin’s reign, and to have ended in the 15th, with the date of the present vessel falling at the end of cycle 14 which, if the dates assumed for king Di Xin’s reign are correct, would be equivalent to c. 1072 BC (see also Keightley in Loewe & Shaughnessy, 1999, p. 248, note 26). It is extremely rare that an archaic ritual bronze vessel can be dated so precisely.

While according to Bagley (1987, pp. 525-530), such historic events mentioned on bronzes are often given only as markers of time and are not necessarily related to the manufacture of the bronze or its owner, in the case of this gui, the gift of cowries by the king appears to have been a direct reward for services rendered during the Renfang campaign, that is, the person mentioned on the bronze, Xiaozi X, was directly involved in the events and the casting of our vessel was a direct consequence of that historic episode. Wei infers that during the campaign, the Shang army was split into two branches, which were led, respectively, by Xiaozi X, who is named on the present gui, and Xiaozi Y, of the Hakutsuru you, as commanders.

In connection with another 11th-century BC inscribed bronze gui in the Sackler collection (Bagley 1987, no. 103) Bagley reproduces a list, first compiled by Chen Mengjia, of ten bronze vessels and four bones of animals killed in royal hunts, bearing inscriptions that can securely be attributed to the Shang, since they are naming a Shang sacrificial cycle. Besides those already mentioned in connection with the Renfang campaign, no other bronze he lists bears a direct reference to a historic event.

The style of our gui is characteristic of the metropolitan bronze making tradition of Anyang in Henan in the late phase of the Shang period, a style that continued into the Western Zhou. Wei (2015, p. 046, fig. 5) compares the present piece, to three other gui that can be attributed to Di Xin’s reign: one excavated from a tomb at Liujiazhuang Locus North, Yinxu, Anyang, which is very similar overall, but lacks the pendant flanges of the handles; and two with different decoration but showing these flanges, which are otherwise characteristic of the early Western Zhou period: the Sackler gui mentioned above, and a second gui from the same Liujiazhuang tomb. A similarly shaped and decorated gui, but with indented flanges, also from the Sackler collection, is illustrated in Jessica Rawson, Western Zhou Ritual Bronzes from the Arthur M. Sackler Collections, Washington, D.C., 1990, no. 42, where it is attributed to the late Shang or early Western Zhou and compared to three related excavated pieces of the early Western Zhou from Shaanxi and Henan, figs. 42.1-3. Gui were ritual vessels for offerings of grain, whose wide open shape made them ideally suited for long inscriptions.

Di Xin, the last Shang ruler, who lost the battle of Muye against the Zhou and with it the rulership of his dynasty, is in historical records treated overwhelmingly negatively. Although he is granted with having initiated fairly advanced economic and social policies, he is generally depicted as aggressive, cruel, extravagant, given to drinking and women, and is described by Keightley (Loewe & Shaughnessy 1999, p. 233) as ‘depraved’. Yet he is also characterized as courageous, confident, strong and an excellent hunter. Imperial hunts of tiger, rhinoceros and deer formed an important part of a Shang king’s official activities and are recorded on animal bones of Period V. An extraordinary bronze figure of a turtle with four arrowheads in its carapace is preserved in the National Museum of China, Beijing, which commemorates Di Xin’s feat of hitting a soft-shell turtle with his arrows and is inscribed to the effect (see Wei Xinying, p. 044, fig. 1.2). The successful battle of Muye was commemorated by the Zhou in an inscription on an early Western Zhou bronze gui, also in the National Museum of China, see Peng Qingyun, op.cit., no. 0363.

Literature: The inscription on this Xiaozi X gui has been known and studied since 1935, but the vessel itself had not been published until very recently, except in the 1970 Hauswedell auction catalogue.

Michael Loewe & Edward L . Shaughnessy, eds, The Cambridge History of Ancient China. From the Origins of Civilisation to 221 B.C., Cambridge, 1999.