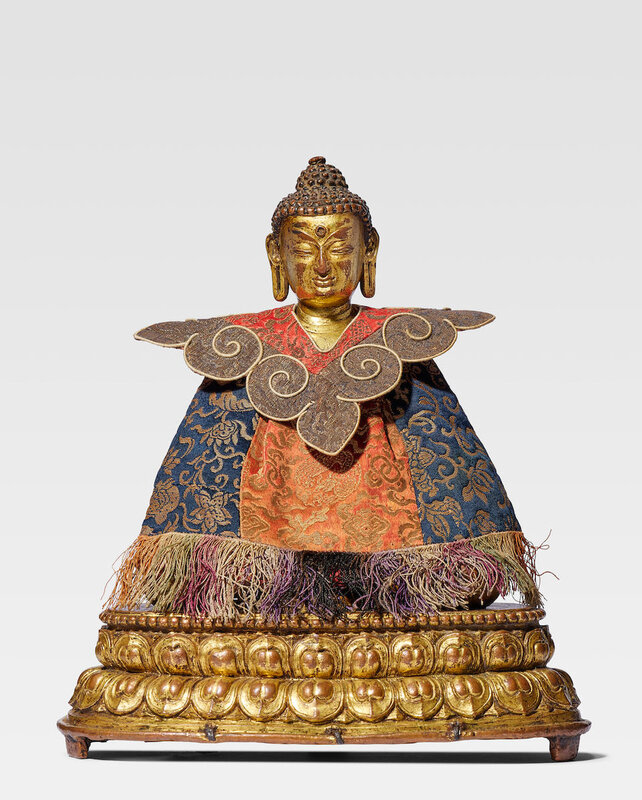 Of impressive figural volume and quality, this gilt bronze figure of Shakyamuni stems from the Khasa Malla Kingdom, which ruled over the Karnali Basin in western Nepal and parts of western Tibet between the 12th and 14th centuries. The Khasa Malla rulers were devout Buddhist patrons whose artistic commissions display a distinct stylistic identity.

Note: The arts of the Khasa Mallas incorporated stylistic elements from the neighboring cultures of western Tibet, Pala India, and the Kathmandu Valley. Due to their sustained interaction with the Valley, the Khasa Mallas benefitted most from Newari designs and expertise. The naturalistic and sensuous modeling of the present figure, for instance, is a hallmark of the Newari style. The notable losses to the gilded surface, caused by thin application and frequent rubbing during devotional practice, are also similar to those of gilt bronzes from the Kathmandu Valley.

Yet several features exhibited in the present work are distinctly Khasa Malla. For example, Shakyamuni's forehead differs from Newari types, which tend to be broader. Also, his eyebrows are high and slanting, his nose beak-shaped, and his mouth narrow with plump lips. Additionally, his wavy eyelids widen at the sides. Compare the almost identical physiognomy on a Khasa Malla Shadakshari published in Alsop, "The Metal Sculpture of the Khasa Malla Kingdom", in Orientations: Art of Tibet, Hong Kong, 1998, p.167, fig.9. The Shadakshari also has a similar base, with rounded, double-lobed petals under a thick beaded upper rim and a plain rear.

The Khasa Mallas enlivened their Buddhist sculptures with well-observed details, such as the present figure's defined knuckles and subtle toning around the shoulder muscles. These characteristics are repeated on a larger gilt bronze of the same subject in the Rubin Museum of Art, published in Vajracharya, Nepalese Seasons: Rain and Ritual, New York, 2016, p.72, no.17. Moreover, the Rubin Shakyamuni shows a double-layered 'fishtail' pleat over Shakyamuni's left shoulder, and plump hands and feet similar to the present bronze.