An extremely rare doucai and anhua-decorated 'dragon' bowl, Mark and period of Zhengde (1506-1521)

An extremely rare doucai and anhua-decorated 'dragon' bowl, Mark and period of Zhengde (1506-1521) the exterior of the deep rounded sides decorated in doucai with two dragons striding sinuously above tempestuous waves crashing against jagged rockwork, the continuous scene further accentuated with the spines of each mythical beast and the flaming wisps rendered in bright iron red, all between friezes of ruyi clouds encircling the rim and tall foot, the interior decorated in anhua with a pair of dragons encircling a central medallion enclosing ruyi clouds, the base inscribed with a four-character reign mark within a double circle.

Property from a Distinguished Private Collection.

Note: This magnificent bowl is a rare example of porcelains produced in the Zhengde period, with its unusual colour combination on the dragons. While the more commonly found dragon designs of the time are decorated in a single colour only, the attractive blue, green and red hues on this piece are remarkable. The contrasting colours highlighted the eccentric body of the powerful creatures, infusing life into the dynamic scene of dragons chasing the flaming pearl.

Doucai has been translated as contrasting, contending, interlocking, joined or dovetailed colours, referring either to the contrast of the mostly primary colours or the fact that overglaze enamels are fitted into underglaze outlines. The technique was first developed in the early Ming dynasty (1368-1644), refined in the Chenghua period (1465-87) when multi-coloured wares began to be used at court, and reimagined during the Zhengde reign as potters mixed the established colours in new combinations.

Although bowls of this type are rare, there are a few examples almost identical to the present piece being held in important museums worldwide; see two bowls preserved in the Palace Museum, Beijing (accession nos Gu 00145700 [https://digicol.dpm.org.cn/cultural/detail?id=58d0ac1d4a124ab6bbd6dd943312fcff] and Gu 00145701 [https://digicol.dpm.org.cn/cultural/detail?id=a850df24d6754e81ba6e2d67c2408e9b]), one of them illustrated in Wang Liying, ed., Zhongguo taoci quanji, vol. 12: Ming (shang) / The Complete Works of Chinese Ceramics, vol. 12: Ming (I), Shanghai, 1999, cat. no. 219; another in the National Palace Museum, Taipei, illustrated in Gugong Cang Ci. Ming Cai Ci Er: Chêng-Tê, Chia-Ching / Porcelain of the National Palace Museum. Enamelled Ware of the Ming Dynasty. Book II: Chêng-Tê and Chia-Ching, Hong Kong, 1966, cat. no. 5; one in the Nanjing Museum, included in the exhibition Chinese Porcelain in Underglaze Blue from the Nanjing Museum Collection, Sagawa Art Museum, Moriyama, Japan, 2003, cat. no. 40-1; and a further bowl in the Metropolitan Museum of Art, New York (accession no. 1991.253.54), included in the Museum’s exhibition A Selection of Chinese Ceramics from the Adele and Stanley Herzman Collection, New York, 1990. Compare other Zhengde polychrome bowls with a dragon motif, where additional colours were used on other decorative elements; see, for examples, two bowls in the National Palace Museum, Taipei; a blue and white one with iron-red clouds (accession no. Gu ci 010243 [http://antiquities.npm.gov.tw/Utensils_Page.aspx?ItemId=307069]); and the other with green-enamelled dragons and a band of doucai floral decoration near the rim (accession no. Gu ci 002812 [http://antiquities.npm.gov.tw/Utensils_Page.aspx?ItemId=299637]); both listed in Gugong ciqi lu. Di er ji: Ming / Record of Porcelains from the Old Palace. The Second Series: Ming, Taipei, 1963, vol. 2, part 1. 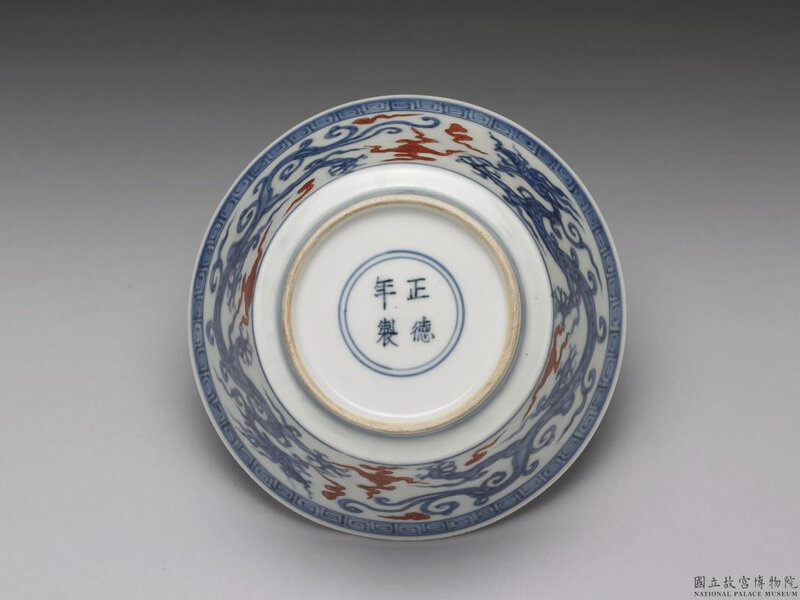 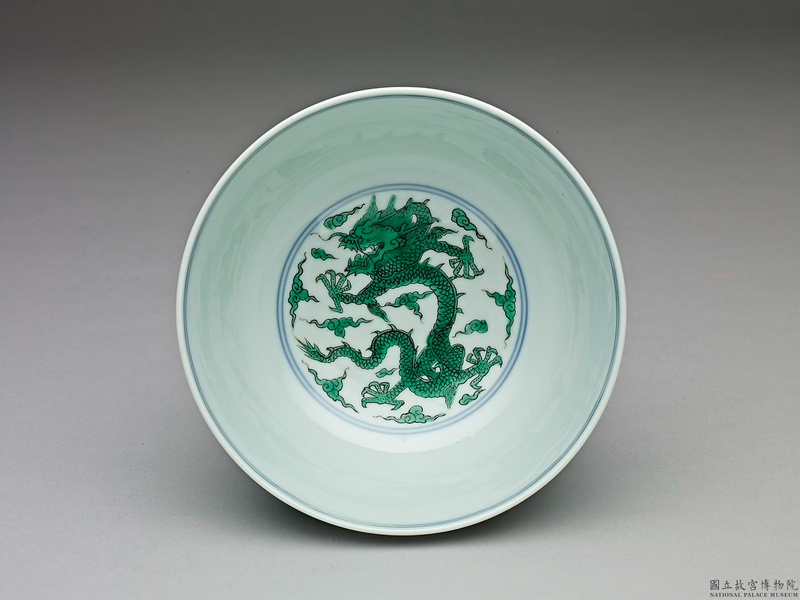