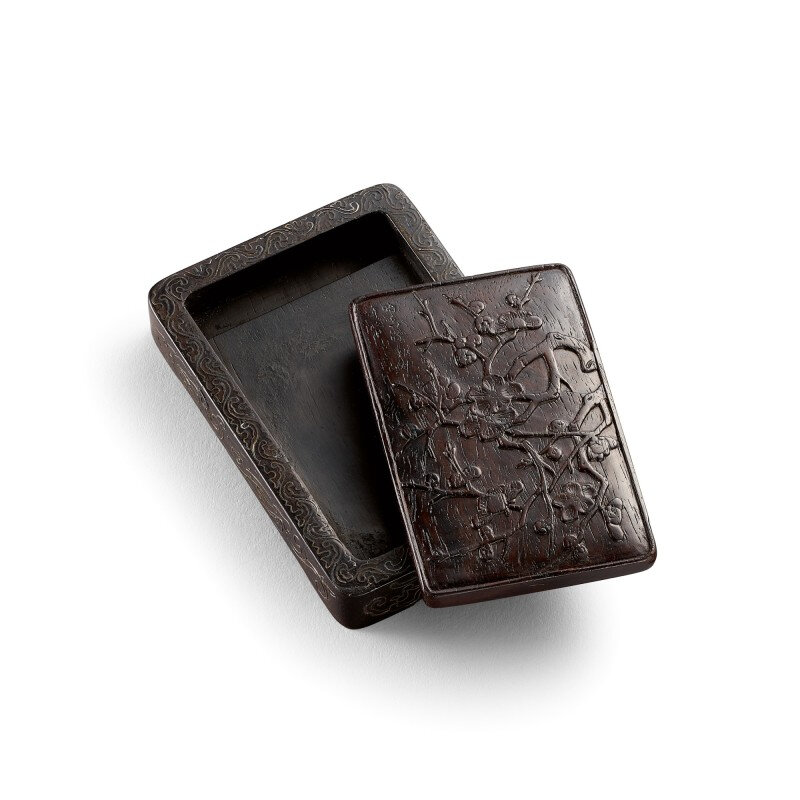 the inkstone bordered along the upper edges and sides with silver wire-inlaid bands of stylised scrolls, chilong and taotie masks, the underside with a signature reading Xuansu zhi ('made by Xuansu') and a silver wire-inlaid keyfret border enclosing a carved panel of flowering branches echoed on the cover, the cover further incised with an inscription reading an xiang fu dong yue huanghun ('a hint of fragrance floating in eventide').

Note: The inscription may be translated as follows:

The short inscription is an excerpt from a poem written by the Song dynasty poet Lin Biu (697-1028). Lin, a native of Qiantang (present day Hangzhou) in Zhejiang province, was renowned for his poetry and for being a recluse at Gushan on the West Lake (Xi Hu). He never sought office nor married but delighted in growing plum blossoms and keeping cranes which he referred to as his 'wife' and 'children' respectively. His poems are typically about the hermetic life and the tranquil state of mind. This excerpt is from one of his most famous poems titled Little Plum Blossom of the Garden in the Hills. The inkstone also bears the unrecorded wood carver's signature Xuansu zhi ('made by Xuansu').