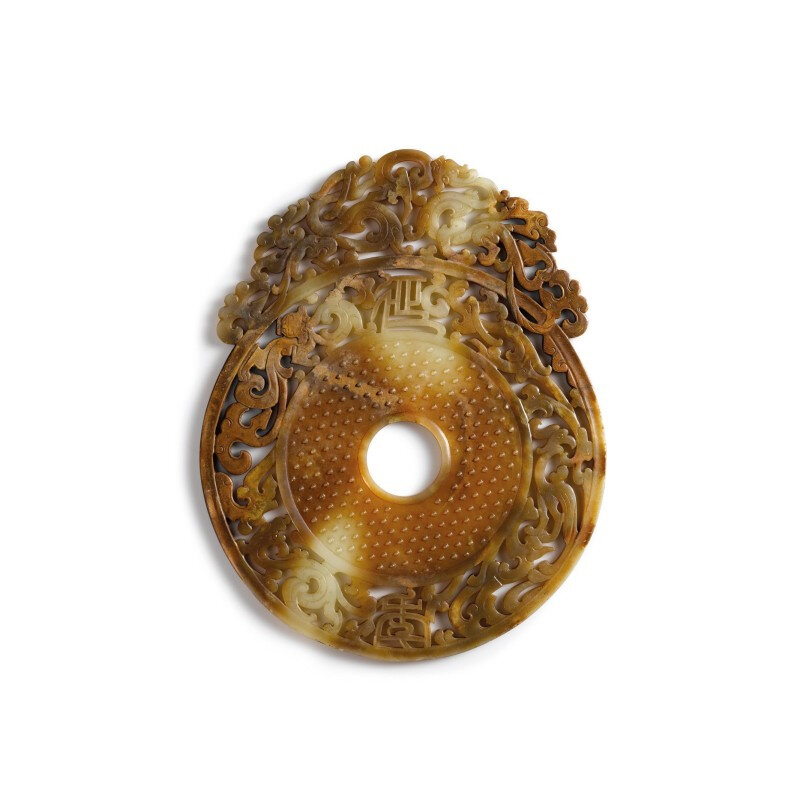 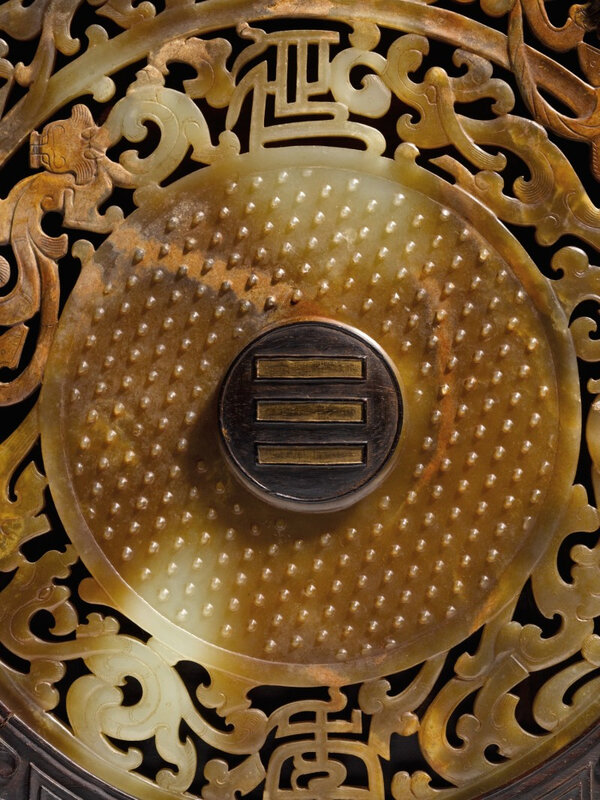 the exceptionally large jade bi dated to the Eastern Han dynasty, boldly worked on both sides with an overall array of small raised circular studs, encircled by an intricately reticulated band of the characters yan and nian at the top and bottom respectively, surrounded by two writhing dragons and one phoenix, the top with an extended openwork flange of a pair of confronting dragons, the outer edge masterfully inscribed with a long inscription in zhuanshu composed by the Qianlong Emperor and carved to his order, mounted within a carved zitan table screen, the front with a central carved wood boss with the trigram qian, which locks into the back panel to secure the jade, and carved with archaistic patterns to the front, the reverse carved and picked out in gold with an almost identical inscription written in lishu differing only in the date, ending with gengyin yuti (imperial inscription of the gengyin year), the stand and sides carved with further archaistic patterns.

The Qianlong Emperor of the Qing dynasty is undoubtedly one of the greatest in Chinese history in respect to his collections and his appreciation of artistic masterpieces. Archaic jade formed an important part of his collection and his search for outstanding archaic jade saw no limit. The overwhelming majority of the archaic jade masterpieces that have survived until now were originally in his collection. These archaic jade pieces were kept and used as decoration in the various halls of the palace after having been appreciated and examined by the emperor. The present auction includes a masterpiece that was appreciated by the Emperor - a jade bi incised in gilt with the calligraphy of the emperor and with the 'dragon and phoenix' motif.

A Han dynasty bi is placed in the centre of a finely carved mounting. The front of the mounting is carved with the 'universe and bagua' motif while the back of the piece is incised in lishu with the date 35th year of the Qianlong reign (equivalent to 1770 A.D.) and an Imperial poem. The mounting is made up of three pieces that can be easily taken apart for inserting the jade bi. The construction of the mounting and the overall design of this piece represent a very high level of artistic achievement.

The importance of this piece lies in the jade bi. Jade expert Deng Shuping from the National Palace Museum in Taipei examined this bi carefully. Below are her observations:

The jade is of white and yellowish brown colour and has a 'soft' quality. The bi can be divided into an outer and an inner circle. The inner circle has a 'milky nail pattern' and the outer circle is incised with four dragons and a phoenix as well as the two characters yan and nian in zhuanshu. On the upper part, extending out from the frame there are two dragons. One of the heads of the dragons is front facing and the other faces sideways. One dragon has a curled nose, long eyebrows and long flower-like horn while the other dragon is called a chilong that can be frequently seen on Han jade pieces.

Han chilong are sometimes depicted with a long horn between two shorter horns. The phoenix is depicted with its head held back as if crying and on the top of its head there is a long horn. The space between the dragons and phoenix is filled with decorative clouds. Archeologists have found a large number of Eastern Han jade pieces engraved with the 'dragon and phoenix' pattern which in its style is different from that made in the Western Han period. The carving on the present bi is characteristic of Eastern Han style. From its size, quality of carving and incised calligraphy we can safely assume that the present piece is an imperial work made for the palace.

This study by Deng confirms the importance of the present bi. Firstly, it is of late Eastern Han period (for example, see fig. 1); secondly from its size and weight, as well as the fine workmanship of its carving it can be attributed as an imperial article. Hence it undoubtedly occupied a significant position in the imperial collection. Next I would like to examine how the present bi may have entered the imperial collection. It is well known that the Qianlong Emperor was very fond of jade objects, especially pieces belonging to the three dynasties. He often examined and graded pieces personally. Imperial records show that all articles made of jade were given a grade such as jia and yi. Furthermore, after obtaining an archaic piece, the Emperor would write a poem to express his feelings or to praise the workmanship. He used jade for his study and to raise the level of his connoisseurship. He also used jade to express his emotions for the past. According to the records, the Qianlong Emperor wrote over forty-thousand poems, among which over 800 are on the subject of jade. The Qianlong Emperor not only collected archaic jade and wrote about them, he also had his poems copied onto the jade pieces. His writings provide important documentary evidence for our study and understanding of the Qianlong Emperor's jade connoisseurship.

The present jade bi appears to be one of the archaic pieces that the Qianlong Emperor paid closest attention to. For each piece of jade in his collection, he would without failure carry out his careful inspection and give the piece a 'connoisseur's comment'. For example on one occasion he wrote "jade of this type are numerous but when encountering the present one there is a need to write a poem"; another comment says, "I have many pieces but seeing this one gives me the opportunity to compose". These comments are the Emperor's reflections on his collection. After his examination, the Emperor would order the jade piece to be kept in the palace, placed in the 'hundred treasure box' (a box used for keeping his favourite works of art pieces) or have them mounted. Larger pieces were often inserted into precious wood mounting made of zitan or rosewood. The piece was then inscribed with the Emperor's calligraphy or poem, forming a perfect article of historical and artistic importance. For example, imperial records show that in the 35th year of the Qianlong reign, 'on the second day of the third month, Tai Jian handed in a piece of Han bi with the motif of 'sleeping cocoon', with the seal of a receipt from the Ruyi Hall. By Imperial Order: make a mounted jade bi.... On the twentieth day of the fifth month, a piece of Han jade bi with the motif of 'sleeping cocoon' is inserted into a dragon engraved zitan mounting. This is to be presented to the Emperor by Tai Jian. By Imperial Order: Give the inserted jade bi to Mao Qin and have the poem inscribed on the back. On the thirteenth day of the fifth month Tai Jian handed in a piece of inserted jade bi on zitan, accompanied with a plain piece of Han jade. By Imperial Oder: change the wood and insert the bi in the zitan mounting and engraved it with the 'Qian' character.

An imperial record dated to the 35th year of Qianlong's reign notes that in the Spring the Emperor saw a rare treasure, a large jade bi, and was deeply attracted to it. This 'treasure' was over one thousand and five hundred years old. The Emperor wrote a poem "in praise of the 'Long Life' Han jade bi" which was later included in the 86th juan of the Qing Gaozong yuzhi shi san ji. The Qianlong Emperor also ordered the jade carvers to incise his poem and to have the jade bi inserted into a zitan mounting with the same poem engraved on the back.

The present piece embodies all the design elements that the Qianlong Emperor regarded with great appreciation. It has his poem and is carved with the design of the 'universe and bagua'. It is undoubtedly an imperial masterpiece.

The poem can be translated:

In Praise of the Han Jade Pendant of Longevity
The carving of the Bi so intricate,
so delicately fine all around,
the chi-dragons restfully intertwined
Tie and wear it, honouring ancestors,
with a fine ribbon
In Three Dynasty objects
the jade respository is abundant
Similarly bearing messages -
blessings of happiness, may life be long
Alas, now unearthed to grace the world
Kindling the infinite quest -
"To whom did you belong?"