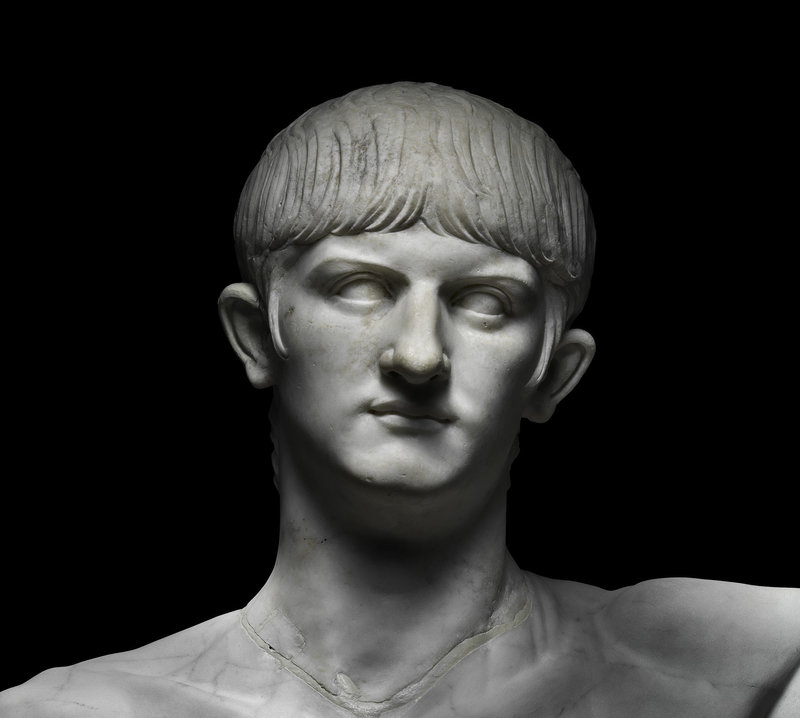 LONDON - This month the British Museum opens the first major exhibition in the UK on Nero, one of the most notorious ancient Roman emperors.

Nero: the man behind the myth explores the true story of Rome's fifth emperor informed by new research and archaeological evidence from the time, challenging the biased historical accounts written after Nero’s death that have shaped his legacy.

Recent discoveries relating to Nero’s fourteen-year rule reveal a more accurate picture. Treasures hidden during the destruction of Colchester in AD 60-61 during Boudica's Iceni rebellion, burned artifacts from the Fire of Rome in AD 64, and evidence from the destruction of Pompeii uncover a new understanding of Nero’s turbulent and misconceived reign. This major exhibition features over 200 objects, charting the young emperor’s rise to power and examining his actions during a period of profound social change in regions from Armenia in the Near East, to Britain, and across mainland Europe. Drawn from the British Museum's world-class collection alongside rare loans from Europe, most never seen in the UK before, the exhibition includes humble graffiti next to grand sculpture, precious manuscripts, objects destroyed in the fire of Rome, priceless jewellery and slave chains from Wales, telling the story of rich and poor alike.

Nero (r. AD 54–68), the last male descendant of Rome’s first emperor Augustus, succeeded to the throne aged only sixteen. Britain had been under Roman rule for just eleven years. During his reign of nearly fourteen years, he had his own mother killed, his first wife, and allegedly his second wife. Written accounts even claim that Nero himself started the Great Fire of Rome in AD 64. In June AD 68, when confronted with rebellions by insubordinate military officials, Nero was forced to commit suicide. The Roman senate immediately excised his memory from official records, and his name was vilified to legitimise the new ruling elite. The image of Nero as a tyrant created 50 years after his death by the historians Tacitus and Suetonius, and written about more than another century later by Cassius Dio, is a story that has been repeated for centuries. We now know that this Nero is a fabrication and that ancient sources stand between us and the historical character. This exhibition challenges traditional preconceptions and explores what the ancient elite narrative on Nero tells us about the inner conflicts of Roman society.

Statues of Nero were erected throughout the empire, yet very few survive due to the official suppression of his image. A star piece in the exhibition is a bronze head of Nero, long-mistaken as Claudius, which was found in the River Alde in Suffolk in 1907. The head was part of a statue that probably stood in Camulodunum (Colchester) before being torn down during the Boudica-led rebellion. A small bronze figure of Nero, lent by Museo Archeologico Nazionale di Venezia and seen in the UK for the first time, gives a rare sense of a complete sculpture. Portrait bust of the younger Agrippina, the mother of Nero. 37–39 AD. © The Trustees of the British Museum.

The Fenwick Hoard is another highlight of the exhibition, discovered in 2014 beneath the floor of a shop on Colchester’s High Street. The treasure was buried for safekeeping by settlers fleeing for their lives during Boudica’s attack. Among the items are Roman republican and imperial coins, military armlets and fashionable jewellery very similar to finds from Pompeii and Herculaneum.

Famously, Nero was the first Roman emperor to act on stage and compete in public games as a charioteer. Aged 21, Nero first took to the stage as part of private games, but a few years later he performed publicly in Naples and then in Rome itself. This event was described in hostile sources as unprecedented and scandalous, but contemporary evidence shows that Nero was hardly the first young man of good family to take part in public performances. Chariot racing, gladiatorial combats and theatre were incredibly popular in the Roman world, as shown by fascinating objects such as gladiatorial weapons from Pompeii on loan from the Louvre, stunning frescoes depicting actors and theatrical masks lend by Museo Archeologico Nazionale di Napoli. 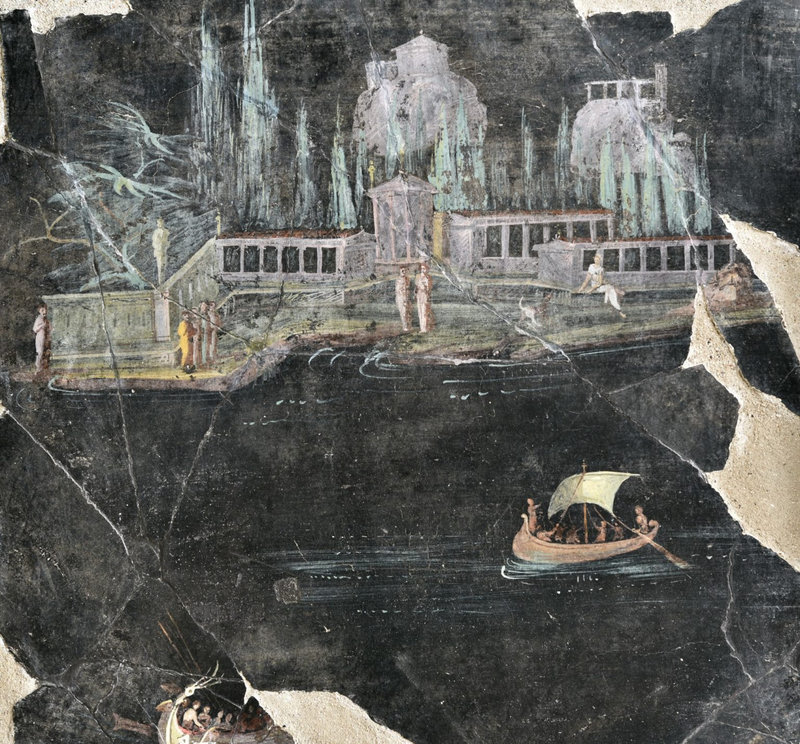 Nero’s Domus Aurea drew inspiration from luxury villas, many of which were around the Bay of Naples. Fresco of a landscape with architectures and boats, Pompeii, AD 1–37. With permission of the Ministero della Cultura ̶ Museo Archeologico Nazionale di Napoli.

One of the defining moments of Nero’s reign was the Great Fire of Rome in AD 64, which burned for nine days and laid waste to large parts of the city. Excavations in recent years have revealed the true extent of the ferocity and impact of the fire. A warped iron window grating, discovered near the Circus Maximus, is displayed in the UK for the first time, as testament to the intensity of the flames and destruction.

Nero, who was in the nearby city of Antium rather than in his palace watching the inferno, led the relief and reconstruction efforts. A new palace, the Domus Aurea, rose from the ashes. Stunning frescoes and wall decorations will give visitors a taste of Nero’s opulent residence. The elaborate designs and the use of precious materials such as exotic marbles, cinnabar and gold speak to the height of imperial luxury. Gold bracelet in the form of a coiled snake, Pompei, Italy, AD 1-100. © The Trustees of the British Museum.

Thorsten Opper, Curator, Ancient Rome, British Museum, said ‘The Nero of our common imagination is an entirely artificial figure, carefully crafted 2000 years ago. It is fascinating to unravel how and why this was done. The exhibition - from court art to street graffiti - reveals a society that was prosperous and dynamic, yet full of inner tensions, which erupted in a violent civil war after Nero’s death. The objects tell these stories, starkly and immediately.’

Hartwig Fischer, Director of the British Museum, said ‘Nero: the man behind the myth is the first major exhibition in the UK to look beyond the commonly held view of Nero as the Emperor who fiddled while Rome burned. The exhibition’s representation of Nero is one that resonates with our times, in a world with deepening social and economic challenges, contested facts and the polarisation of opinion.

I would like to express my gratitude to our long-term exhibition partner bp. Without their support, the British Museum would not be able to present such exhibitions, allowing visitors to explore the complex character of Nero – real and imagined.’ 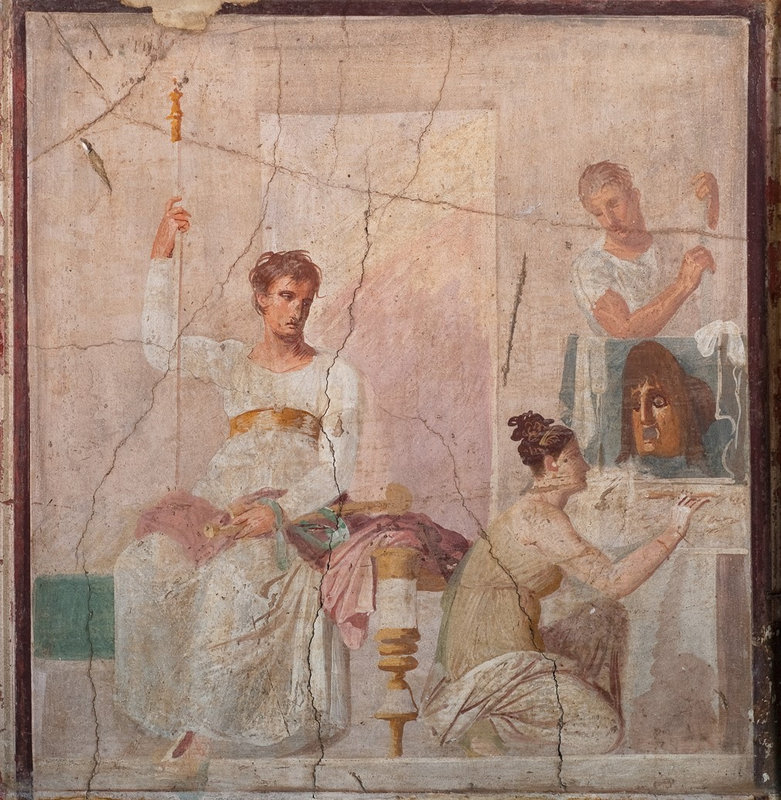 Fresco of a seated actor dressed as a king and female figure with a small painting of a mask, Italy, AD 30–40. With permission of the Ministero della Cultura ̶ Museo Archeologico Nazionale di Napoli. 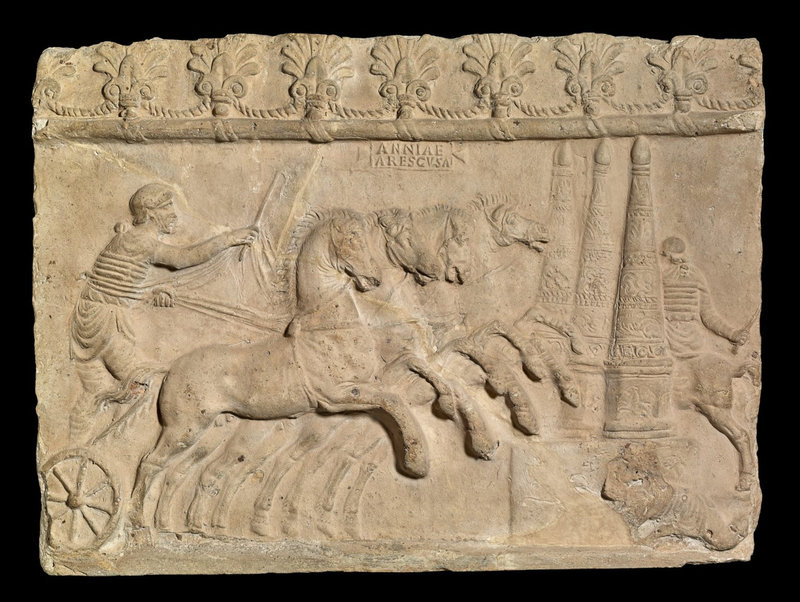 Terracotta relief showing a chariot-race, Italy, AD 40–70. © The Trustees of the British Museum Bronze head of the emperor Nero, found in England, AD 54–61. © The Trustees of the British Museum The recently excavated Fenwick Hoard was buried for safekeeping during Boudica’s attack on Colchester. The owners of these objects, a Roman veteran and his wife, never managed to retrieve them. AD 60-61 © Colchester Museums. Fragment of wall painting from Nero’s palace, the Domus Aurea. AD 64–68. © The Trustees of the British Museum The gates of the temple of Janus in Rome were symbolically closed during periods of peace and opened in times of war. In AD 66, Nero closed the gates of the temple, marking the end of war with Parthia. This act was celebrated with the issue of a special coin, showing the temple with its doors closed. Minted in France, 66 AD. © The Trustees of the British Museum

Inscription from the tomb of Epaphroditus, Nero’s secretary. Cast of original from AD 69–96. With permission of the Ministero della Cultura  ̶  Museo Nazionale Romano. Head from an over-life-sized marble statue of the emperor Vespasian, probably re-carved from a portrait of Nero. Roman Imperial, 70–80 AD. © The Trustees of the British Museum