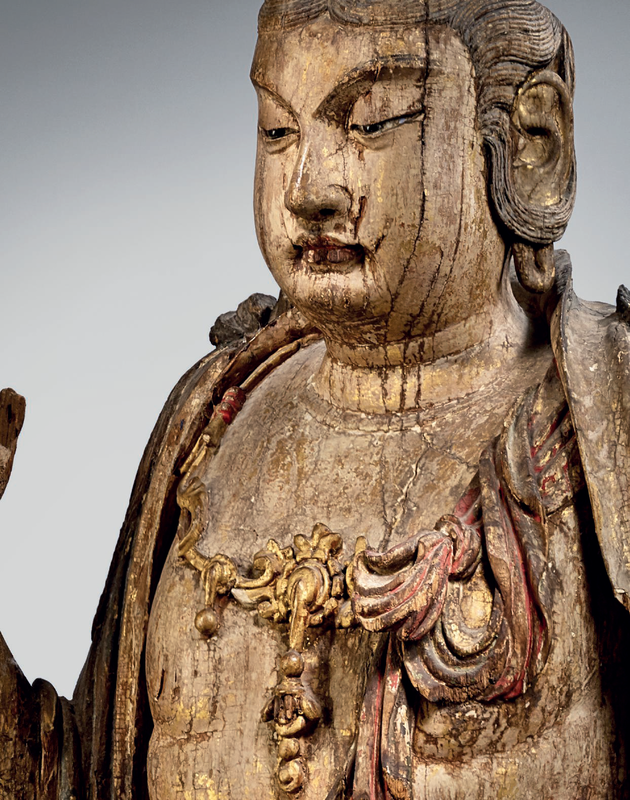 Provenance: Collection Paul Guillaume (1891-1934), Paris (by repute), thence by descent in the family.

Note: The bodhisattva Guanyin, whose name in Sanskrit is Avalokitesvara, is an important figure in the Mahayanist Buddhist tradition. The Sanskrit name derives from two parts – avalokita, meaning ‘seen’ – and ishvara, meaning ‘lord’. The meaning is therefore either ‘the lord who is seen’ or ‘the lord who sees’. In either case it is the presence of the deity amongst the people of the world, and his accessibility, that is emphasised. The full name in Chinese is Guanshiyin – ‘one who hears the sounds [prayers] of the world’. The impression is of an omnipresent deity to whom mortals may turn in times of trouble. Guanyin is a bodhisattva, which means that he is one who has attained enlightenment, but who has deferred entering nirvana and Buddhahood in order to help allay the suffering of others and help them to attain enlightenment. In the Chinese translation of the Saddharma Pu, arika Sutra (Lotus Sutra), the Indo-Iranian Kumarajiva (ca. AD 350-410) refers to Guanyin as the ‘Bodhisattva of Infinite Compassion’. With the rise of the Pure Land School of Buddhism in China in the 7th century, Guanyin became one of the most prominent figures in the Chinese Buddhist pantheon. During the 12th century, the bodhisattva began to be associated with a female manifestation, which gained momentum in the succeeding centuries until Guanyin was seen as the ‘Goddess of mercy’.

In Pure Land Buddhism, Guanyin is identified as one of the counsellor-emissaries of the Buddha Amitabha – the Buddha who presides over the Pure Land or Western Paradise, and in a second translation of the three sutras that comprise the Pure Land Sutra, Guanyin is identified as the successor to Amitabha. The same translation notes that any virtuous man or woman who finds themselves in trouble may entrust themselves to the Bodhisattvas Avalokitesvara or Mathasthamapraptra, and they will be saved. Representations of Guanyin, therefore, may sometimes be identified by a small figure of Amitabha at the front of the diadem.

This bodhisattva is shown in simple, but princely robes. The lower body and legs are clothed in a paridhana or long dhoti, which falls in elegant, natural folds. His chest is bare, but a long sinuous scarf crosses it obliquely, is tied on the left shoulder, and is draped over the right arm. The bodhisattva wears jewellery appropriate to his princely rank in the form of a necklace and bracelets.