Crisply carved with four horizontal ribs around the body and neck, the body with a shallow-relief symmetrical design of C-scrollwork on both sides, the stone of white tone with minor cloudy-white and russet inclusions.

Note: The luminous tone of the stone of the present piece is further accentuated by the archaistic low-relief carving. In the subtle curves of the form, the craftsman has successfully captured the stone's innate beauty. The Qianlong emperor commissioned a large number of jades which were inspired by the forms and designs of antiquity. Jade carvers were encouraged to study archaic bronze vessels in the Qing Court Collection or in illustrated woodblock prints, and adapt them to the medium of jade. Inspired in its decoration by archaic bronzes, the present lot epitomises this trend. Of compressed globular form supported on a short spreading foot, the body superbly carved in low relief with the bajixiang beneath an everted rim carved in openwork with foliate scrolls, the domed cover similarly carved in openwork, surmounted by a large peony flower-head finial, the stone of rich dark-green tone with dark speckles.

Note: See a similar example illustrated by Yang Boda, The Cream of China's Ancient Jade Article (1995), no. 178, a pale green jade example; and Zhang Guangwen, Jasper Wares of Qing Dynasty Collected by the Palace Museum and Manasi, 2014, no.65. Each bowl skilfully carved with generous rounded sides gently flaring from the foot towards the rim, the domed cover with counter-sunk knop, the semi-translucent icy-green stone mottled with white and moss green inclusions, wood stands.

Note: Compare with a very similar jadeite bowl and cover, Qing dynasty, illustrated in Masterworks of Chinese Jade in the National Palace Museum: Supplement, Taipei, 1973, no.37. Another similar jadeite bowl and cover is illustrated in The Complete Collection of Treasures of the Palace Museum, Treasures of Imperial Court, Hong Kong, 2004, p.226, pl.202. The thick-walled washer of triangular shape, carved as a gnarled trunk issuing intertwined openwork branches on the sides amongst prunus blossoms and buds, the stone of very pale green tone with minor cloudy-white inclusions, wood stand.

Note: The present washer is notable for its intricate carving of blossoming prunus branches extending from a bowl in the form of a gnarled piece of wood, and the fine quality of the stone.

By carving the jagged prunus branches in the round, the craftsman created a remarkable vessel for the scholar's studio. The design may have been inspired by rhinoceros-horn raft cups dating to the late Ming period, which were often carved in a way that mimicked a hollowed segment of a gnarled tree trunk detailed with naturalistic knots and twisting boughs. 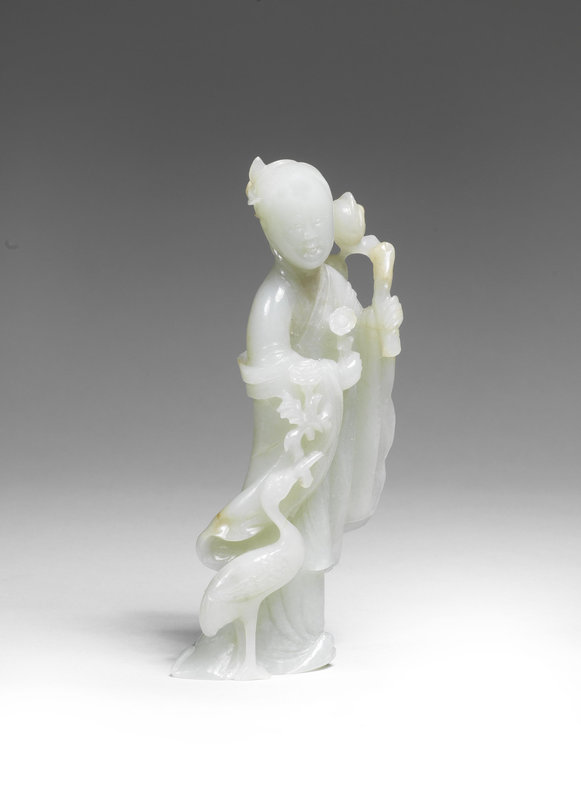 The Daoist Immortal well carved standing beside a crane grasping a leafy peony spray in its beak, her waist slightly bent, holding a gnarled leafy peach branch in her left arm, her right hand holding a flower, dressed in long robes, her face with a benevolent expression, the stone of pale green tone with russet-brown inclusions, wood stand.

Note: See a similar jade carving of a female Immortal, Qing dynasty, illustrated in the Compendium of Collections in the Palace Museum: Jade vol.8, Beijing, 2011, no.258. The pear-shaped body supported on a tall and slightly spreading foot encircled by rope-work, rising to an elegantly flaring rim, carved with a relief band enclosing archaistic phoenixes in mutual pursuit of a roundel, one side with a loop handle, the stone of pale green tone with russet streaks.